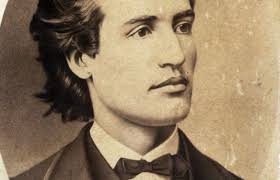 The world was prematurely robbed of a powerful Nationalist thinker.

It is an intriguing physiognomy.  One might mistake him for a cross between a Southern Italian and a Russian.  He almost looks like an Eastern European Mussolini.  As with many of his countrymen, his features combine the “Latin” and the “Slavic” looks.

To add to the exoticness of his appearance, the mid-to-late 19th century Romanian poet and editorialist may have had a bit of distant Armenian ancestry from two centuries before.  Armenian merchants had long ago travelled through the relatively cosmopolitan port towns of Moldavia, where they were usually welcomed by the locals as much more trustworthy alternatives to the economically aggressive Jewish merchants who carried out the same economic functions.  Another theory of where he got his dark features, also consistent with the history of Moldavia, is that his family tree included centuries-old Tatar origin.  (The anti-Turkic man himself preferred the Armenian theory.)  More recently in his lineage, and like many other Moldavians, he also had some Slavic blood.

North, south, east, and west all come together in this strangely striking face, a face from the seat of the ancient Getae.  It is a face that has become more iconic for his countrymen than it ever was for the author himself, whose ideal physical type was evidently blonde and blue-eyed.  This is the face of Mihai Eminescu, known in Romania as the country’s national poet, but virtually unknown in the English-speaking world.

Of peasant origin on his father’s side and descended from Moldavian aristocrats on his mother’s side, Eminescu did not put his inherited wealth to waste.  Educated in the German language since childhood, Eminescu was culturally, if not always geopolitically, an enthusiastic Germanophile.  As a young man, he studied in Vienna and in Bismarck’s Prussia, where he learned Sanskrit and immersed himself in the philosophy of Arthur Schopenhauer.  He was also a student of Eugen Dühring.

Eminescu had intellectual precedents in his own country, but he often made radical departures from them.  His ideas were influenced by a leading conservative Romanian cultural circle called Junimea, which originally reflected the interests of the old Moldavian boyar class that had been displaced by the liberal bourgeoisie in the 19th century.  However, there are significant differences between Eminescu’s philosophy and Junimism.

“The Junimists,” for example, “wanted literature to be separated from politics; to remain l’art pour l’art, with no social content desirable.”[1]  Eminescu rejected this doctrine.  He has also been accurately described as “less of an elitist” than the prototypical Junimist.[2]  Another difference is that “Junimism was opposed to anti-Semitism, considering it to be a barbarous affront to human intelligence.”[3]  Although Eminescu’s political and economic anti-Semitism was never unqualified and rarely extreme, he did explicitly distrust what he regarded as undue Jewish influence over his country.

One source on this subject claims Eminescu “stood out as the most eloquent spokesman of the radical anti-Semites.”[4]  Eminescu viewed this relatively recent immigrant population, by and large, as inherently unpatriotic.  He has been described as a fierce opponent of Jewish civil equality, arguing that “they presently constituted a danger to the Romanian nationality, when they did not possess equality of rights.  They would be so much the more a peril once naturalized.”[5]

On the other hand, he laid the ultimate blame on the liberal Romanian bourgeoisie, far more than on other ethnicities, for Romania’s social problems.  He also hated the initially Ottoman-appointed Phanar, which had misruled his country’s principalities from the 18th century to the early 19th century.  This accounts for the seemingly anti-Christian themes in his poetry, which should be seen as a form of protest against an institution he felt had ruined the Orthodox Church, not an attack on the Christian religion as such.  His ethnic nationalism was synthesized with a Moldavian local patriotism; Bucharest he regarded as having lost both its moral and its racial character to immigrants and liberal decadence.  One historian summarizes Eminescu’s views thus:

“Eminescu’s goal — he defines it as his ‘supreme law’ — was the preservation of his country and its ethnic identity… Consequently, the national interest must determine every political, educational, and cultural decision.  Thus, in Eminescu’s eyes, what he called ‘American liberalism’ (or Western humanitarian values) might imperil the uniqueness of the Romanian ethnic character, and should therefore be rejected… He rejected the incomplete and superficial Westernization of 1848.  Eminescu recognized only two positive classes in Romania: the nobility, and, above all, the peasantry.  Any development must be based on the peasant, and it must be an organic one… Eminescu was closer to the peasants than to the boyars.” [6]

Eminescu’s editorials combine ethnic nationalism, anti-liberalism, cultural traditionalism, authoritarian populism, and antibourgeois economic paternalism.  His poems deal with a wide variety of topics, including philosophy, nature, love, death, fantasy, history, and politics.  While the rhythmic musicality of his poetry usually gets lost in translation, the powerful brew of striking imagery and lucid ideas in his work is easy to understand in all languages.  And though the accusations of humorlessness leveled at Eminescu are false, it is true that the hilarious but hateful witticisms in his editorials do nothing to brighten his body of work’s grim tone.

Writing from the 1870s to the early 1880s, Eminescu spent the latter half of the 1880s in poor physical and mental health.  It has been widely theorized that his 1889 death came as a result of either medical malpractice, foul play, or both.  He was only 39 years old.

In Romania today, the media is mainly owned by George Soros and by World Jewish Congress president Ronald Lauder.  The contemporary “Romanian” media approaches Eminescu in a number of ways, but mostly two.  Either he is vilified for his political incorrectness, or his image is depoliticized and emasculated.

His metric style is attacked as too conservative and for being modeled on the golden age of German Romanticism; his rejection of new styles popular in contemporary France is taken as a sign of philistinism.  More maliciously, his work’s political content is dismissed as outdated or provincial.  In fact, his political thought is eerily farsighted in places, even if parts of it seem quaint.

However it happened, there was nothing glamorous about Eminescu’s death at a young age.  It robbed the world of a serious thinker and philosophical poet.  His nationalist ideology, like many others, was not intended for export, but can be learned from abroad just the same.