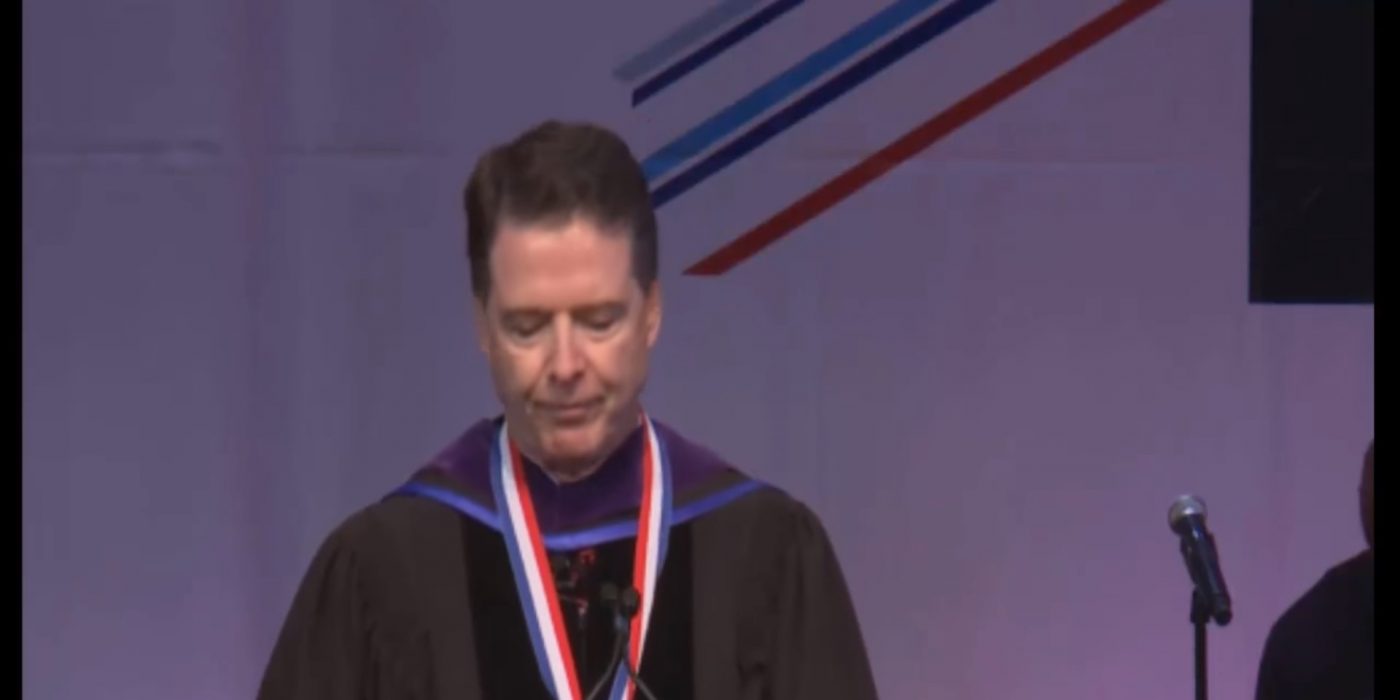 Comey Shouted Down At Howard University

These people don’t care if you’re on their side. Time to wake up and sack up.

James Comey was poised to receive that most precious commodity: approval from Black people.  Instead, he received a category 4 chimpout.  Such are the ways of the American Black, the most whimsical and petulant creature to exist on this good green Earth.

Comey thought he would be a hero at the historically Black college Howard University.  After all, he’s against Trump, and Blacks hate Trump.  Using the deductive skills he honed as director of the FBI, he thought that the transitive property of hate would guarantee that de brothas would be on his side.

Sadly, it was not to be.

His speech was interrupted by that special brand of Black; the martyred, committed, political Black.  Unfortunately, this type cannot grasp the issues at stake, and therefore tends to make fools of themselves and create an overall embarrassing situation for everyone around them.  This was the case here as they chanted, with fists raised in defiance against an imaginary oppressor, “We shall not be moved.”

Comey naively thought he could explain to the “enthusiastic” Blacks some of the basis for civil dialogue which Whites take for granted.  He gave the following lecture from the stage mid-speech:

He then looked out at his Howard University audience, still chanting, still luxuriating in their victimhood, and ever so slightly nodded his head, as if to say, “This isn’t going to work.”

Other chants included the classic, “No justice, no peace,” and “Get out James Comey, you ain’t our homie.”

Not all the Blacks participated in the chimpout, but the ones who were not actively participating did not seem too distressed by it.  Rather, they just looked on amused, not caring about the humiliation of the former FBI director, not bothering to protect his dignity.

When some university officials finally did try to intervene and tried unsuccessfully to persuade the belligerent Blacks to let Comey speak, the protesters had this ingenious retort: “White supremacy is not a debate.”

[Comey] represents an institution diametrically opposed to the interests of black people domestically and abroad. While his tenure at the FBI has finished, his impact on our community remains.

In other words, the FBI has had the gall to hold (some) Black people accountable for their crimes.

Of course, it is hard to feel bad for Comey.  Instead, this is a teachable moment.  Like the illegal immigrants who shouted down Democrat Minority Leader Nancy Pelosi for daring to meet with Donald Trump, these Blacks prove that they are immune to the usual political alignments.  They either don’t understand or don’t care about Comey’s implicit message—“I’m on your side.”   Certainly, Pelosi thought this sentiment would be understood by her illegal immigrant friends.

But is is simply not understood.

These people want total capitulation.  Call it hyperbole, but there is no other way to interpret these types of events.  What makes them newsworthy, of course, is the irony of these figures of the left (in Comey’s case, perhaps more a “symbol” of the left) getting a lesson in real time on race.  Their deer in the headlights response, as they try to patiently explain to their pets about their good intentions, makes it all the more amusing.

Even the former head of the FBI trembles in fear and bows the knee to the Blacks. Let that sink in. These are the spineless worms running our country.

But they are not to be feared, only endlessly derided and mocked for the weaklings that they are.