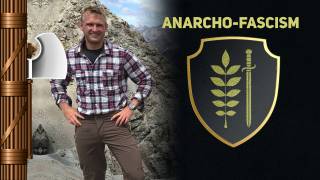 A book review by Anton Stigermark.

In his book, Anarcho-Fascism: Nature Reborn (LogikFörlag), the author Jonas Nilsson takes aim at some of the tensions which he argues lies dormant in Swedish society, and rather than picking at the Gordian knot he solves the problem with an Alexandrian cut.

Political theory is a rather rare genre in Swedish society; especially the kind which is put forward outside of academic life. One reason is surely that the public interest for such is rather low, and that it is a feat to make the genre interesting. Political theory can, however, be made interesting when it is combined with criticism of contemporary society and thereby takes a more ‘hands-on’ approach to problems as they are perceived by the public.

The idea of this book comes from the author’s bachelor’s thesis, defended at the Swedish Defense University earlier this year. In it, he investigated as to why American nationalists and libertarians could unite under the banners of Donald Trump. The question is interesting because the Alt-Right movement has a clear authoritarian streak to it and claims identity to be its core value. The heartland of the libertarian movement is, on the other hand, freedom which obviously can be hard to synthesize with authoritarianism. The problem from the viewpoint of political science should be quite clear.

This relationship is as contradictory as the term ’anarcho-fascism can be said to be, but the concept will be explained during the book. Fascism should in this context not be understood as corporatism, a passion for violence and the cult of the great leader. The meaning the author wishes to convey by using the term is that every society needs a sense of strength and hardness if it wishes to compete successfully with other societies. The term ‘anarcho’ should in a similar way not be read as if referring to political anarchism of the black flag variety, but more in the sense that every society, aside from strength, needs a degree of internal freedom too if it wishes to compete successfully.

The author works from the premise that an economy strained by hard regulations will be less successful and operate at less a capacity than what a freer economy would. The inner freedom thus becomes as necessary for survival as the capacity for defense can be said to be.The putting together of ’anarchy’ and ’fascism’ thus produces two distinct strategies for societal survival. The first one describes how relations should be conducted within the group in a context where freedom is a good thing which should be encouraged. The second describes how the group should act in relation to other groups, and here freedom is of lesser importance than strength and the maximization of security. Inclusion is often put forward as a cardinal Western value, the author of this book claims the opposite. In Anarcho-Fascism, the distinction between in-group and outgroup is the cardinal value.

A viewpoint of mine is that the author´s concept of anarchism and fascism should have been qualified in a more thorough way. Nilsson makes his own use of these terms, but he should have written a few lines of what they mean and are thought of in more conventional discourse.  When dealing with established concepts, in a way that breaks convention, it is always a good idea to be clear on the distinctions. The discussion that follows is more hands-on and the author takes aim on the feminization of Swedish society, the consequences of the erosion of our ability to defend ourselves, mass immigration and unhealthy reliance on the state. The chapters are thematically divided in the order that follows: 1) The Lie, 2) War, 3) The State.

The chapter called The Lie discusses how Swedish society has become affected by the 200-year long absence of war. This has led to a strange situation in which the Swedes have become damaged by the absence of conflict and threat rather than because of it. This takes the discussion into a clinch with concepts like feminism and social constructivism and the approaches to the world that they inspire. When it comes to these discussions, the subtitle ‘Nature Reborn’ is more present than anarcho-fascism can be said to be.

The lie in this context aims at the social constructivist idea that humans can become whatever they want to be through social processes; rather than accepting that nature draws a line regarding what can be accomplished through socializing. An example of this is the recruitment of women to the Swedish military forces. The notion here is that women can be used for the same missions as men since gender differences only exist in the mind. At the same time, the Swedish military virtue signals that they have no ambition to defend the actual Swedish people, but rather wises to defend ideological notions that now are attached to the state.

Nilsson presupposes that there are human behaviors that are not socially determined and thereby can be said to belong to the kingdom of nature rather than that of morality. The conflict here is between social constructivism and the contrary proposition that certain things are natural rather than socially made. The discussion aims at describing what happens when a society disregards nature and starts following notions of ideological fantasy. At this point, the author should have expanded his theoretical discussions on both social constructivism and feminism, since they are of importance to the critical approach of the book.

Anarcho-Fascism describes how the outer perimeter is about to collapse, much because the politicians and the Ministry of Defense seem uninterested in holding it. This problem does not, however, seem like the most important now. The most important problem is rather the internal one which is created by immigration and the great replacement of the Swedish people. This question can also be connected to the previously discussed problem of natures versus social constructivism since the ideas of both integration and assimilation is connected to it. Nilsson rather entertainingly disregards the idea of ‘open Swedishness’.

I was born a Swede and I will die a Swede, regardless of how I choose to live my life. Thus,” Open Swedishness” is a totally unreasonable concept. Of what does this Swedishness consist – the consensus culture? The Law of Jante? This is a Swedishness that I will fight until the day I die, and that will not make me any less of a Swede. (P. 46).

The war becomes a consequence of the lie. The lie about absolute equality can only exist because there is, now, no pressure strong enough to call the bluff. This is really what is meant by the phrase ‘nature reborn’. The thesis I take from the book regarding Sweden and Western civilization as such is that they are plagued by tensions that go back to several errors. Mainly these: 1) The inability to see the difference concerning what humans truly are and what we wish our species to be. 2) The inability to understand that the relation to our own group cannot be transferred to other groups.

It is really in the third chapter that anarcho-fascism as a political concept is launched, and is put against a more state-centric view of society. In my reading of the chapter, its meaning is to present a vision or a way of dealing with the problems which are discussed in the previous chapters. The chapter doesn’t describe how we should seize power from the state, either through democratic- or vanguard politics. Anarcho-fascism as a political theory rather wants to point of a scenario where every man should be his own jarl as far as this is possible.

The problem this creates, and that the author doesn’t really deal with, is how this vision of freedom goes along with the current trend of globalization? Most visions of the future predict larger political units, not smaller ones. It is often said that it is not enough with the resources one nation can mobilize, but that it is necessary to mobilize entire civilizations to pursue the political tasks of the future. One can take as examples Richard Spencer’s thoughts about the resurrection of a new Roman empire, or Guillaume Faye’s vision about the Euro-Siberian pact. This question is left hanging in the air, and the author should deal with it in coming publications.

To put some perspective. Anarcho-fascism is a book that puts forward a qualified description of the problems in Swedish society. The author takes aim on social constructivism and the inability of many to come to terms with the reality that there is a limit to the social changeability of human nature. He also points to the similar inability of many, including most of our politicians and intelligentsia, to understand that the attitude we have in relation to those of our own group cannot be transferred to those belonging to another group. The book is not, however, limited to describing problems, but ends with pointing out a positive vision of how we can overcome the current dilemmas. Most importantly, unlike a lot of Swedish oppositional literature, which looks more to the past, this book is nostalgic about the future.