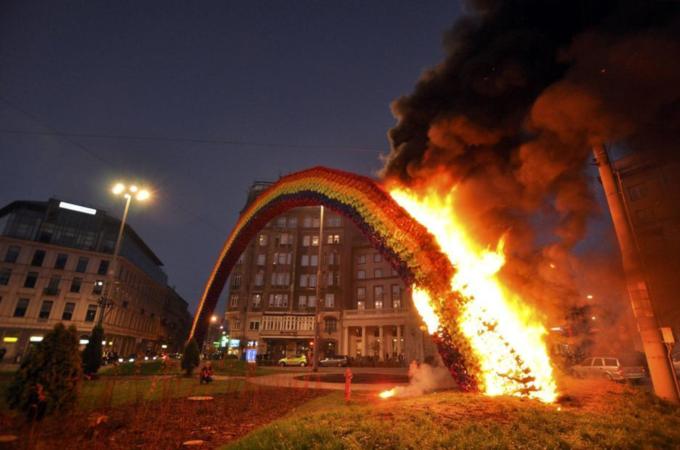 The Rainbow Nation Is Tearing At The Seams

Obama is/was wrong about literally everything.

In the aftermath of the unrest we saw in Charlottesville, Virginia this past weekend, Barack Obama predictably took an opportunity to reinject himself into the national spotlight by quoting Nelson Mandela. The quote reads, “No one is born hating another person because of the color of his skin or his background or his religion…”

Although we do not know for sure, since it is only one quote and it really only relates to one aspect of human psychology, I am pretty comfortable saying that underlying this particular quote is a much broader assumption about human nature, an assumption so false that even Google must enforce it to keep it afloat. It is the Boasian assumption that we are born with no instincts or predispositions, natural temperament or raw ability, we are, as it were, nothing but “blank slates” into which culture is thrown. This assumption is false. It is astoundingly false. Indeed, it is a viewpoint contradicted by copious, near-infinite quantities of scientific data.

While it is true that, strictly speaking, human beings are not born with hate in their hearts, it is not true that in-group favoritism and out-group prejudice are not essentially in-built. And this statement applies to members of all groups, not just white people, no matter how badly the anti-whites in the media would like you to believe otherwise. In other words, the human mind and human nature are somewhat mutable and plastic, they just aren’t infinitely mutable or plastic.

From the moment we begin to generate a personal identity, we also automatically start linking our own egos/selves to those who are like “us”, while delinking ourselves from those who are like “them”, whether racially, politically, or religiously. “Identity” is therefore inextricable from the cognitive biases that favor those like us and disfavor those unlike us, in part because in our minds, those within our group are essentially extensions of ourselves and our egos. Furthermore, the stronger one’s identity, the stronger out-group prejudice tends to be. Consider various present or historic racial leaders and advocates, whether you agree with their politics or not. Is it not true that they tend to have a very strong sense of group identity? They do not always appear to have a strong sense of group identity to be sure, but the tendency is hard to deny.

The problem is that both democracy and meritocracy depend upon our ability to fairly and accurately judge others. In diverse societies, we basically can’t-do that. The news media was not wrong to link much of the criticism of Barack Obama to White racism. Nor is the Alt-Right wrong to link much of the criticism of Donald Trump to White haters, in particular members of the US power structure of Middle Eastern descent and to a lesser extent African descent, who often have a deep sense of antipathy toward white people, especially those white people, like Trump, who do not want to off themselves and their civilization. Indeed, I would submit to you that the reasons our leaders are basically all nitwits and our universities basically all failures are intimately linked to this “diversity” dilemma.

So, in sum, Barack Obama’s quote was, strictly speaking, accurate. It is the spirit of the quote that is essentially false and the likely underlying assumptions of that quote which are roundly false. In fact, we are born primed to prefer those like us and to dislike those very different from us. No amount of well-wishing is going to change that harsh reality. That is why nations around the world are almost uniformly ethnically and religiously homogeneous, because “diverse” societies are generally very unstable. Spin a globe and count the nations on it. That is how many times “multiculturalism” has failed. Moreover, even when we do our best to try to overcome those out-group biases, there is no guarantee that members of other groups will do the same or even want to do the same. Some groups are, after all, far more interested in conquest and self-interest than your universal ideals. Those groups that are hostile toward us will, in the end, often induce us into reverting back to our natural ways and instincts or at least compel us to take protective measures against the threat they pose to our security and our posterity. Thus, “racism” against certain out-groups becomes a protective measure in a world that is, more or less, destined to be tribal. And what seems contrary to your moral thinking may ultimately be necessary for your people’s survival and the survival of the values you cherish.

So, “no one is born hating another person because of the color of his skin or his background or his religion”. That’s true, those things require experience. Like having rockets regularly lobbed into your neighborhood from the Gaza Strip, or watching your federal government deliberately import ethnic aliens into your communities, so as to rub out your backward, traditional culture, like in Tibet or in the US, or watching BLM’ers tell you to your face that you are innately and irredeemably racist simply because you are White, despite having devoted your entire adult life to “social justice”. You know, “experience”, that stuff you’re supposed to learn from, but that the Western power class would prefer you didn’t, that stuff which, the more it accumulates, the less inclined are you to be moved by the vacuous Marxist platitudes of failed leaders, like Barack Obama and Nelson Mandela.