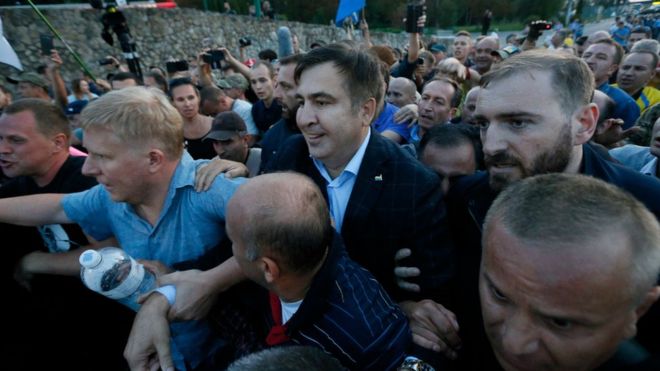 Ukraine Is About To Experience Yet Another Maidan

It is good to be back, fam.

I just got back from Crimea. It’s a really nice place to relax and catch some surf and some sunrays. I felt like the permafrost in my bones that had accumulated over ~3 years in icy, overcast St. Petersburg started to thaw away…

In general, Crimea was a different Russia from the one I am used to seeing in the major metropolises. Yalta and Sevastopol feel like little villages where everyone knows one another, even though they are cities awash with tourists.

And the tourists are mostly aging pensioners with massive bellies and open shirts that don’t try to hide the fact. If you want to really just relax and aren’t looking to chase hot girls, then Crimea is your best bet.

But speaking of fat aging tourists, Michael Saakashvili made a big show of returning to Ukraine last week.

He illegally crossed the border, pushing his way past border guards and then launched a tour of the country. He came into Kiev, hitched his wagon to a protest already underway, and then headed south to start campaigning.

Why bother mentioning this? Well, because it looks like Ukraine is headed straight towards another Maidan.

And who is Saakashvili?

Saakashvili’s story is a crazy one to say the least. He studied at Columbia and at GW in the ’90s. See, there were these programs set up by the United States following the USSR collapse to convert the new cadres of these countries to American value$. Along the way, he met Sandra Roelofs— his wife—who is almost certainly a CIA asset.

He came to power in Georgia as a “reformer” following the Rose Revolution (yet another colored revolution), and using American money started paying the police force of Georgia massive salaries. This eliminated the need for corruption and cemented his reputation as a great Liberal reformer in the West. His drug problem and blatant womanizing was swept under the carpet.

Fast-forward to 2008 and Saakashvili made a fatal error. Thinking either that NATO would back him up, or that Russia would back down, he invaded South Ossetia, attacking Russian peacekeeper forces and triggering a short and catastrophic war with Russia that he quickly lost.

After getting kicked out of Georgia for being a corrupt anti-corruption politician, he eventually made it to Ukraine and another resort town, Odessa (where I hope to spend my next vacation).

There he became governor, after becoming good friends with the Ukrainian President Poroshenko. The Jew quickly found out that the Georgian was taking too much out of the till even by Ukrainian standards, so he clamped down and the relationship soured. Saakashvili went on the offensive and accused Poro of being part of a corrupt clan of Donbass oligarchs ruling the country for their own self-enrichment. For stating the obvious, Saakashvili was stripped of his gifted Ukrainian citizenship and sent packing.

Without any documents, he became a drifter and only the Neocons running Poland would take him in. In general, the Poles seem to always have a soft spot for rabble-rousers immediately East of their borders, don’t they?

And now that Poroshenko is in the United States, begging for money, Saakashvili has a chance to raise some rabble and go to Kiev. He is being helped by Yulia Timoshenko, yet another crafty oligarch Jew from the Donbas.

(She faked being injured when in prison, just like she faked having blond hair and being a goy.)

Timoshenko never lets a good crisis go to waste, and is now throwing her support behind Saakashvili’s bizarre berserk charge at Poroshenko.

Meanwhile, another important Jewish oligarch is the important kingmaker in this situation. Where he throws his support next decides the direction of Saakashvili’s gamble. Saakashvili met with him a day ago, according to some sources. 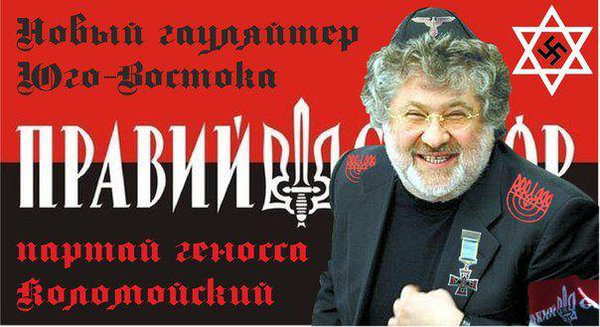 Kholomoisky has a lot of armed nationalist muscle at his disposal and a lot of clout. Following Maidan, he has practically defeated the only other Jewish oligarch that was a match for him, Akhmetov, who pretty much owned Lugansk (still sort of does) in the East.

What does that mean going forward?

Well, if he throws in with Saakashvili, then we have another Maidan. What does another Maidan lead to? Well, believe it or not, Poroshenko is a bit like General Meade in that he doesn’t want to fight the rebels. Why is Saakashvili being let off his leash? Well, perhaps someone wants a new general that is willing to take up the fight in the east. Not Saakashvili, of course, but someone who will fill the vaccum that he creates.

There is also the chance that the nationalists might finally follow through on their threats and take Kiev at last. There are problems with this scenario, though. They have practically no support in the city (SWPL metropolises are the same the world over) and then the Liberal fig-leaf that the current Rada and establishment provides for the Kiev government would be gone and the U.S.+Poland would suddenly be in a position where they are openly supporting Nationalists, some of who are actual SS LARPers.

That’s where Saakashvili comes in. He can act as a sort of safety valve, a controlled opposition figure to rally around, and a Georgian to boot, so that Ukraine can brag about having their very own Stalin finally.

Long story short, it seems like Ukraine is another powder keg ready to blow. And when it does, the fallout will land in the East in a possible escalation of the war there.

Most importantly of all, I believe that Saakashvili sets a dangerous precedent for allowing brown refugees to waltz across Ukraine’s sovereign borders. I hope the authorities (whoever they end up being) quickly realize the need to strengthen the borders and start firing on sight.