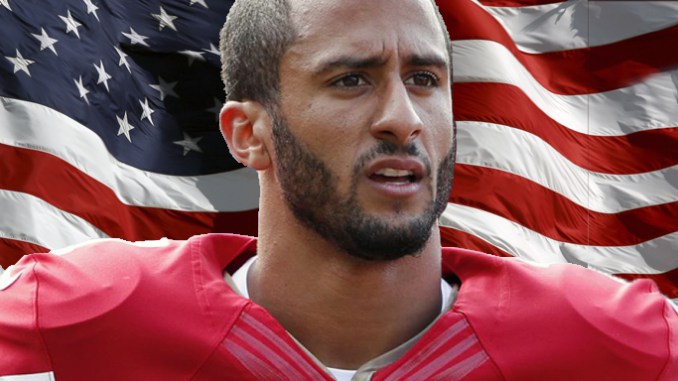 Kaepernick is back in the news. Luckily Hannibal Bateman has already said everything worth saying about the Kaepernick phenomenon.

Much of who we are is decided before we are born.

We spend the rest of our lives filling in the gaps. For some it’s easier than others; you fill the gaps in with family, church, heritage or in our deracinated age, brands. Fitting in is easier for some of us than others, but as long as we stick to the script, keep our heads down and recite “all men are created equal,” we do just fine as good Americans.

For White people, buying into American identity is easy. It’s the default setting; it’s your pre-packaged default. You’re not “White,” but American, and anyone can be an American as long as they recite the pledge of Allegiance, for them the only colors they’ll see are Red, White, and Blue. At least, that’s what so many White Americans are desperate to believe.

White America deludes itself so much that it’s hard to know where to begin untangling the multitude of delusions. It puts its faith in institutions that have long since devoted themselves to their dispossession. Yet they cling on, born ceaselessly into the past, ever more endangered of becoming it. So they while away the hours, identifying with trivia instead of trials. Nowhere is this more evident than White America’s, and especially White American Men’s, devotion to the National Football League (NFL) and other ubiquitous “sportsball” related enthusiasms.

Football, especially in its professional form, has come to be a crux of American identity, and more importantly, White identity. The NFL’s audience is 83 percent White and over 64 percent male, while Blacks make up more than 70 percent of its players. But players and fans alike all stand up before every game to sing the national anthem and take their oaths to America.

The America represented by the NFL is usually nothing more than a sterile shopping mall. Just a quick look at the last Super Bowl is more than enough to confirm this. But to many of its fans, it represents something more: it is an identity. One in which America isn’t divided by black or White, but by Green Bay Packers and Dallas Cowboys, who still come together every week to reaffirm their “American” identity at the beginning of each game. To its White fans, professional football is the outward celebration of the American creed, that all people are created equal and that the American dream as enunciated by “Dr.” King has come to pass.

Many have likened the NFL to the gladiator games of ancient Rome.

In some ways that’s fair, but for White America, their meaning is more than that. The average White American male probably identifies more with his favorite NFL team than he ever has his race, or even his religion or family. The NFL is an outward celebration of the America he’s been told to believe in. He worships the strength of others because he’s been told that his own strength is evil. He cheers for others because he’s been told cheering for his people is “problematic” or “oppressive”. Finally, he worships and adores some ragtag team of convicts and thugs because it’s the only avenue for an identity he has.

We still spend Sundays in Church, only now the church comes in through our screens every Sunday night. And just as in Church, sacrilege and heresy will not be tolerated.

Colin Kaepernick was born to a mother that didn’t want him and a father he would never know.

He was adopted by a nice White Midwestern family from Wisconsin who lost two of their previous children. Kaepernick excelled at sports, achieving notoriety in baseball and American football. I’m sure his adopted parents were at almost every game, beaming with pride at how well their “son” was doing. In addition to his prowess on the field, Kaepernick was a “devoted Christian” who made numerous references to his “faith” and offered a mocha-shaded version of “Tebowing” after a touchdown, to Russell Moore’s delight no doubt.

Kaepernick has probably gone his whole life trying to “fit in” and figure out who he is. Lucky for him, his athletic ability fetches top dollar in today’s America, and being a pro-athlete, especially a Black or mulatto pro-athlete, is about as close to deification as we come in secular America. But I’m sure he never really fit in with his “family” or the doughy Midwestern identity they represent. Of course, it wasn’t the only card he was dealt.

Being a mulatto in America gives you a lot of options. Just ask Barack Obama.

Blackness has come to be the standard of masculinity and coolness in today’s America . Her sons grow up worshipping Black athleticism while her daughters grow up lusting for it. More than that, to be Black in America is to have a grievance, to be a victim. In the Current Year, there is no more powerful moral narrative than that of the victim.

Despite being raised in White America, and achieving relative affluence, Kaepernick chooses to identify with lower class Blacks rather than the effete American elite or his slovenly White fans, who one surmises he despises. Like Barack Obama, or Roger “Too” White II in Tom Wolfe’s A Man In Full, Kaepernick has discovered the power of Blackness to shape narratives in today’s America.

When Kaepernick refused to stand for the pledge of allegiance he wasn’t rejecting America, but attempting to claim it. Already, the usual suspects in the press are going into overdrive to defend him, to wrap his actions up as his right as an “American.” We’re already hearing the comparisons to Muhammad Ali who has gone from a pariah to a patriot in just a few decades.

Sure, White America was shocked by Kaepernick. That’s because his refusal to salute the flag makes him take a pause from his Bud Light-fueled soma-coma long enough to make him feel something. He feels an anger, though it’s misplaced. Conservative media are already crowing about how anti-American this is, or how ungrateful Kaepernick is to Our Great Country^tm.

The truth is, Kaepernick and others like him make these demands because they can. Because they have an identity made up of more than cheap beer and chicken wings. Kaepernick’s fiancée is a member of the Black Lives Matter movement and a vehement Black nationalist. Also, if reports are to be believed, Kaepernick has renounced his feel-good Christianity in favor of Islam.

It’s useful to be in the rising tide of color.

Kaepernick was born as close to a blank slate as any liberal could hope for. He even got the all-American smiling happy family in the Midwest. But for him, it was not enough. The call of blood is stronger than any adopted bond. By embracing his Blackness, he has become more of who he is than he’s probably felt at any other time in his life. That’s why “losing endorsements” or other pecuniary repercussions do not matter to him as long as he has an identity.

White Americans are in many ways orphans themselves. America is one big foster home where they bounce from surrogate family to surrogate family, hoping to find the one that will take them in. The truth is, they either gave it up or were tricked into giving it up generations ago. Today they just grope and yawp for anything that reminds them of what they had, be it star spangled beer commercials or negro athletes decked out as Captain America.

White America is angry about Kaepernick.

But really he’s just ahead of the curve. He’s found his tribe, and it ain’t the San Fransisco 49ers, but something more real, something based on blood.

White Americans are willful orphans to their identity. It’s time for them to come home.