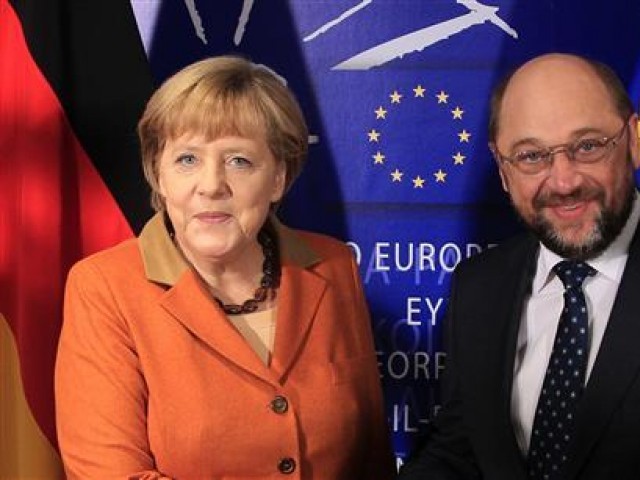 She’s dialing back the crazy until Germans have no other options.

I’ll forego the psychological analysis merely to note that Angela Merkel appears poised to deliver the final blow to the deutschen Volk — after the election.

The sociopathic persecutor of the German people, who also happens to be chancellor, perhaps senses that she needs to dial back the crazy a little bit before the upcoming election against SPD candidate Martin Schulz.

Of course, Schulz doesn’t offer any real alternative for German voters anyway. Regardless, once the pesky democratic process is out of the way, prepare for Merkel to really take the gloves off.

According to Junge Freiheit:

The next immigration wave is already heading for us. Of course only after the election, when the chancellor sits in the saddle again.

German journalist Michael Paulwitz predicts that a sturm of another million Rapefugees is on the way, spurred on by a family unification scheme.

He further makes the rather ironic point that if these migratory waves are driven by war, as is implied by the term “refugee,” one would expect a return “wave” of migrants back to Syria, as the civil war has calmed down over there. Alas, the very notion of a “wave” of Middle Easterners leaving Europe to go back to their own shitty countries is nothing more than a good joke at this point:

So the next million can already pack the bags. If the so far admitted were actually “war refugees”, one should rather expect a return wave: after all, the “Islamic state” is being pushed out in Syria, in many parts of the country there is already peace, the reconstruction could start. But neither in Berlin nor in Brussels is a distinction made between genuine refugees to be granted temporary protection and permanent immigration.

Similar to the stratagems of the tricksters who seem to run our entire government, in Germany the public is manipulated with propaganda claiming that there is a dire need for these rapey-migrants:

To prepare the German public for the next “alternative” immigration wave, the media, business and lobbyists are already working hard to protect their flank. A report from the Federal Government once again prophesies a dramatic “deficit of experts” for the near future, and the Institute of German Economy is posting, as ordered, “more labor-market-oriented immigration”.

I assume if you’re reading us here, you already realize that this notorious “deficit of experts” is a complete fabrication.  Leave aside for a moment the fact that these “refugees” don’t seem to be experts at anything, and that we’re lucky if they can read and write in their own language. What of the situation in regards to European countries importing non-White white-collar workers?  I refer you to Andrew Joyce’s piece on what exactly foreigner doctors are up to once they have done England the favor of ameliorating their labor “deficits.” Trigger warning: it’s triggering.  You definitely don’t want these doctors taking care of your wife or daughter.

But the nature of Germany’s migrant woes is more exclusively in the category of completely useless people from North Africa and the Middle East. They don’t even claim to have any skills.

I know the cynical response that this subject elicits: “The Germans are choosing this, they’re done, this is their fault.” This may be true, but we have to keep plugging away at exposing the problem, and calling it as it is, just like our adversaries are tireless in pumping out their propaganda.