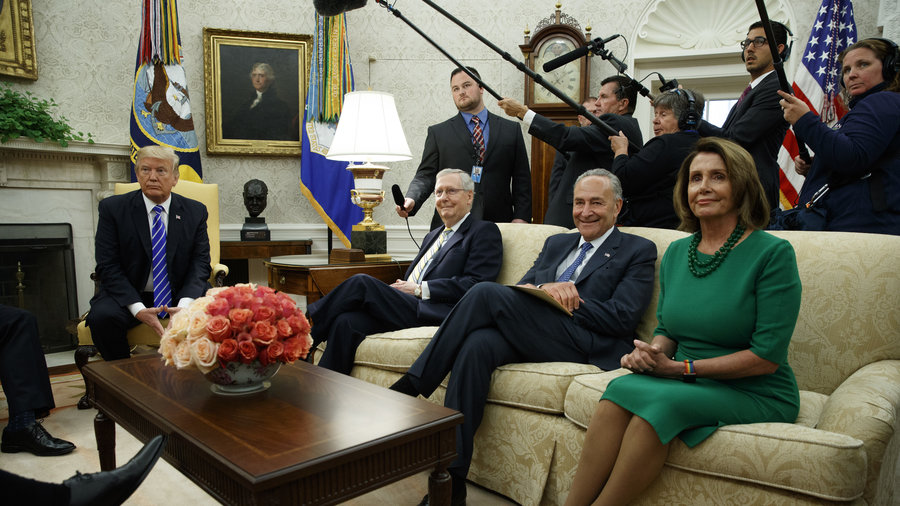 Do you want total Krieg?

Trump has been all over the place with DACA.

On one hand, we on the Alt-Right admire creativity and dislike conventional conservative politics.  For that reason, Trump’s surprise agreement with the Democrat leadership to fund the government and get some disaster relief to the hurricane victims in Houston is an interesting development. It also has the added benefit of annoying House Speaker Paul Ryan.

On the other hand, Trump seems to be falling into the trap of thinking that cooperation and concessions will be met in kind by the Cultural Marxist opposition, especially in regards to DACA.  There, I’m afraid, he is sorely mistaken.  If he did not yet realize that we are in a dire cultural war, perhaps he will soon find out.

Trump is trying to be “reasonable” with regards to DACA. This won’t win him any points with either side.

For all of those (DACA) that are concerned about your status during the 6 month period, you have nothing to worry about – No action!

If we are to give any credit to the left, we will have to admit that they are right in claiming that there is no coherent line of thinking from Trump on DACA.

To state the obvious, however magnanimous Trump shows himself to be, he will be met with nothing but insults and derision from the left.  If you care for a sample, I refer you to the archetypal eternally aggrieved Black man, Charles Blow.  From his op-ed, ominously titled, “Inner Racism Revealed”:

Donald Trump continues to say in every way possible that power and privilege in America is primarily the provenance of people who are white, male, Christian and straight, and that all others should be targeted for denial, oppression or removal.

He has sought to ban Muslims.

He has defamed Black Lives Matter and encouraged the police to physically assault suspects under arrest.

Blow goes on to list Trump’s transgressions against POC in a manner that echoes the complaints against King George III in the Declaration of Independence.  Blow surely has delusions of grandeur, but he isn’t necessarily out of step with the mainstream media.  After all, he’s writing for the flagship of American shitlibery, the New York Times.  And this is the kind of press that Trump gets after he shows himself to be so amenable to helping all those precious dreamers.

The cosmopolitan elites in the media are playing a win/lose, zero-sum game.  When Trump struck a deal with Senator Chuck Schumer and Minority Leader Nany Pelosi on raising the debt limit and providing aid to Houston, one might regard that as an interesting novelty, even a promising development, insofar as it would seem to transcend normal, predictable politics.

Yet the leftist hive-mind smelled blood and took it as a sign of weakness it seems. Moving forward, they are utterly uninterested in any type of “deal” wherein Trump tries to be flexible on DACA and in return gets at least some of the Wall.  Instead, any compromise with the Democrats is going to be interpreted as a “defeat,” and the MSM will gloat accordingly.

Tell that to the 4d chess cult.

Even if we were inclined to meet the left halfway, the favor will not be returned. This isn’t a debate, it’s a war. We’re being backed into a corner by implacable foes.  There is only one question left to contemplate, one asked by a different man in a different, but also eerily similar context…

Do you want total war?