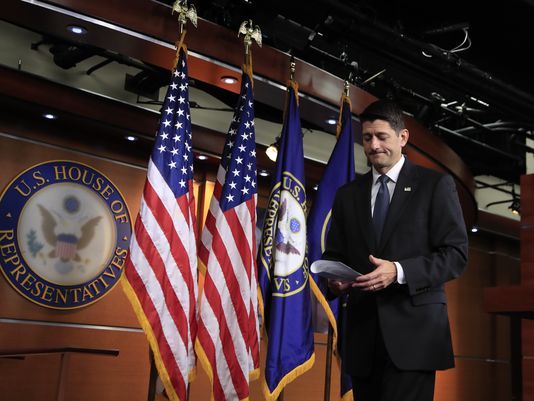 This DACA showdown, which one has the feeling will not end well, has in it all the big questions which bedevil old-fashioned, tired conservatism.  Namely, we have to ask ourselves if “illegal immigration” is a question of legality or a question of culture.  Are we annoyed at people not having their papers in order, or are we trying to preserve the European character of the country?  If the issue is one of mere paperwork, why Paul Ryan has a fix for that.

DACA gives temporary work permits to the children of illegal immigrants brought to the US “through no fault of their own.”  All signs appeared that President Trump would rescind DACA, which he already has denounced, as ten Attorneys General from Republican states threatened to sue.  He’ll let us know on Tuesday what exactly he intends to do.

But leading “true conservatives” such as Paul Ryan, Jeff Flake, and Orrin Hatch are urging Trump not to end DACA.  The shameless flake Jeff Flake tweeted:

To make matters worse, even Trump has contradicted himself on this issue, reverting to utter incoherence.

I actually don’t think he should do that…There needs to be a legislative solution. That’s one that we’re working on. And I think we want to give people peace of mind.

Paul Ryan did not like DACA as it was originally ordered by President Obama.  But this is not because of the actual substance of the program, apparently.  It would seem that Ryan just had a kind of technical, constitutional issue with DACA, which he would gladly iron out by simply legislating the same thing.  You see, then it would be “constitutional” and everything would be okay for autistic “true conservatives” who somehow think if something is “constitutional” it is good in and of itself.  This is truly one of the stupidest solutions to any problem I’ve heard of.

Perhaps the reason that this “solution” the Republicans are cooking up in Congress is so bad is because they have not correctly identified the actual problem.  The problem is not the paperwork, the problem is the demographics.

According to the Washington Post, though, most House Republicans oppose DACA and would be unlikely to sign on to a suicidal, amnesty-like “fix” to the DACA issue.   After all, there were Republicans with enough sense to kill amnesty under George W. Bush, which this debate certainly echoes.

Tucker Carlson shares our bemusement with these “true conservatives” in Congress who just never seem to learn:

Donald Trump ran in 2016 with almost no support from the Republican establishment. In many cases, they actively denounced him. They almost all despised him. But he won anyway because his campaign promises had powerful appeal and Republicans on the Hill were able to benefit by extension.

Rather than take advantage of their good luck and consider whether they ought to try to help the president achieve those campaign promises, Republicans have repeatedly shown their campaign pledges were lies and their chief interest is in protecting the tiny donor class that funds their campaigns.

It’s quite frustrating.  Republicans don’t seem to understand how Trump won the presidency; something near impossible for any Republican to do.  He won because of a nascent desire of Western Civilization to survive.  “True conservatives” such as Paul Ryan see that as problematic.  Such true con’s see Trump as naïve in wanting to build a border wall or end DACA.  What makes them have such arrogance, though, to condescend to Trump?  What exactly is their mandate?  Last time I checked, it was Trump who actually represents the agenda of the American people.

These amnesty mongers can’t win but for losing.  Trump had it right the first time:

Disloyal R's are far more difficult than Crooked Hillary. They come at you from all sides. They don’t know how to win – I will teach them!

Unfortunately, they did not pay attention to that lesson.  They are uneducable.