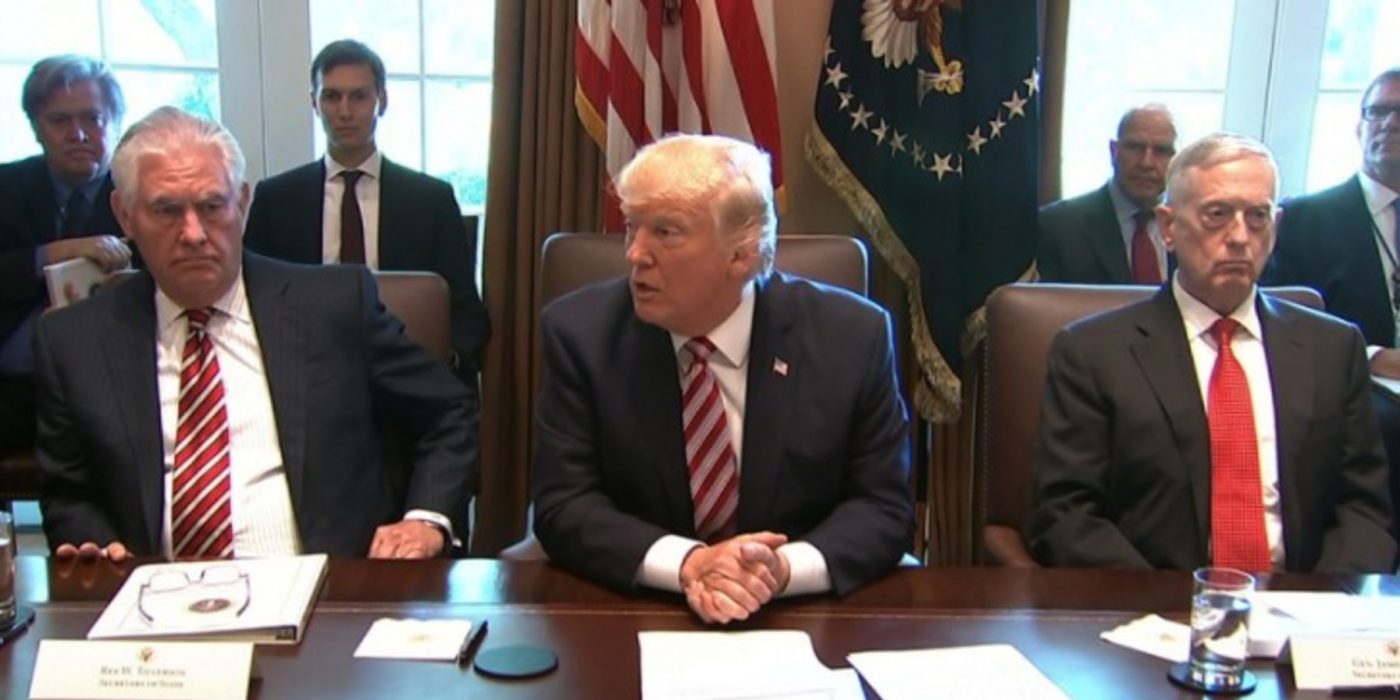 Did Trump hire anyone who actually agrees with him?

We’ve got a lot of quislings in the Trump administration.  Rex Tillerson is a lugubrious, drawling, low-energy mess.  What good is hiring an unqualified Texas oilman if he’s also politically correct?  As for Gary Cohn, we need not even mention that he is a subversive element in the Trump administration.  And finally, General Mattis, who is supposed to be so tough, such a bad ass, “Mad dog” Mattis can’t seem to wrap his mind around “no trannies in the military.”  While I’m willing to entertain the prospect that Trump could not find kindred spirits in a country of over 300 million with which to people his administration, I still find this state of affairs perplexing.

The most recent attack of ‘counter-signal Trump syndrome’ comes from Secretary of Defense Mattis, who instead of simply implementing Trump’s ban on transgendered people in the military, is convening a panel of “experts” with a vague mission to advise on the best way to implement Trump’s directive.  Meanwhile, the ban will be on hold.

Perhaps this is the regular process and all is well, but the idea of “studying” the issue seems rather a step back from Trump’s definitive order.  Meanwhile, the MSM is gleefully reporting that Trump’s order is “frozen.”  At least by his own words, Mattis does not appear to be in open rebellion:

Once the panel reports its recommendations and following  my consultation with the secretary of Homeland Security, I will provide my advice to the president concerning implementation of his policy direction.

“Expert” opinion is a pernicious thing.  This is because “experts” are steeped in Cultural Marxist sophistry, and the transgender ban is a direct affront to this regime. I would venture to say that you can’t find “experts” in any field who will advocate the types of ideas that Trump ran on, no matter how common sense these ideas may be.

Mattis and General H.R. McMaster are completely antithetical to what we were told a Trump administration would represent.  According to an anonymous senior administration official:

We’re fighting everyone’s battles for them. I think Mattis and McMaster will push the president to be more globalist in his thinking. But that’s not the vision he was elected on.

It would seem that your average conservative really likes Mattis though.  After all, he’s got a cool nickname, “Mad Dog.”  This just shows how vacuous the conservative movement really is.  There is little critical analysis; but instead, mere symbols and gestures are enough to show that one is on the “conservative team.”

Mad Dog wants to blow stuff up—he’s not messin’ around!

What fools such conservative cheerleaders really are!

As for Rex Tillerson, he cucked very hard indeed on our President vis-à-vis Charlottesville, setting himself up as a foil to Trump for the lying media to exploit.  When asked on Fox News Sunday by the rabidly anti-Trump Chris Wallace whether Tillerson supported the President’s characterization of Charlottesville—that there was blame “on both sides”—Tillerson demurred, saying instead that the President “speaks for himself.”

My God, what a pussy!  You’re Secretary of State, and you’re still afraid of people calling you racist?  I thought this guy was a Texan.  Instead, he’s just another example of how useless these “true conservatives” really are when things get a little uncomfortable.

The common thread between these men is an utter lack of imagination.  If you have no imagination or creativity, you are simply a receptacle for the conventional wisdom received in the wider culture and institutions.  This is not good enough.  In the Alt-Right, we have a lot of imagination.  We demand the same visionary zeal in our government.  And until we get that, we will be here exposing their perfidy against the very ideals which Trump himself purported to represent.