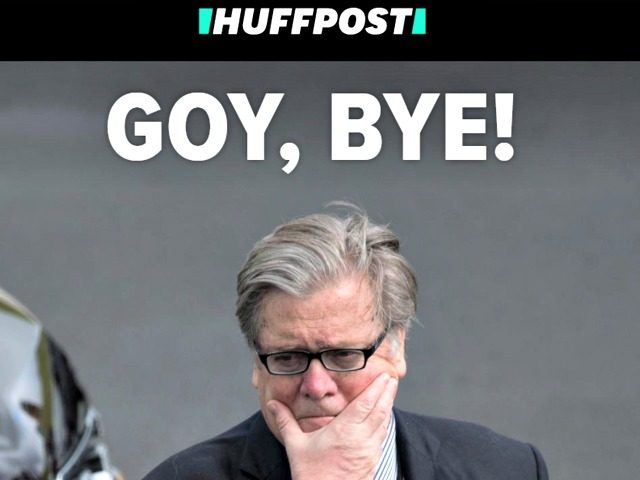 Goys Out, Heebs In, And Antifa In The Streets

What a week its been.

At this point, everyone has heard the news. Steve Bannon is out and the Libshit Neocon Junta is in.

The Jews over at Huffington Post were very happy about this development.

The Ashkepaths thought that they could get away with this brazen display of chutzpah. And frankly, they could have. The basic bitch conservatives at Breitbart immediately picked up on the story, only to point out that this proved that Liberals were the real racists and that Liberals were trying to ignite anti-Semitism and that only the Right remains a bastion of pro-Semitism.

I mean read what Breitbart wrote and try to see what mental pretzels they twisted themselves into to somehow avoid stating the obvious:

“Goy” is a Yiddish word meaning “nation,” commonly used to refer to gentiles. It is not, on its own, necessarily a term of derision, but can be a derogatory way of referring to non-Jews. The context here, gleefully celebrating the departure of a Christian White House staffer, is hardly a term of endearment. There is a suggestion that Bannon’s departure is a part of an ethnic and sectarian victory over white gentiles, rather than a reshuffling of White House staff. Alternately, the headline evokes anti-Semitic themes of Jewish control.

Yes, so when a Jew brags about kicking out a Gentile and plasters it on Huffington post, we should be wary of said Jew for trying to stir up anti-Semitism. This isn’t a Jew bragging about victory over the Gentiles, no, this is a Jew trying to foment anti-Semitism…which is itself anti-Semitic, so really this Jew is the real anti-Semite because he is encouraging evil White Nationalist talking points about the Jews. Therefore, that Jew must actually be a White Nationalist.

That’s literally what Breitbart came up with. They’ve clearly never heard of Occam’s Razor. And they didn’t kvetch as much about the next headline: 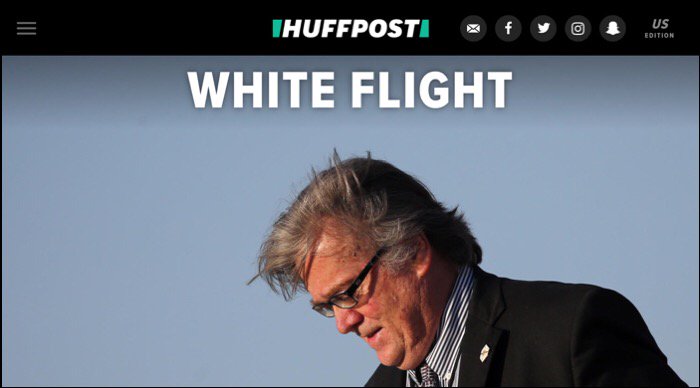 Because a team of Jews putting up a headline gloating about Whites being kicked out of power is nothing to worry about. If you worry about it, you must be a Nazi White Nationalist…if confused, see above paragraph for explanation.

The basic bitch normie Right cannot come to terms with blatant displays of Jewish ashkepathy and chutzpah, so they just blame Liberal outlets (themselves run by Jews) for showing the public the contempt that Jews have for Gentiles in private. They don’t condemn the anti-Gentile statements, they instead condemn the outlet for indicting Jews and proving White Nationalists to be right.

Shhh! You’re laying it on too thick! The goyim will wake up if you keep this up! Oy gevalt you guys are gonna get us pogrom’d with all that chutzpah, you must be crazy. You are the real anti-semites because you keep prodding the sleeping Gentile!

As for Bannon being kicked out, well it’s not good news for us. Nor is the news that he supposedly parted on amicable terms with Trump to be trusted. It is almost certain that they clashed often, and decided to save face in the public eye by parting on ‘friendly terms’. It’s not unusual, few people flame out at their boss after getting fired, especially if they want polite society to accept them afterward and get that letter of recommendation.

From what we know, he clashed quite a bit with Trump and the Neocon cabinet that Trump picked. Bannon was always the odd man out. And J-Vanka had a bone to pick with him.

Bannon called out Kushner for being a liberal, a globalist and a power-hungry snake, ie a Jew.

And Ivanka, who is by all accounts a vapid, progressive and socially conditioned millennial liked to make Bannon’s life difficult as well by whispering in daddy’s ear whatever Kushner or her retarded modern woman instincts told her to.

The generals that Trump is so fond of also didn’t like Bannon and clashed with him constantly. They are in control now.

What comes next is a brave new Trump presidency.

It’s not all bad news though, the situation on the street is quickly out-pacing any developments in the White House or Washington. There are now mobs of unhinged leftist lunatics running around smashing statues, protesting low-caste Indians and cucks who don’t virtue-signal as hard as they do. This was from Boston the other day. These are the “Nazis” that Antifa showed up to protest.

Good on them. I would want to shut down this gathering of cucks as well.

The situation continues to escalate and the milquetoast moderates are being pressed out by the violent left. This a good development for us. Once Antifa radicalizes that soft middle, people will be left with a choice. The Alt-Right or Antifa. Order or chaos. Civilization or anarchy. White society or a mutt nation.

And we have Charlottesville to thank for galvanizing the Left into this crazy overreaction. They will regret waking sleeping White America from her slumber.