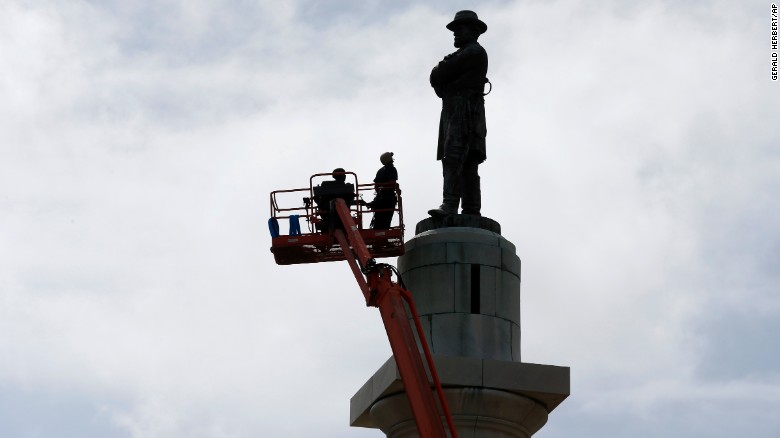 Confederate Monuments Stand For White Heritage And Pride, Not States’ Rights Or History

When liberals explain why we need to take these statues down, simply agree and amplify.

When it comes to the debate over removing Confederate monuments, those in favor of keeping the statues have not necessarily done the best job making their case.  The argument propounded by boomer conservatives is that these monuments are a part of history, from which we can learn.  They carefully avoid the question of what exactly we’re supposed to learn.  If you stick around too long, they might start talking your ear off about how the Civil War wasn’t really about slavery. But ultimately what their argument boils down to is an earnest plea that, “It’s not racist!”

As a caveat, much of mainstream conservative opinion has shifted so that many actually agree with liberals that the monuments should be removed, lest these “respectable” conservatives should be labeled racist.  National Review Editor Rich Lowry is of this mind:

The monuments should go. Some of them simply should be trashed; others transmitted to museums, battlefields, and cemeteries. The heroism and losses of Confederate soldiers should be commemorated, but not in everyday public spaces where the monuments are flashpoints in poisonous racial contention, with white nationalists often mustering in their defense.

But for those of us in favor of keeping the statues, the best argument hasn’t even been made yet.  It begins by acknowledging—and in part agreeing with—the liberals’ argument.  On the airwaves of NPR, or on the pages of the New York Times, you’ll hear leftist intellectuals explaining patiently in supercilious tones that these monuments are not about heritage at all; but rather, when you look at the context in which they were built, are meant as an act of defiance.  They represent Southerners’ defiance against the North, defiance against Reconstruction; and most of all, defiance against the Civil Rights agenda and all that entails.  These arguments are bolstered if you simply look at when the monuments were built.  From the Atlantic:

But they are actually post-bellum propaganda. Segregation did not become Southern dogma well after the compromise of 1876. It was not firmly locked in place until Woodrow Wilson’s ascent to the White House in 1912. In other words, segregation was constructed in precisely the period in which the monuments were put in place.  They did not symbolize past battles, but present and future white supremacy.

We should perhaps accept the left’s premise, without of course buying into their ridiculous “white supremacy” lingo, nor do we share their conclusion that the statues must come down, obviously.  Their premise is that the monuments are more than just an homage to the men and the “lost cause” that they represent on a literal level.  They are also an affirmation of Southern values and attitudes towards race in the pre-Civil Rights era.

To put it in colloquial terms, these statues are the Old South’s way of saying, “Okay, you won, but you know what? F- you.”  I like to think we share that attitude on our side in the current conflict over the statues.  It’s a similar situation with regards to the Confederate flag.  Yes, there is an element of honoring our ancestors; but let’s be real, this flag has taken on new meaning in the post-bellum era, and it’s taken on an even more pregnant meaning in 2017.

Instead of tying ourselves into knots explaining that these symbols and monuments “aren’t racist,” and that it’s “heritage not hate,” we should at least inwardly recognize that these symbols are in fact representative of an iteration of White identity.  And to be even more specific, they represent that identity as it is being besieged by liberal dogma on race and “social justice.”  Earlier the Southern resistance was against desegregation, as adjudicated in Brown v. Board.  With that so far in the rear view mirror, how much more desperate are our battles today?

While earlier that defiance may have had a different context, in 2017 our struggle is against the tyranny of Cultural Marxism.  And incidentally, most Americans agree with us.