The AFD’s Awesome Placard Campaign Is Winning The Propaganda War

This is WahlKampf done Right! The Alt-Right should take notes.

The Alternative Für Deutschland party has been dropping some red pills via their election campaign placards posted across the country.  This is Alt-Right tier propaganda.  Frankly, it’s better!

Above from the left, translated from German, the first caption reads: “Colorful diversity? We already have that.”  Second from left: “Burkas? We stand for bikinis” (killing two birds with one stone by offending feminists).  Next: “We like the traditional,” with an image of a  happy family enjoying the beach.  And finally on the right, the placard advocates “direct democracy like in Switzerland.”  Referendums are considered “dangerous” by the German elite, as that would allow the actual citizens to have a say in the affairs of their own country.  Such populism, why you know what that can lead to… 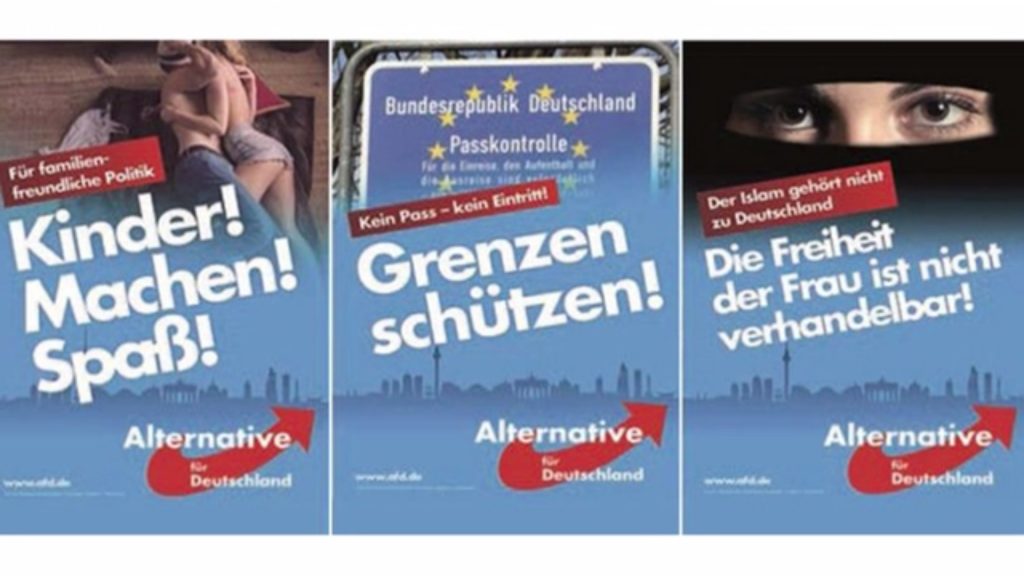 And there’s more.  Above from left: “Making kids is fun!” (this is true). Center: “Protect the border!” And on the right, below the image of a woman peering out of a burka, the caption reads: “The freedom of our women is not negotiable!”

Compare this to our political scene.  The Republican party’s ethos seems to be, “Don’t offend anyone, but say things in a slightly different formulation than the Democrats.”  Over in Germany, the AFD’s ethos is now officially, “zero f*cks given.”  Unfortunately, they’re not an especially successful political party; which perhaps gives them liberty to let loose.  When you’re already banished from polite-society, it tends to have that kind of liberating effect. Reminds you of the Alt-Right a bit, no?  We both have a small but loyal and enthusiastic following.  Only our demographic is growing.

It could well be that the AFD is more savvy on nationalist questions than they let on.  According to Mike Enoch, party members were not averse to listening to a little Daily Shoah now and then.  With such interesting tastes in entertainment, who knows what these gentlemen would be up to if they were really let off the leash?  At any rate, this is some of the best propaganda out of Germany since World War II.

Similar to the US, the AFD has to worry about various shitty leftists vandalizing their signage; as we experience with our Trump signs, to say nothing of our more risqué posters.  (Imagine, we couldn’t even safely display a sign for our President in our own country!)  The AFD’s motto in hanging the signs, according to Die Welt, is, “The higher, the safer.”  Up to 40 to 50 percent are torn down. “That’s why they have to be hanged up again and again.”

The Germans note the irony of Antifa and other leftwing extremist groups who are in fact the ones using anti-democratic tactics; i.e., shutting down free speech.  Indeed, the “shut it down” tactics the AFD has experienced are similar to what the Alt-Right has experienced, or even what more moderate conservative factions in the US have experienced.  One cannot say that it is worse in Germany or America, as the street-level violence of the left is equally outrageous in both countries.

It would seem that right wing messages prevail with a given nation’s native population when allowed to compete in the free-marketplace of ideas.  Perhaps Germany is an exception, with their heretofore disappointing voting patterns.  But again, that is all the more reason for the AFD to throw caution to the wind, and just go all out, as they are now doing apparently.

Steve Bannon, are you paying attention?  Take notes.  As for Germans, while they by no means are broadly in favor of the AFD, one senses that they cannot but help to admire the courage, and the nerve of the campaign that the AFD has launched.