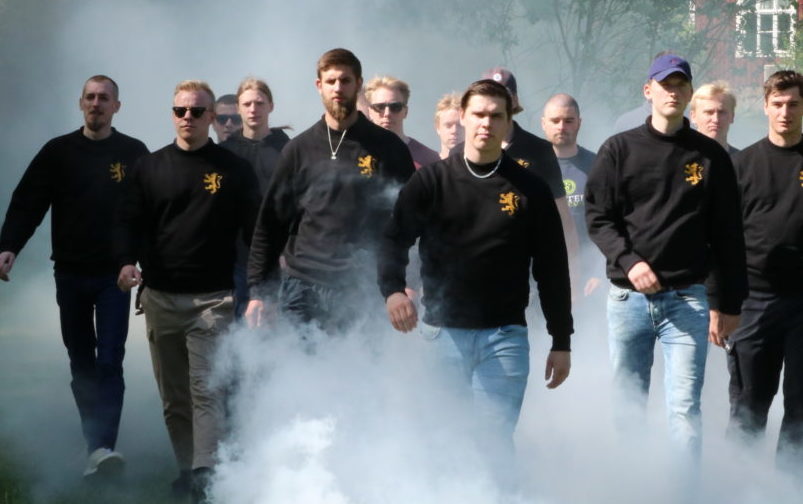 Get hyped for 'Unite the Right' on the 12th by checking out what our comrades in Occupied Sweden are up to. This will inspire you!

Nordic Youth had a successful counter-demonstration against Sweden’s Pride March.

For those of you that don’t know, Sweden is ruled by an unholy homo/cat-lady/SWPL mafia. Nordic Youth likes to remind them that there are still Swedes who resist.

Nordic Youth divided into 4 separate groups and decided to not wear any nationalist clothing. Cops were on the lookout and prepared to intervene seeing as Nordic Youth has done something against Pride for 3+ years straight.

Everyone was casually dressed and did their best to blend in. They then went to the staging ground and stormed it simultaneously all at once. They originally had two banners with “Save the Children” and “Stop the Pedophiles” but the group with the latter banner was detained prematurely by the police who caught wind of the operation and just had to go and ruin the fun. 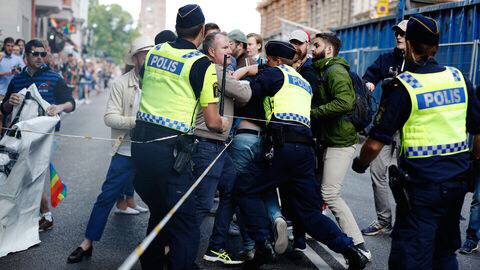 The mission was to hold up the parade for as long as possible until the police physically removed them. The result was a monumental success. Nordic Youth managed to stop a parade with 50 thousand participants and probably half a million onlookers dead in its tracks for ten minutes.

They chanted “Protect the children from the pervert’s festival!” and other such shitlordy chants. 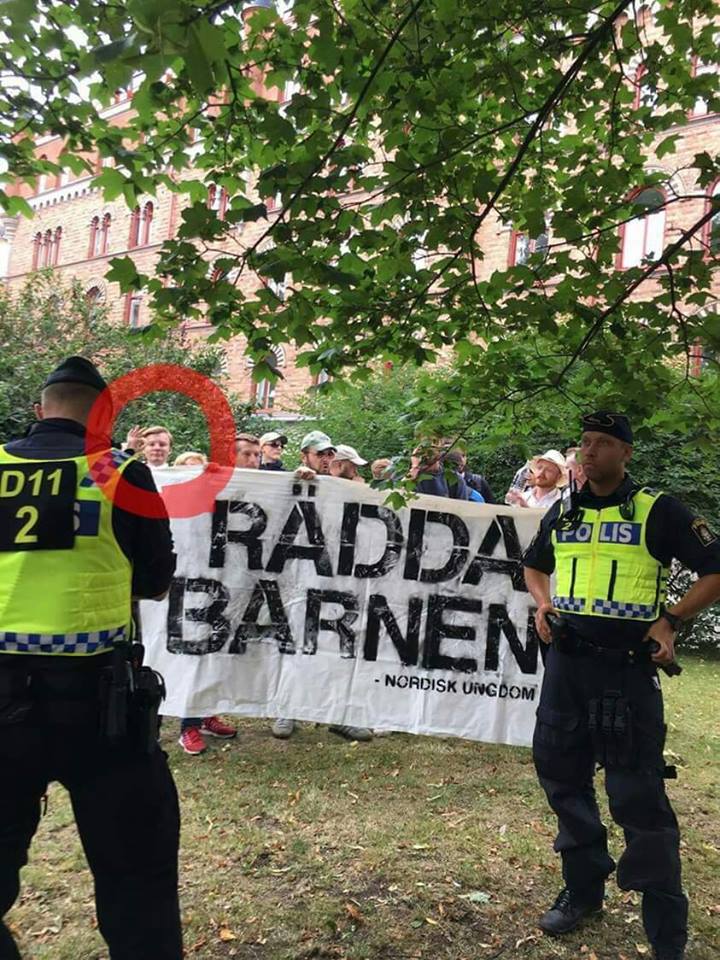 Everyone had an assigned role, some guarded the flanks, others the rear, still others filmed the whole action. Despite what the Lefties were kvetching on Facebook, this wasn’t a particularly well-planned or well-rehearsed action. The Left thinks that these guys are Spetsnaz or something like that when really they just kept their cool under pressure and worked like a team. Don’t tell them that though. It is good that they fear us. We become larger than life in their minds and they become paralyzed with fear. Remember:

This is what Whites can do spontaneously, no planning necessary. Let that sink in.

Two Antifa guys ran in only to get promptly BTFO’d by Nordic Youth. The first attacker got grabbed by his collar by one Nordic Youth and then pummeled by a second Nordic Youth who availed himself of the soft stationary target that was so graciously presented to him. The other Antifa wisely ran for it. 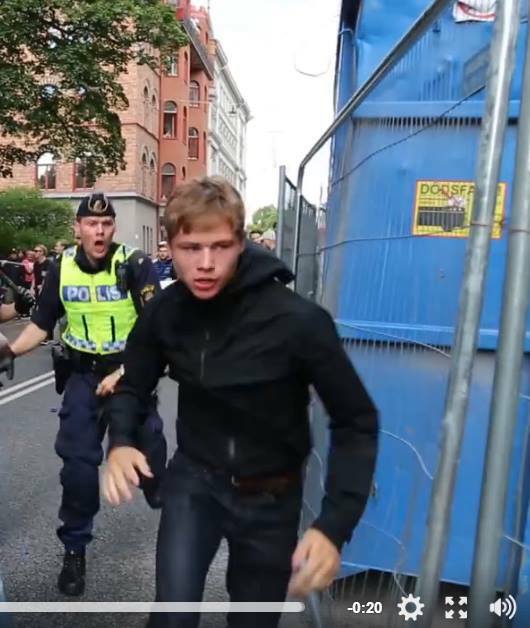 One female who was with the Nordic Youth got attacked by a balding numale Swedecuck who presumably was also a homosexual. This prompted a charge by the Nordic Youth into the crowd to rescue her. The leader of the group, Fredrik Hagberg got taken down by the coppers and was thrown face down onto the asphalt. He was milliseconds away from getting arrested when the adrenaline spike kicked in. He pushed himself up to his feet with some Swedish manlet cop on his back as well and retreated into the protective formation of his comrades, shedding the cop off his back as he did so.

Hagberg managed to avoid arrest because he managed to get back to his group. The moral of the story for activists everywhere is this: don’t go out alone, move in groups, stick together. 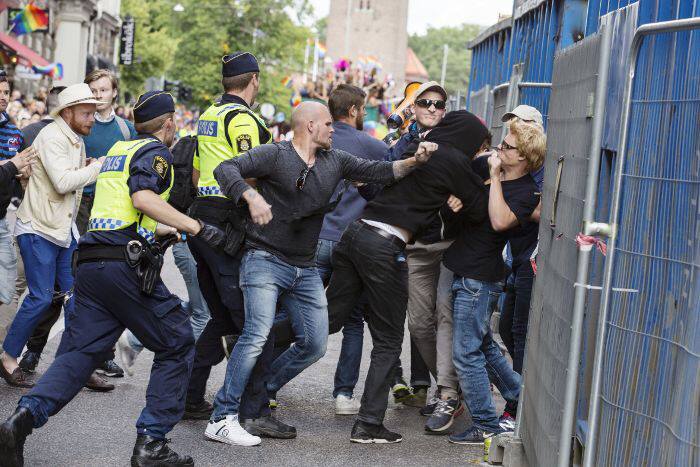 Several useless female cops tried to overpower the group with their grrrrlpower, but it was only when the male cops started pushing that Nordic Youth was forced off the march route. (It occurs to me that we should encourage more and more female participation in the police force everywhere in the West, as it will only make our jobs easier. Go feminism!) The group locked elbows and managed to avoid arrest and attack by Antifa by sticking together as they beat a hasty retreat.

After the successful first action, the group casually made its way over to a new location, with the police in tow. All of a sudden they broke out of their walk and sprinted over to the parade again to stop it in its tracks. This time, they got caught out by the cops, who were out in force with helicopters, squad cars, and mounted patrols. (If only they could muster such resolve for dealing with Muzzies!)

The group was finally arrested, tagged, and driven out of the city. 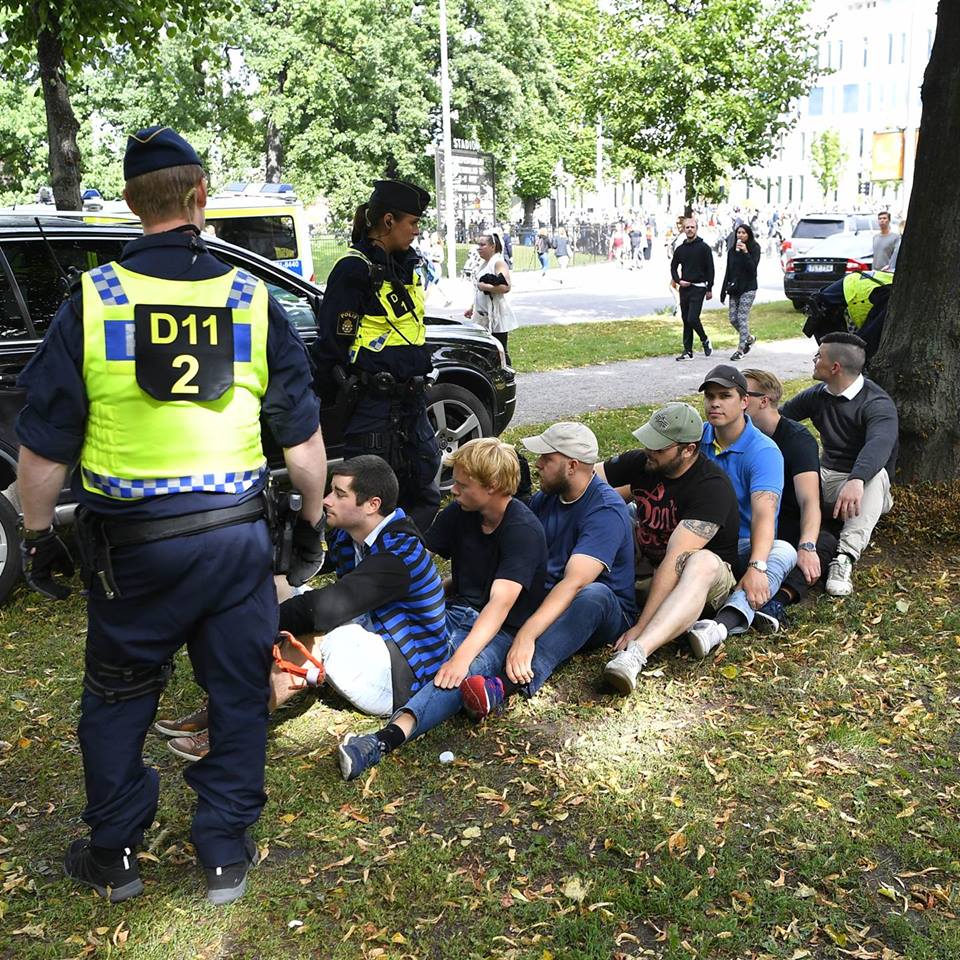 A group of 20 some activists was able to stop an entire parade of fags and freaks. This was a modern day Thermopylae moment if ever there was one.

The freaks could have rushed Nordic Youth and trampled them through sheer force of numbers. But they didn’t. They were scared stiff by the resistance they encountered. If this incident demonstrated anything, it is how fragile the freak mafia is. All it takes is just a handful of good men willing to put their foot down and say “not one step further” to stop the whole damn circus in its tracks.

If you needed any more proof, here it is. A small, but dedicated corps of activists can move mountains… And we’ll have a lot more activists at Charlottesville on the 12th. Join us and join in the fun.