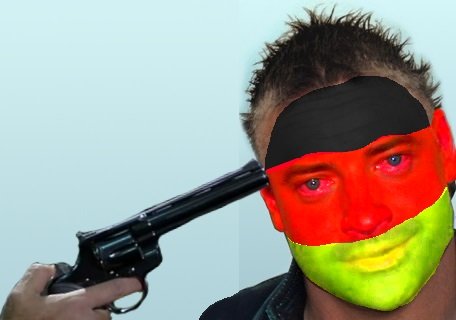 Another Day, Another Terror Attack In Germany

Let's take a step back and try to understand what is happening in Germany.

Are you tired of hearing this kind of news? I know I am. There was another spontaneous workplace violence incident in Hamburg involving knives and a certain religion of peace.

Yep, it was a refugee.

A man armed with a kitchen knife fatally stabbed one person at a supermarket Friday in the northern German city of Hamburg and six others were injured as he fled, police said. He was overpowered and arrested.

What else is there to say except that Diversity kills?

Well, we can take a step back and look at the bigger picture here.

I still haven’t decided which narrative I believe is the most accurate in the case of Germany. Here are the explanations that I have come up with so far:

Explanation 1: The Germans could have simply been naive enough to think that allowing millions of third world savages into their country might be a bad idea. Yeah, you could make that case, I suppose. Perhaps Germany has indeed truly become a nation of Golden Retrievers, unable to distinguish between friend and foe. Basically, their shits all retarded and we can’t be too mad at them for being dribbling retards, like that one kid in school who was mentally challenged, and who everyone made fun of, but who thought that meant he was, in fact, popular.

This is the pathological altruism explanation, I suppose. They just can’t help but be nice to brown people, it’s in their genes. They can only be warlike to other Whites.

Explanation 2: Germans are actually not as naive as all that. But they noticed how all the other countries in Europe were quickly diversifying and didn’t want to be considered uncool, so they decided to close the Diversity gap. A little bit of rape was a small price to pay for the ability to posture and preen.

This is the Virtue-Signaling explanation. They needed to feel good about themselves and buff up their PC credentials, civilization be damned.

Explanation 3: The Americans/Jews forced them to take the refugees. Germany was dominating Europe economically and politically, so the American Deep State decided to direct some displaced refugees from all the destabilization campaigns in the ME Germany’s way. This was done to undermine Germany, to keep her down and out, busy with internal problems. These “people” did not just suddenly show up in Europe. They had to be ferried, fed and helped all along the route. Lots of money, coordination, and effort went into this plan. A lot of help was provided by Israeli NGOs and the Israeli government as well as Jewish philanthropists like George Soros.

I think that you have to apply the different explanations across different groups to understand what was happening.

Delusional cat-ladies and naive college students fit neatly into Explanation 1. Useful idiots that have been successfully demoralized and are now used as pawns to advance the Globalist agenda.

Social-climbers of the upper-middle class variety fit neatly into Explanation 2. Useful half-wits that can be counted on to scramble up over the backs of their racial kin for extra treats and the thrill of keeping up with the Jones’.

And then finally, you have the Elites of German society. Now, here I find it hard to believe that they could look at open borders with the Third World as a net positive. Really. I just struggle to think that they could possibly be that dumb, just from an arithmetic, cost/benefits analysis. They don’t have to be patriots of Germany to pause and reconsider the merit of letting millions of angry young men from war zones into their country.

Even from a simple Yes/No risk-aversion standpoint. Why not just take the safer route and say “No, so sorry”?

If you consider that Germany is basically an occupied country, things become clearer.

Suggesting that someone is “simply naive” for not foreseeing that bringing in millions and millions of 3rd world savage vagabonds might have bad consequences an understatement. It leads to many questions about mental health. Suggesting that they may have had no choice seems to be more reasonable, at least in my mind.

Regardless, these are the types of actions that literally lead to death and war. They are literally treasonous to the German people and to the European continent as a whole. The sand-people may be the ones doing the killing, but they’re not the only ones with blood on their hands.