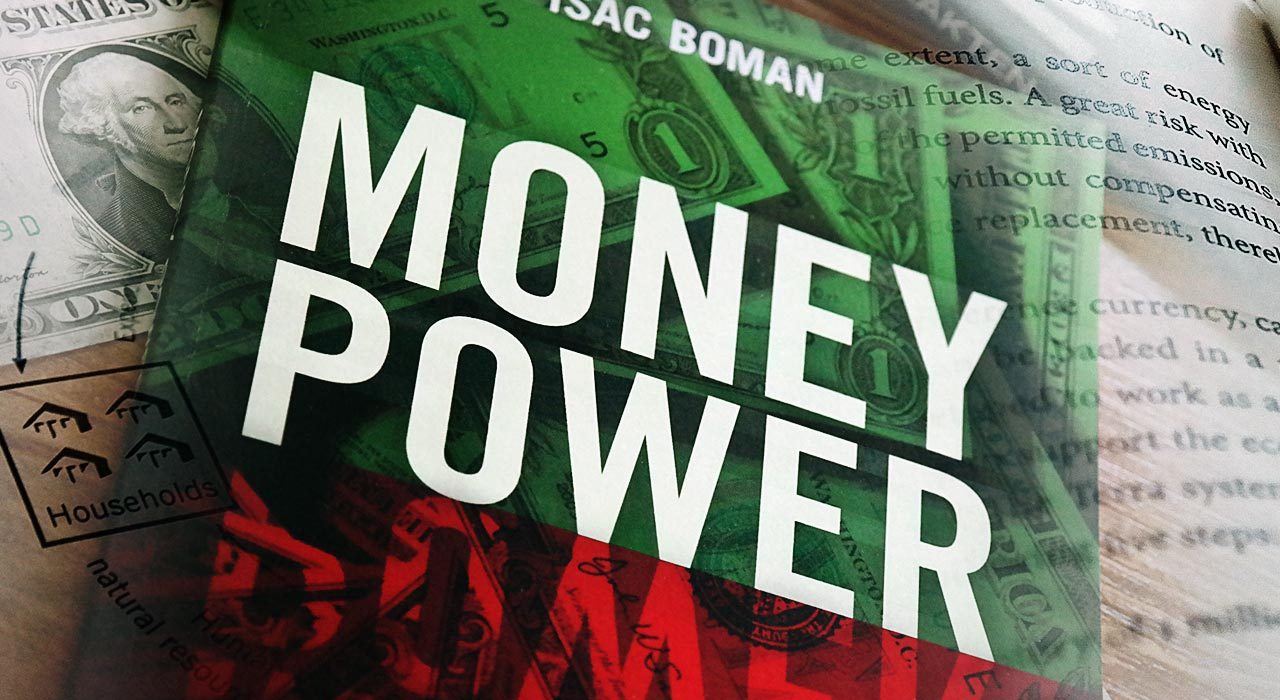 “Money Power: A Force For Freedom Or Slavery?”

Isac Boman's "Money Power" provides an intriguing read and is accessible to anybody with an interest in banking and finance whether they be experts or complete beginners.

First off, allow me to extend my apologies to you all for the delay in producing this review (I aim for one a month). I had been busy helping out with the French presidential election, translating an article by Guillaume Faye on the very same election, subsequently helping out with the French legislative elections and then moderating on the AltRight.com discord server (which I encourage you all to join).

All in all, I’ve been active but elsewhere. However, now that things have calmed down somewhat, I have been able to review Isac Boman’s Money Power.

I shall start by saying that many times have I heard those within the AR movement (but not exclusively them) lament over the power the banking sector has over government and society. By extension, this influence belongs, in many cases, to (((those in charge))). However, rarely is it that those decrying the current system are able to cobble together a cogent argument as to why they do so (a case in point would be the economic crash of 2008 – which, incidentally, began far earlier than said year – whereby many were angry at the bankers but few really knew why they should be due to a lack of understanding of how the system functions). Indeed, Isac Boman reiterates the opinion of renowned economists that the matter of banks (and the way in which they operate) is barely touched on in the study of economics.

This month’s book, in attempting to elucidate upon the above, targets a broad potential audience ranging from the aforementioned individuals (those who possess a healthy weariness, to put it mildly, of banks and the monetary system but remain ill-versed in the underlying mechanisms), to those who have an understanding of how banks fulfil their roles but who would, nonetheless, appreciate a novel yet incisive interpretation and perhaps enjoy cogitating over alternatives thereof.

Money Power: A Force for Freedom or Slavery? aims to answer that very question as to whether the current monetary system in the West (read “systems” plural due to the subtle differences between them that Boman highlights) is conducive to our freedom of choice, or whether it facilitates a form of modern slavery that benefits a rich and powerful minority. The foreword to Money Power (a glowing review that serves to clarify how Money Power elucidates on a world presented as self-evident) states that the book’s main purpose is to expose the blind spot inhabited by those that steer the money market.

Boman’s book is 79 pages long (when excluding his list of sources, the foreword, and the prologue) and is broken down into three main sections (which are further divided by area of focus).

The first is entitled What Is Money? and lays down the foundations for the rest of the book namely by attempting to explain what money actually is. This is done by, firstly, presenting Adam Smith‘s definition of money from his Magnum Opus The Wealth of Nations. In doing so, Boman frames money as a means of measuring, exchanging and storing economic value (with “economic value” to be interpreted as “value in use” and “value in exchange”). Boman then proceeds to add to our understanding of money by submitting to us Frederick Soddy‘s interpretation of money as a representation of a debt owed to the person holding the note; money represents something waiting to be bought.

In combining these two established, universally recognised perceptions, Boman builds himself a springboard from which he is able to dive into more interesting and perhaps unusual interpretations of how money works from a diverse array of sources (an example of one of his more arcane selections being the comparison of money to energy from the conspiratorial Silent Weapons for Quiet Wars).

Finally, the What Is Money? portion of the book sets the reader up for the second part by encouraging him/her to think critically and invest in the subject matter advanced by Money Power by hinting at certain topics all whilst holding back from spoon-feeding ideas and lines of inquiry. For instance, Boman looks at Igor Solonko’s idea of money as a conceptual power; an alternative to using political command power to achieve a goal is to use the market. Therefore if money is power, then financial institutions are to be viewed as powerful. One could then ponder as to whom this power belongs. Indeed, who owns the banks? (((Who))) indeed…

Section two of Money Power is called The Modern Monetary System and begins by asking the question “how is money created?” (the answer seemingly remains an item upon which economic experts, as per usual, are unable to agree).

I found that the above was very well outlined in Money Power however, I did feel that a more in-depth explanation of “fractional reserve banking” could have been beneficial to the uninitiated. This is a minor criticism and the analysis provided by Boman is clear, succinct and enables the reader to conduct their own research on any of the points he broaches.

The second section also critically evaluates the interest phenomenon. Money Power seems to reach the conclusion that interest, at its current levels, is ultimately usury. This is a common sentiment held amongst those on the right (that is to say the social right). However, Money Power does not try to put this across as fact rather, the pros and cons of interest are discussed with the former including the encouragement of quicker repayment and the incentivising of lenders to actually lend in the first place. In the end, though, it does seem that the cons somewhat outweigh these benefits as one considers that high-interest rates prey on the vulnerable and transfer wealth from the lesser well off to the almost infinitely more wealthy.

By the end of the section, the reader is led to face the reality that loans ultimately put power in the hands of lenders. This can even be seen on a global scale where lenders have authority over nation states such as Greece!

The Money Power section sums up its message by citing a quote from John Perkins, a so called “economic hit man”:

…we use many different techniques, but probably the most typical is that we’ll identify a company [country] that has resources that corporations covet, like oil. We’ll arrange a huge loan from an organisation like the World Bank for that country; but the money won’t go to that country at all. It goes to big U.S. corporations — Bechtel, Haliburton, ones we hear about all the time – to build infrastructure projects in that country.

These projects, like industrial parks and power plants, benefit the very rich of those countries and do nothing for the poor, except to leave the country in huge debt, one it can’t possibly repay, which means it can’t give social services, education, health to its poor, and it’s put in a position where it doesn’t repay its debts; so, at some point, we economic hitmen go back in and we say: ‘Look, you can’t repay your debts, so give us a pound of flesh. Sell oil to our oil companies real cheap or vote with us at the next U.N. vote, or send troops in support of some of ours some place in the world’. And that’s how we’ve created this empire; and we’ve done it without most Americans even realizing that it’s happening’.

Lastly, Money Power‘s third and final section is named Alternative Money Systems and does exactly what it says on the tin; introduces and expounds several alternative monetary systems and financial concepts. These include the “Terra currency”, alternatives to interest (such as demurrage fees) and “full reserve banking”. Exploring these may stimulate some thought amongst readers and will serve to challenge the perceptions that many of us hold about money. To those with expertise in finance and banking, some ideas may prove exhilarating, bizarre, impractical, quaint but never without interest!

All in all, Boman’s Money Power provides an intriguing read and is accessible to anybody with an interest in banking and finance whether they be experts or complete beginners.

As alluded to above, I would have liked to have seen some areas further explained especially given the book is under 100 pages long. Fundamentally, I found that the book serves to make readers question the financial world around them and, by broaching a wide range of subjects, prompts them to investigate further (perhaps by engaging in further reading on the topics they found stimulating in Money Power).

Boman’s title for his book poses a question. For me, the answer given was “both, depending on who you are and what your personal situation is”. It seems though, in a macroeconomic context, the current monetary system does certainly serve the powerful few whilst it is up for debate how effective it is at benefiting the many.

Money Power is available over at Arktos and Amazon.

the authorMartel Mosley
A beleaguered Brit doing all he can (which is never enough).
All posts byMartel Mosley