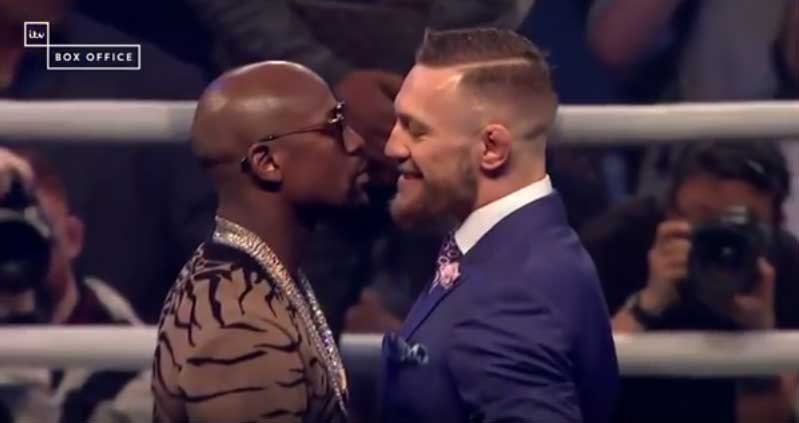 The scheduled fight between McGregor and Mayweather is starting to resemble a race war.

A MMA fighter will go toe to toe with an undefeated boxer. There’s been a lot of hype surrounding the McGregor/Mayweather fight and boy, have things started to escalate.

These are McGregor’s fans harassing Mayweather’s security detail and surrounding his car. Notice who the fans are and what color they are? And notice the bodyguards?

A lot of White people are feeling something. Something they haven’t felt in a while.

The Chateau had a good short story about racial pride. Some manlet Asians at the gym saw a buff Asian and were filled with pride at the sight:

The lesson is this: We find soulful nourishment in the accomplishments of our racial kin, no matter how personally unknown to us or in what part of the world we find ourselves entangled. Racial pride is natural, and really unremarkable until recently, and it’s why we honor the achievements and glories of our racial ancestors, no matter how distantly related, and it’s why a dweebening of asian manlets felt their hearts soar at the sight of Jacked Asian. We can’t help ourselves, and that is why our quisling lessers have to spill so much verbal diarrhea trying to convince themselves they have the feeling under control.

Race matters. It won’t stop mattering, so we may as well start speaking honestly and truthfully about it.

And McGregor, for better or for worse, is tapping into that racial pride, whether he feels it or not. (Chances are, in fact, that he doesn’t. He is as progressive as most every normie is these days.)

But damn, does it feel good on a visceral level to see him rub Mayweather’s chrome dome and stalk around him in the boxing ring.

It reminds me of Trump breathing heavily into his mic and stalking Hillary at the debates.

McGregor is no bastion of White morals like humility, stoicism, decency or any of that 19th-century stuff. He’s 100% confrontational, vain, and in-your-face mockingly rude.

I won’t lie, I like it. Gets the blood flowing to see him trash talk and prance around on stage like that.

And that’s probably part and parcel of the spectacle that’s been prepared.

See, there’s a very high chance that this fight is rigged and that this is all a cash grab by Dana White (UFC President) and co.  And a quick reminder: Dana is a riod-head, just like Joe Rogan and while he postures as a tough guy, he’s as PC as they come.

@UFCLORDBASH I'm not Jewish but I'm blockin u for being an anti Semitic POS. come find me I would LOVE to meet u face to face.

By the way, back in the day, the mafia would put on fights between Black and White fighters, get Whites to put money on their champion and then have him throw the fight.

Boxing, bare-knuckle or not, underground or not, has always been very corrupt. And I can’t help but feel that this will be more of the same. A lot of people are already making a ton of money on this anyway.

McGregor has agreed to boxing rules, and he’s an MMA fighter.

MMA is very different from boxing, and Mayweather’s style is to just rack up the points, not go for KO’s. The last time I saw him fight was with Pacquiao, which was a total waste of time. He’ll almost certainly just hang back and poke at McGregor instead of going toe to toe. So even if McGregor isn’t planning on taking the dive for a massive cash payout, the odds are still stacked against him.

I can see Mayweather’s trainers preparing him with advice:

“You got dis, but watch out fo’ dat cracka’s hook. He got some juice on dat muffuga!”

Despite my foreboding about the reasons for this fight being allowed to take place, I can’t help but get into the hype.  McGregor has become a symbol of racial pride for many- even if they themselves don’t understand what it is that they are feeling, tucked away as it is under layers of preventative PC self-policing.

It’s not just his fans though.

McGregor is starting to resemble a sort of Hitler-reborn figure internationally. At least according to the Lying Media:

McGregor was criticised for telling Mayweather to “dance for me, boy” – a phrase that has racial overtones in the United States.

Ah, the same siren song. I’ll spare you the trouble of clicking the link. The article just talks about why McGregor might be racist and his father jumps in to defend him:

And Tony McGregor has now given an interview in which he has insisted that the fight “is not about race” and that his son is “not a racist”.

And there you have it, the minute the media began to float the questions of “is he a racist?” the answer became unequivocally, “yes, yes he is.” And no amount of protestation on his part or his father’s will change that now.

This fight is now officially about White vs Black, and despite all my reservations, I know who I’ll be cheering for on August 26th.