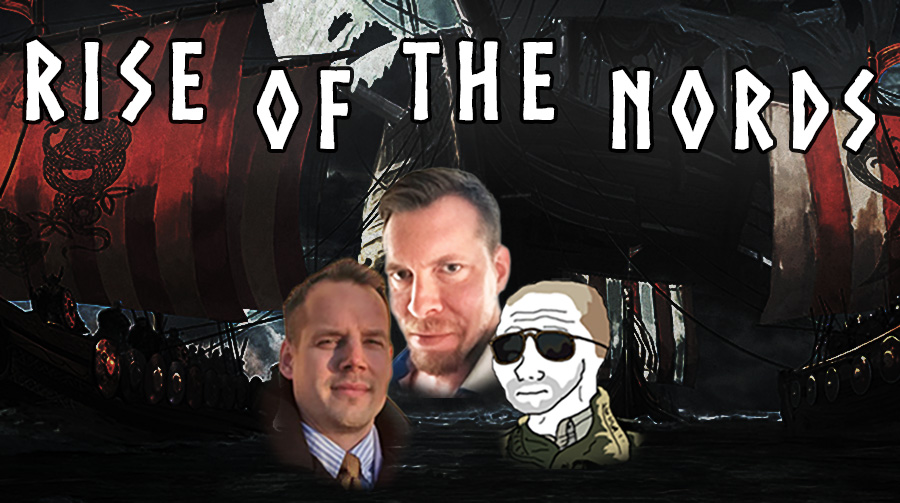 The Rise of the Nords

The Nords are rising. Join us.

“We live in interesting times”, as Richard Spencer says from time to time. And that’s certainly the case for us who are deeply involved in not just living in the times, but also changing them. Indeed, the timeline has shifted so dramatically these last two years that one cannot help to wonder how long the liberal lefties can go on.

On March 21 in The Current Year of 2017, Daniel Friberg called up Christoffer Dulny, one of the highest ranking staff members of the Sweden Democrats who was working as a budget chief in the Swedish Parliament. Friberg suggested that they should form a new metapolitical movement, with its own media platform tied to the “AltRight.com mothership”, with Christoffer as chairman and the well-known alt-right community organizer Gustav Hörngren as part of the initiative. At first, it sounded like a wild idea, but after a few hours of conversation and brainstorming, both Christoffer and Gustav booked flight tickets to Budapest where they for the following five days engaged in intense brainstorming, strategizing and ideological discussions. Shortly after returning to Sweden, Christoffer quit his well-paying job in the Swedish parliament in order to work full time building the Nordic Alt-Right together with his new colleagues, setting up a proper website and podcast. Nordic.AltRight.com had been born.

AltRight.com — The Beginning Of A Centralized Power Structure

The formation of AltRight.com is already a success story as described by Dr. Reza Jorjani, Editor-in-Chief of Arktos, in his speech at the Identitarian Ideas IX in Stockholm of February 2017. It had started during a Skype conference, suggested by Jorjani, between him, his colleague Daniel Friberg, and Richard Spencer of the National Policy Institute (NPI) and Radix Journal. During that phone conference, different forms of collaboration were discussed, and a consensus was reached to create a new media platform, “a more radical and ideological version of Breitbart”, as well as a global infrastructure, to facilitate the promotion of alt-right ideas to a wider audience. The foremost alt-right television and radio company, Red Ice Creations, joined in the following week. An American corporate entity was created and AltRight.com was born.

In the following five months of its creation, AltRight.com has experienced an immense growth in traffic and in short time become one of the leading alt-right media outlets. This is just the beginning.

Shortly thereafter, the construction of our international infrastructure was initiated by Friberg, through the Nordic Alt-Right, which was seen as a pilot project and a way to test the waters and develop a model that other countries and regions could then follow.

The Rise Of The Nords

It is no coincidence that the Nordic Alt-Right would be the first international movement to collaborate with AltRight.com. Firstly, Daniel was the one who came up with the idea of having national alt-right movements tied together in a shared infrastructure to create massive synergies. It also made sense, since “Sweden is the most alt-right country in Europe,” as BuzzFeed phrased it, which is indicated by the fact that no less than half of the board members of AltRight Corporation are Swedes. Hard times create strong men.

However, just as AltRight.com was literally created in a few days, Nordic Alt-Right got off to a flying start, thanks to the hard and efficient work in creating our localized website (nordic.altright.com) and thanks to Christoffer’s hard work and experience in quickly setting up our very own podcast, “Det vita pillret” (The White Pill) and starting, together with Gustav, to create quality original content in the form of articles and memes for our website.

It also helped that we already had a Swedish Facebook community of around 200 high quality and fantastic people, including skilled writers, musicians, coders and artists, of which many played a crucial role in building the basis of our new exciting endeavor.

Already less than two months after our launch, we’ve built a team of around 40 people who are helping out in various ways. We’ve had daily updates on our website, a weekly podcast, weekly physical training activities in Stockholm as well as various meetups and lectures. We are growing rapidly. The equivalent of New York Times (Dagens Nyheter) has already done several pieces about us, the latest issue of our version of SPLC (EXPO) was fully dedicated to us as they correctly perceive us to be the new counter-culture.

So what does the future have in store for the Nordic Alt-Right? The answer: Everything. We are already noticing the effects as we are filling a major void in the Nordic political scene. There is an immense interest in our ideas and a desire to become active in our project.

Our next bigger project will be to organize the World’s biggest alt-right conference, Identitarian Ideas X, in Stockholm on November 4th, with Richard Spencer as the keynote speaker, and Christoffer Dulny, Daniel Friberg, Nathan Damigo from Identity Evropa, Jason Jorjani from Arktos,  the Red Ice crew as well as many others. Our last conference attracted close to 400 guests. This time we are aiming for more than 500.

The Nords are rising. Join us.