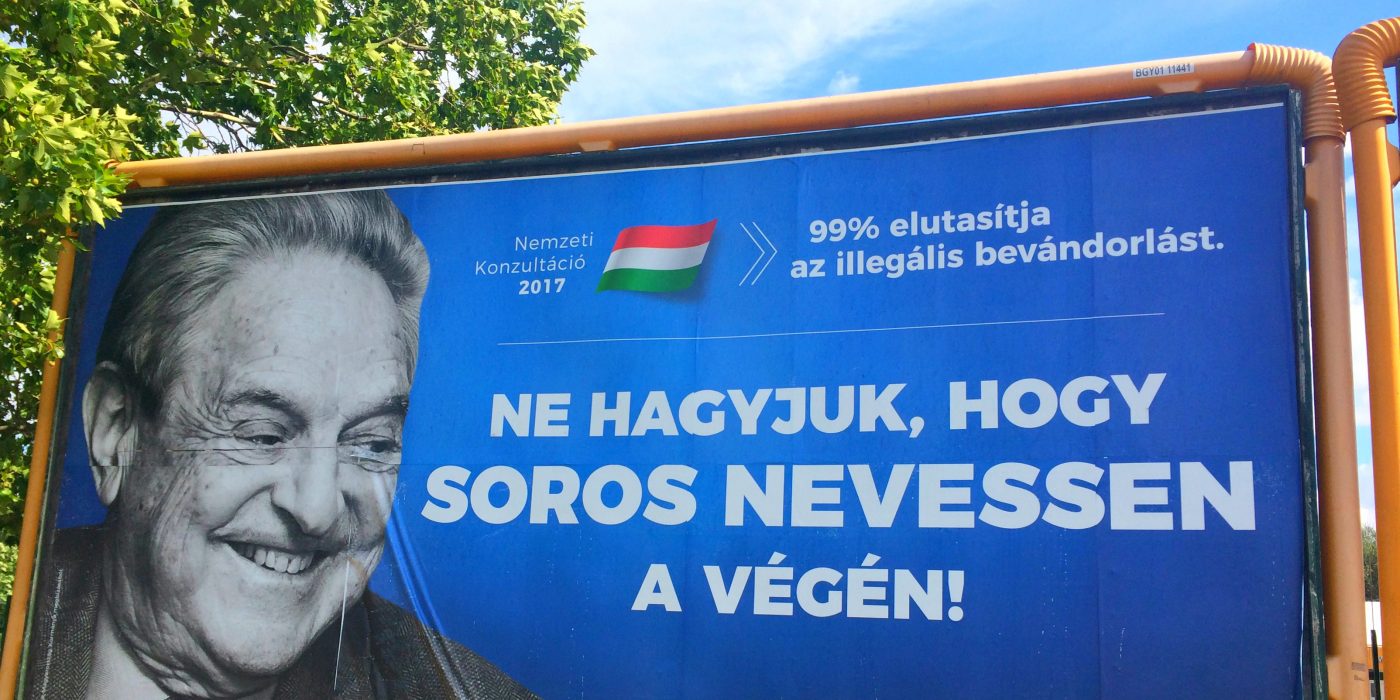 Don’t Want Migrants? Your Country May Just Be An Evil Dictatorship

Leftist NGOs continue to bash European nations who refuse to take in migrants. This time, Hungary fights back with a nationwide campaign against George Soros, and finds an unlikely ally in Israel.

While Italy is currently being invaded by hundreds of African migrants every day thanks mainly to unnecessary “rescue missions” off the coast of Libya from various human rights NGOS like Amnesty International and Human Rights Watch, Hungary is in a battle of its own when it comes to defending its territory against illegal migrants and similar organizations that want to flood the country with third world humanity.

Yesterday, Michael J. Abramowitz, the president of Freedom House, which is a US-based NGO dedicated to spreading democracy by using US “leadership” to influence governments around the world, published a scathing missive on its website against Hungary:

“The government of Hungary has resorted to tactics reminiscent of the darkest days of dictatorship in its vilification of refugees, and civil society organizations that advocate an orderly, humane policy of immigration. The imagery and language used by Prime Minister Orban’s government is deeply offensive and indeed anti-Semitic, especially its targeting of the Open Society Foundations and its Hungarian-born founder, George Soros. His organization has sought to secure fundamental freedoms for all Hungarians, including minorities. The political views of its founder are not legitimate topics of concern of Hungary’s government. The government’s demonization of refugees and of civil society should offend all who value basic human rights and open, democratic societies.”

“Tactics reminiscent of the darkest days of dictatorship”— this is in reference to a national consultation in late May that was sent out to every Hungarian household, asking Hungarian citizens six basic questions on the state of their nation. For example, a couple of the questions were: “Should illegal migrants be placed under surveillance until the authorities make a decision on their asylum requests?” and “Should actions aiding illegal migration, for example human smuggling, be punished?” Over 1,650,000 Hungarian citizens answered those two questions each, and 99% chose Yes.

Without a doubt! Asking your citizens if they enjoy foreign-funded international groups pumping masses of clueless diversity into their neighborhoods is an unspeakably evil tactic just one step below gas chambers and mass graves.

Freedom House’s accusation of anti-Semitism over the Hungarian government sticking posters of George Soros around the country is also extremely telling and hilarious. After the national consultation, posters like the article’s featured image which I photographed near my home went up with the text “Let’s not let Soros have the last laugh!” The posters drew attention to the fact that the 86-year-old globalist “is a speculator operating an extensive mafia network, who is threatening Europe’s peace and future,” as phrased by Prime Minister Viktor Orbán in a speech during the unveiling of the consultation’s results.

For proof, all we need to do is take a glance down to the Mediterranean to see which groups are scooping up thousands of Africans out of the sea, and who is funding these migrant-loving nutjobs manning the boats. Not to mention, there are still migrants entering Hungary. Many of which can be seen carrying pale blue backpacks with the UNHCR logo on them, like the following group of feeble, innocent women and children that was captured in Ásotthalom on June 25th after cutting the border fence and using a ladder to scale it.

Human rights groups are literally equipping illegal migrants and setting them off on their way, deeper into Europe. Effectively, these groups are assisting the breaking of the law, but they get away with it because the “human rights” card is capable of trumping every other law. A human rights court battle in the EU is a visit to purgatory. A neverending game of paper-pushing.

At least Hungary has a surprising ally in their open battle against George Soros. After criticisms from the Israeli Ambassador, Israel’s foreign ministry released a counter-statement denouncing George Soros instead. Israel is even going a step further and forwarding a bill literally named “Soros Law” which aims to ban any person from donating to meddlesome NGOS acting against Israel. A Monday press release stated:

“It’s time to defund the left-wing organizations undermining the government, smearing Israel and trying to detract from its right to defend itself. We have to block their sources of financing and prevent them from harming the state.”

Wouldn’t that be music to our ears if one of our humble nations could boldly declare such a thing and not be ground into dust by outcries from leftists with six million Holocaust comparisons?

If anything, this move from Israel is proof that with the correct will, effective laws can be implemented. Europe can climb out of its self-loathing and it can deport migrants and ban the invasive NGOs shrieking futilely about dictatorships. All it takes is the people, the right mindset to incite change.

Which is why we are here, on altright.com, eager to sow more red-pills.

TopicsGeorge SorosIsraelItalymigrantsngos
Share on FacebookShare on TwitterShare on RedditShare on VKontakte