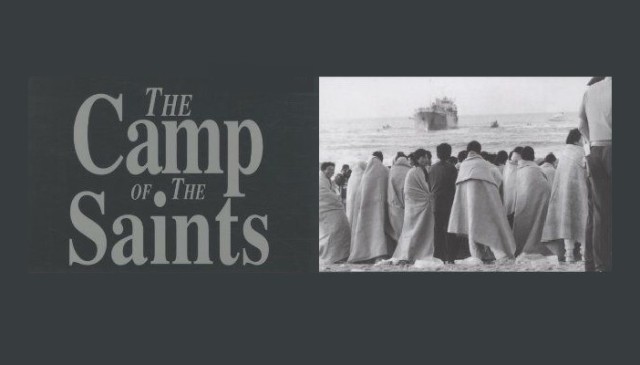 They will never stop coming.

The Migrant wave isn’t over.

The first wave won’t be what destroys Europe. It will be the 3rd or 4th wave that does that. I’m calling it now, this isn’t going to be a slow demographic death. No, the refugees are flowing in at massive rates that will only increase. Europe has blinked in the face of the first assault wave. Now, everyone will be emboldened. Germany hasn’t stopped taking in more refugees. Just because you haven’t heard about it on the news doesn’t mean it isn’t happening. We have been living in a Camp of the Saints scenario from 2015 onwards:

The Ministry of the Interior announced that it granted asylum to 90,389 people in the first six months of 2017, and expects that Germany will receive a total of 180,000 migrants this year  – a fraction of the influx of almost a million who the country admitted in 2015.
However, Die Weltreports the situation — with regards to housing, welfare, education, integration, and crime  — will be far more demanding for taxpayers than official figures suggest, as they do not take into account the migrants who are flown into Germany as a result of family reunification rules.

Wait for it, here’s the kicker.

Responding to a request by the German broadsheet, the Federal Foreign Office said it estimates the process will enable an additional 200,000 to 300,000 to travel to the European nation.

According to the Foreign Office, the calculation is based on the number of visas which have already been issued, and on how many applications the department expects based on patterns currently seen with regards to average family reunification numbers for Syrian refugees…

Though Germany has now suspended the possibility of family reunification for many newcomers until March 2018, authorities are still overwhelmed by the huge backlog of claims which come as a result of Angela Merkel’s move to open the country’s borders in 2015.

I’m sure that the German bureacracy with its characteristic efficiency will get through that backlog, never fear.

And that’s all just legal migrants. What about an illegal wave like we saw in 2015? Hard to say, but things could get very bad very quick. We saw about 100,000 migrants already cross the Mediterranean sea this year.

But the German government is prepared, never fear:

Social networks could face fines of up to 50 million euros ($57 million) for persistently failing to remove hate speech from their websites, under a bill the German parliament passed July 7.

No criticism allowed.
Share on FacebookShare on TwitterShare on RedditShare on VKontakte