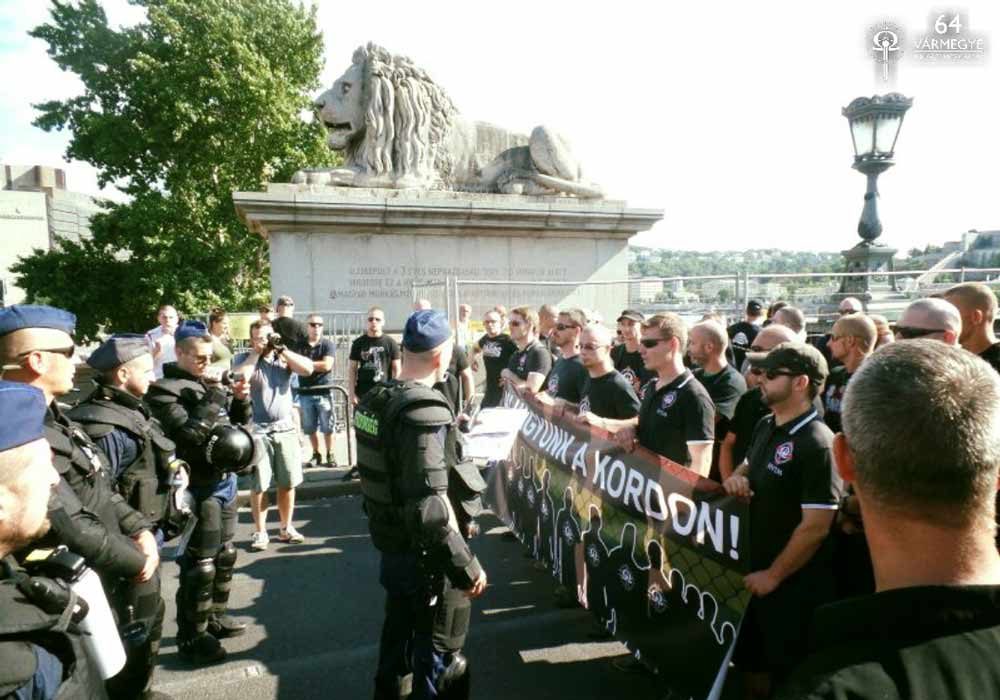 Gays and Nationalists Face Off in Hungary During Budapest Pride

A cultural war is raging in Hungary, as it becomes apparent when determined nationalists take a stand against the Budapest Pride parade.

Last week in Budapest, it was time for the usual brigade of bondage-equipped gays, lesbians, transgenders, dreadlocked hippies, confrontational feminists, lovers of illegal Islamic migrants, and their extreme left-wing political backers to rally as loudly as possible in the city center, much to the dismay of the majority conservative Hungarian population and to mixed reactions from throngs of tourists from around the world.

Like all gay pride parades in the West, the one in Budapest also serves as a noisy, colorful front which globalists use to ram through their anti-European and anti-family ideology on an unsuspecting and well-meaning public. The mere fact that these “progressive” groups find the need to obsessively repeat feel-good words like: freedom! equality! human rights! justice! tolerance! in describing their intentions to permanently remold society should make anyone at least mildly suspicious.

Glancing at the official list of organizations and groups participating in the parade, one can spot all of Hungary’s liberal political parties, as well as Migszol (Migrant Solidarity Group of Hungary), and some more peculiar outliers: vegans, furries from Poland, and members of Poliamoria Magyarország which is a group that promotes free love and multiple-partner relationships.

The US Embassy was naturally also present. Last year, the former US Ambassador Colleen Bell, who is one of the Obama administration’s top donors, was spotted leaping about in the parade to obnoxious techno music whilst surrounded by bodyguards, but this year the Embassy found it sufficient to just decorate their website and Facebook page with rainbows and release an official joint statement along with 35 other Embassies, imploring Hungary to do more to make LGBTs feel better.

“We note the important advocacy work of the LGBTQ civil society organizations in Hungary today. Respect for human rights — including justice, equality, non-discrimination, freedom of expression as well as the non-interference in the practice of these rights — and the rule of law are the foundations upon which democratic states are built.”

It’s also noteworthy and extremely coincidental, I’m sure, that multiple Jewish organizations, like the Sim Shalom Progressive Jewish Congregation, were present, that the George Soros-funded Central European University is a top sponsor of the event, and that the vast majority of the people who held speeches on a large stage set up on Kossuth Lajos Square before the parade were Jewish. Most famous of the speakers was Árpád Schilling, founder of Krétakör, which is an organization that runs modern performing arts projects and liberal education workshops. Schilling also openly hates Prime Minister Viktor Orbán, and men, in general, as can be observed from his speech at the Verzio International Human Rights Documentary Film Festival:

“When I see women suffer, I can discern the silhouette of men in the background. When I see children suffer, I can also discern men in the distance, and usually it is always men that I see everywhere when the topic is human suffering. Men who pray, engage in politics, do business and make war. It is men who pass harsh laws and build walls that reach the sky. It is men who play smart aleck and commit violent acts. Men. Just like me. I am ashamed. I know that as a man, I will have to carry this shame with me all throughout my life. I know that I will have to repent in the name of all men for what men have committed in this world, there is no excuse or forgiveness.”

That’s right, men, you are the root of all evil. Just emasculate yourselves already, take some female hormone shots and fall in line with our beautiful vision of a borderless, corporation-dominated world! It’s like one neverending Pride parade. The rainbows are there to distract you from the darkness of reality, from the color we’ve taken from your soul. 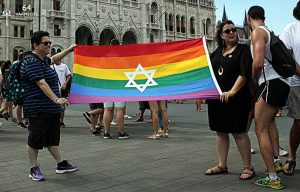 The parade, however, did not have the chance to pass by without heavy opposition. Hungarian nationalists, after heroically shitposting online for months and dealing with countless Facebook bans, managed to successfully pressure the police into setting up cordons along the entire event’s path due to security concerns. Effectively, this meant big fences separating the gyrating degeneracy from the general public.

The parade’s organizers were naturally furious and released an official statement: “We find it outrageous that in today’s Hungary it can happen that police would rather lock a peaceful gathering into a cage instead of concentrate on placing barriers for the violent counter-protestors.”

“In today’s Hungary” is the phrase liberals use whenever damning the nation for not being progressive enough. It’s the Hungarian equivalent of The Current Year meme.

Before the start of the parade, an organizer announced on stage: “We want to be free! Today we have told the police that we will march on an alternative route. We want to march without fences! … We are standing up against being forced to shut down ourselves, against fear, against being silenced. These are all part of our everyday lives. The cordons are a symbol of all that.”

Cheers from the pliant crowd. The parade ended up going towards the Danube, but before it got there, members of the Hungarian nationalist group HVIM (Sixty-Four Counties Youth Movement) formed a blockade on Széchenyi Chain Bridge and had to be pried away by scores of riot police.

I spoke with Béla Incze, who is co-head of the Budapest chapter of HVIM, and took part in the bridge’s blockade. “Although we couldn’t stop the parade and we weren’t even able to seal off their path, we consider the events a success. It is unique in Europe that after we made public our notice to mobilize the nationalist scene, the police immediately announced that the parade could only be secured by hermetically sealing it off. Furthermore, the parade’s organizers considered canceling everything days before the event. We managed to break into the parade’s path. [The Police] could only continue the event by individually prying us off the bridge. With this, we proved that resistance lives, and that we are capable of effective operations,” he said.

After the parade reached its destination at the foot of Buda Castle, the attendees slowly dispersed and many continued their rainbow-addled revelry late into the night at an afterparty which our European Editor, Daniel Friberg had the uncertain pleasure to witness firsthand, with a German film crew he was leading around who wished to have his perspective on the parade for an upcoming documentary film on the Alt-Right.

HVIM was not the only nationalist group at work that day. During the parade, a much larger event was taking place in Vecsés, on the southeastern outskirts of Budapest, before the Memorial of Hungarian Conquest commemorating the Battle of Pressburg. Hundreds of Hungarian nationalists gathered to cheer on the formation of a new right-wing political movement. Members of Identitesz, an Identitarian student’s union, and Betyársereg, the strictest and most ideologically-sound nationalist group in Hungary, united under one flag. Their party, named “Erő és Elszántság” (Strength and Resolve), was created to provide an authentic outlet and voice for the disillusioned original radical voter base of Hungary’s main right-wing party, Jobbik, which has been accused of cucking in hopes to win next year’s election. Listening to the speech of Zsolt Tyirityán, the leader of Betyársereg and now this new party, it is apparent he is hardly interested in softening his stance or chanting sugar-coated slogans about muh human rights and freedumbs, and his cheering supporters expect nothing less than stark sincerity from him:

“We must declare war against the ideology representing Satanic darkness which has made Europe unliveable and defenseless. The name of this is liberalism. It is liberalism that begins a degenerative process in man through which he loses his ethnic identity, his racial identity, and gradually, as can already be seen, his sexual identity, as well. This type of man is incapable of life and goes against the God-created ideal of man, and thus he is a representative of Satan. This type of man must be banished from our living space, and we must do everything in our power to stop their type from being created.” 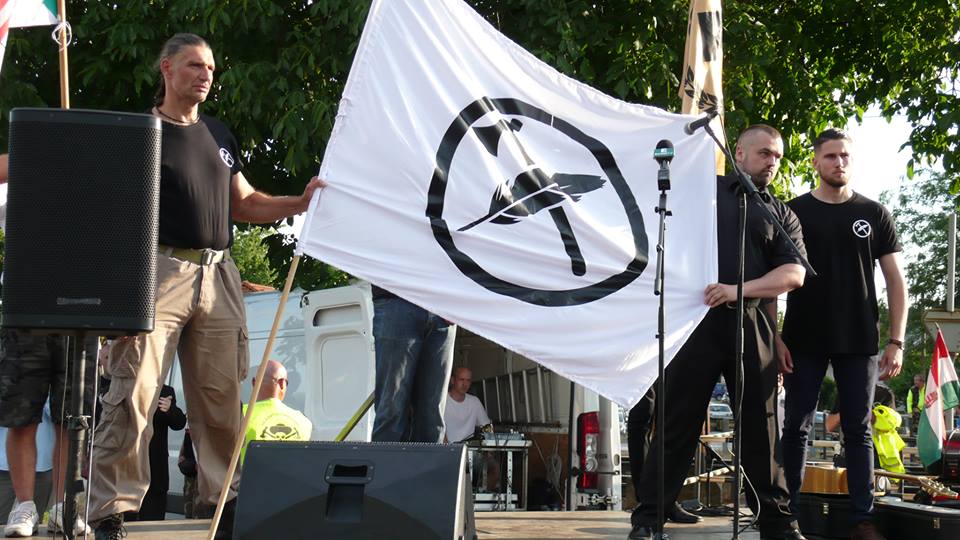 And so, there you have it: one day in Budapest. Gays and assorted sexual deviants parading across the city’s most historic bridge while on the sidelines and in the distance, Hungarian nationalists organize fearless protests and form new, ever-strengthening alliances. There is certainly a cultural battle taking place in Hungary, and the polarization between right and left will continue far beyond the next elections in 2018. The outcome, as I see it, is uncertain.

When it comes to the future of the Hungarian nation, Béla Incze had the following to say: “As a father, I can tell you that it’s not enough to passively resist these changes. When my son grows up and asks me why the world is the way it is, then I will tell him with complete peace in my soul: I did everything in my power so that it wouldn’t be this way. Live your life as I have lived, and then you may die standing proudly.”

Topicsgayshungarylgbtnationalism
Share on FacebookShare on TwitterShare on RedditShare on VKontakte