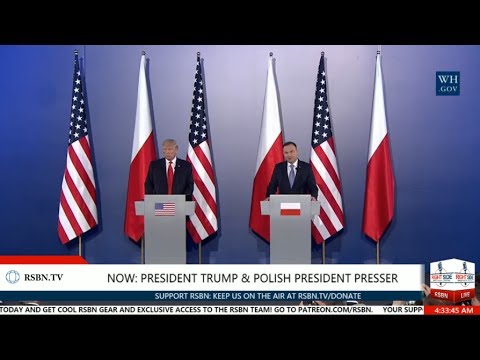 Hopefully The Neocons Are Right About Trump

Conservatives cheering for Trump puts me off.

Reading liberal or neocon journalists can either make you mad, or you can take solace in their dire prognostications.  Because what is “dire” for them is often what we might consider a pleasant outcome.  In this frame of mind, you can read MSM newspapers with cheerful optimism.

Case in point, when neoconservative NeverTrumper David Frum warns us that Trump’s Warsaw speech was glib and contradictory, we can be glad that Frum might be right.  When Trump said that we would fulfill Article 5 of NATO, which commits the US to defend NATO members, Frum doesn’t believe him.  Hopefully Frum is right!  When Trump boasts that the NATO nations have stepped up their military spending, Frum sees this as caused not by Trump’s negotiating skills, but by the fact that NATO nations no longer feel that they can rely on the United States for defense.  Good, why should they?

Here is Trump’s assurance of his commitment to NATO from the Warsaw Speech:

To those who would criticize our tough stance, I would point out that the United States has demonstrated not merely with words but with its actions that we stand firmly behind Article 5, the mutual defense commitment.

Here’s Frum on his skepticism about Trump’s commitment to NATO:

But who now will be reassured by these glib words? The whole world has seen how long and how fiercely President Trump squirmed to avoid pronouncing them—and the world, friendly and hostile, will draw conclusions accordingly.

That’s a fair analysis; and again, I hope Frum is right.  Frum demands that we not take Trump’s words at face value, but instead put them in the context of Trump’s prior stated positions, and his actions.  Trump declared NATO “obsolete” during the campaign.  Have the facts on the ground changed since then? Of course not; it is only a matter of political pressure being put on Trump to take a more conventional position.  In that light, it is fair to deduce that Trump is indeed paying glib lip-service to this commitment to NATO, while his heart is not in it.

Frum claims that Trump admires “Putin-style authoritarianism.”  So does that mean we might get something done finally?  Frum feels that Trump was using Western Civilization as a dog whistle to “religious and ethnic exclusion.”  Yes, I heard that too!  When we hear Trump warn about a threat from the “East”, we think Muslim hordes.  Frum, on the other hand, hears “the Russians.” Risible!

In part, Frum criticizes Trump for hypocrisy, extolling free speech while he supposedly does not really believe in it.  Praising the empowerment of women while he made “lewd remarks about assaulting women” (he said “they let you do it”—by definition not assault!).  Frum criticizes Trump for referencing “ancient heroes”, while he apparently is not familiar with the “hero” Frederick Douglass.  Perhaps that is because Trump attended secondary school during a less Culturally Marxist moment in history.

Don’t get too caught up in an echo chamber—especially if you frequent boomer conservative news outlets.  Sometimes you miss the whole story.  Boomer conservatives often seek to show that Trump is indeed sticking to conventional neocon foreign policy.  Ironically, I take more comfort in liberals’ and neocons’ dire take on what Trump has managed to achieve.