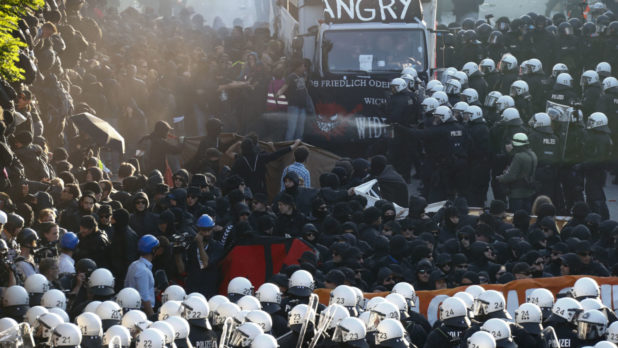 The G20 Summit Was All About Fiddling While Rome Burns

Things are going to get much worse before they get better.

I sometimes wonder what the top politicians think. How much do they know that we don’t? Or rather, how deep are they enmeshed within their own internal schemes, their own summits and their own games of 5th-dimensional chess that they miss out on the obvious.

Do they ever look out into the city, into their own countries and wonder what the hell is going on?  Merkel could have just taken a look out onto the city of Hamburg to see what her hand has wrought.

The people have gone insane and it doesn’t matter what comes next.

Do they feel it? Have they seen how much things have changed? Or do they just not care?

The militant anti-Whites, the weirdness and exponentially growing population of freaks, the cheap sexual thrill-seeking that is commonplace everywhere… All of it has become part and parcel of living in a Western city.

The G20 riots were not a political protest.

This was like watching a child throw a tantrum in a crowded restaurant. The child has no real reason to be acting up, or rather is acting up for the wrong reason and all eyes go to the parents to see how they could have raised such a little monster.

Sometimes it’s clear that the parents don’t care. Other times, it seems that the parent is distracted. They’re on the phone, discussing important matters, probably. The child doesn’t understand though. The child doesn’t care. They’re on the floor, screeching and wailing. They say that they want more ice cream when in reality what they really want is a parent that cares about them and listens to their concerns.

Do the politicians listen? Or are the courtroom intrigues more important than the health of their people?

Life has gotten coarser, more atomized and deeply alienating for many people in the West. People have changed. The social fabric has frayed. And I am not even talking about the effects of Vibrant Diversity yet.

See, a spoiled child will never admit that they are spoiled but will act out for attention instead.

And that’s what we saw in Hamburg. The slogans they chanted didn’t matter. They are political illiterates in the streets, children in that sense. They don’t know why they’re bored, spoiled and unhappy. But they’ll act out to make sure that everyone in the restaurant knows that something’s wrong.

“Down With Racism!” they cry. They don’t even know what they’re saying, bless their little hearts.

The rest of us just shake our heads and sigh. We know it’s going to have to get a lot worse before it gets better.