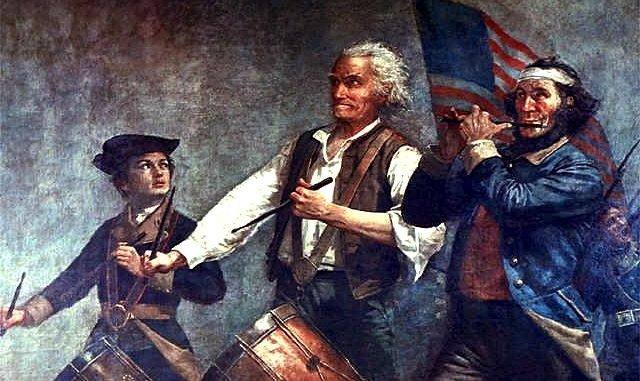 The Nation Without a Country

“I wish I may never hear of the United States again!” screams the protagonist of Edward Hale’s syrupy allegory, “The Man Without A Country.” Of course, Lieutenant Philip Nolan repents of his wishes, building a shrine in his room to the country he longer knows, comparing his nation to his mother, and, as he dies, eagerly relating to a visitor how he has offered prayers for the President of the United States for many years.

Hale’s intent was to inspire patriotism in the North during the Civil War, with the story serving as a condemnation of the “infernal rebellion.” Yet it was not the Confederates who lacked a country. Rich and poor, White Southerners were defending their land, history, and heritage in a far more direct manner than Lincoln’s army of conquest, which as the war went on consisted of an increasing number of free blacks and recent immigrants used as cannon fodder to crush the founding stock of the South who actually created the Republic.

How absurd to imply that a man like Robert E. Lee, who opposed secession but refused to wage war on his native state, was some kind of deracinated individualist wiling to turn his back on his country for some individual gain. Lee and those like him fought not because they had turned their back on their country, but because they thought they were protecting what it was meant to be.

It’s those atomized, rootless denizens and transplants, like the banker from New York Terry McAuliffe (who disgraces the Old Dominion as its governor), who are eager to tear down the statues of men like General Lee. In this strange “democracy” the sniveling commissars who pretentiously call themselves journalists claim to be defending, an actual people with longstanding ties to particular land and tradition have far fewer rights than those who just showed up. Both in America and throughout the post-white West, those who rule us openly declare our countries really belong to any Third Worlder who stakes a claim rather than to those Europeans who built them.

Citizenship in the United States of America or in most Western countries has been compared to something akin to a Costco membership, albeit with an ever–increasing risk of death from a sudden excess of vibrancy. This understates the case. It’s closer to a Costco membership where you don’t buy things for yourself, but are forced to spend your money to obtain goods for your worst enemies. Then they kill you.

Not surprisingly, it’s increasingly difficult to string together even the pro forma celebrations of “patriotism” which sustain Western countries. Canada Day is now an opportunity for speeches about how the Europeans should have never come, Bastille Day will be hosted by a new French President who appears utterly indifferent to the existence of his own country, and for all the blather by conservatives about America being defined by its “values,” there is no agreement what those values actually are.

What we call civic nationalism is really just loyalty to a normative White culture and identity that grows ever more distant as The Great Replacement continues and overtly hostile non-Whites make up an ever-greater proportion of “our” citizens. There were no “Native Americans” or “Indigenous Canadians.” Americans and Canadians did not exist until Europeans created these nations.

A White nationalist recognizes this and strives to build an alternative to this genocidal system, to either conquer the state or establish another sovereignty to ensure a future. To hopelessly identify with the occupation regime in Washington is to collaborate in the destruction of your own people. The Americans who are beating their chest aboutthe greatness of the United States are reminiscent of some divorcee’ pining over an idealized ex-wife who already moved on, or an aging athlete endlessly ruminating to a bored audience about glory days on the high school football field.

We know this, and yet the United States and its symbols are something without which we cannot do. At the recent Alt Right march, the Stars and Stripes flew next to the Confederate battle flag. Hats bearing the campaign slogan of the Commander-in-Chief competed with symbols appealing to the ideological legacy of the federal government’s enemies during World War II. No matter how tribal minded or militant, you can’t cut yourself off from the life of the country, even if you want to, even if achieving such a separation is the purpose of your politics.

As with our parents, we are shaped by our motherland or fatherland in ways we don’t fully appreciate until adulthood. And just as, even a bad or hateful parent shapes us, a hostile government imprints itself on our consciousness in a way we can never fully break of. Even today, when condemning America’s aggression against Bashar al-Assad, many might catch ourselves bemoaning how “we” are bombing Syria.

None of us know how this struggle for White survival is going to play out; few in 2012 would have expected a pseudo-nationalist President Donald J. Trump in 2016. But whether we get to where we need to be through secession, a wholesale breakdown of civic order, a nationalist takeover and a long fight to Make America Great (And White) Again, or even some kind of new tribalism which establishes some kind of power base, we must avoid believing we will carve out something entirely unconnected with what came before.

“We have it in our power to begin the world again,” cried the sophomoric agitator Thomas Paine in 1776, whom the far more erudite and wise Teddy Roosevelt would famously label a “filthy little atheist.” Paine would ultimately end up imprisoned by his second revolutionary fatherland during the French Revolution before dying impoverished and almost forgotten.

Enduring revolutionary movements become the culmination of a people’s history, not a complete separation from it. And we will have to draw on the American past (perhaps even some of the parts we despise) in order to build a White future.

Many refuse to accept the reality of race or deny the blank slate on a genetic basis because they don’t like the idea so much of your own personality and identity is unchosen. The perversions of our time, the pregnant transgenders, and the “otherkin,”are simply an extreme manifestation of liberalism’s central conceit that individuals are self-created and self-defined.

Yet something similar applies in a historical sense. Everyone seems to sense the failed American Experiment nears its denouement and the false ideals of the founding are leading inexorably to their logical conclusion. Yet much as Western Europe after the fall of Rome was dominated by the struggle over the Empire’s legacy (and perhaps still is), Europeans on this continent will be defined by our “American” identity for centuries to come. This remains true even if we rise against the American polity itself and even if we build an entire movement in defiance of it.

There’s nothing new about any of this. The ability to reconcile dueling Narratives in the past of a nation is not evidence of doublethink, but a supreme act of artistry necessary for a people to endure. “Creators were they who created peoples, and hung a faith and a love over them: thus they served life.”

The legacy of the Tsar and of the Supreme Soviet was ultimately reconciled in the larger Russian story which exists today, and it is what allows the Russian people to expect a real future for their ethnos. In contrast, contemporary Germany views its current existence as a kind of living rebuke to its entire past; it’s no wonder the nation itself is on the way to extinction absent revolutionary change.

The metapolitics of the American founding were despicable. While the Founding Fathers should have seen where this was going to lead, they didn’t. But in terms of what they actually thought about race and culture, they were close to white nationalists and certainly closer to us than any other political grouping which exists in America today. And the American experience and history contain some of the greatest victories and accomplishments of Europeans worldwide.

Leftists and non-Whites know this, which is why they sneer in disgust at any display of patriotism, even those directed at their golem, the United States of America. In the leftist narrative, America was founded on universal egalitarianism as well as simultaneously being based on White supremacy. The former theory is used to guilt and shame European-Americans away from any policies which could serve their own interests. The latter historical reality inspires the white nationalists of today and the hatred of the anti-whites for this country, even though they control almost every level of power in this System.

Some core idea of a country or an identity remains even after a complete ideological shift or the breakup of an empire. Though we struggle to revolutionize or break free of this System, we must avoid falling into the position of those French exiles who fled the country during the Revolution in order to wage war on the Republic. In so doing, they lost their claim on the nation.

Instead, it is better to look to someone like Napoleon, who reconciled the old with the new, and so united France. “The most precious possession you have in the world is your own people,” and while that relates most directly to blood, most people also feel it relates to some national identity which they will not throw away.

European-Americans are, in the most fundamental sense, the only real Americans. They are the only group which cannot be removed without this country changing in its essence. And so, even as we struggle for a homeland of our own, America still fully belongs to us in the most important sense. Mentally, we have seceded from the Washington regime, but the American identity is still ours in a way the likes of President Barack Obama, Senator Kamala Harris, or Congresswoman Maxine Waters will never understand. More importantly, it’s something they will never feel.

In its current form, America most likely cannot be saved. Morally, it certainly shouldn’t. But whatever comes next, the legacy of our forefathers is not something we can cut away any more than we can cut away a part of ourselves, even if we regard the formation of the country as a mistake, even if we would have been better off under the rule of George III.

Unlike Lieutenant Nolan, I have no particular attachment to the government on the Potomac nor any stake in the success of its officials. The more their schemes fail, the more prosperous and safe my own people will be. But this land doesn’t belong to the bureaucrats, the journalists, and the collaborators. It belongs to us. And even if we are forced from this place and must create a homeland elsewhere, what is essential and worth preserving about this country will go with us.

Whatever the egalitarian tripe of the Declaration, the success of this country was a product of the people who created it and conquered for it. It’s in our European blood.And as the descendants of revolutionaries, we have the unlimited right to do whatever it takes to preserve that legacy.