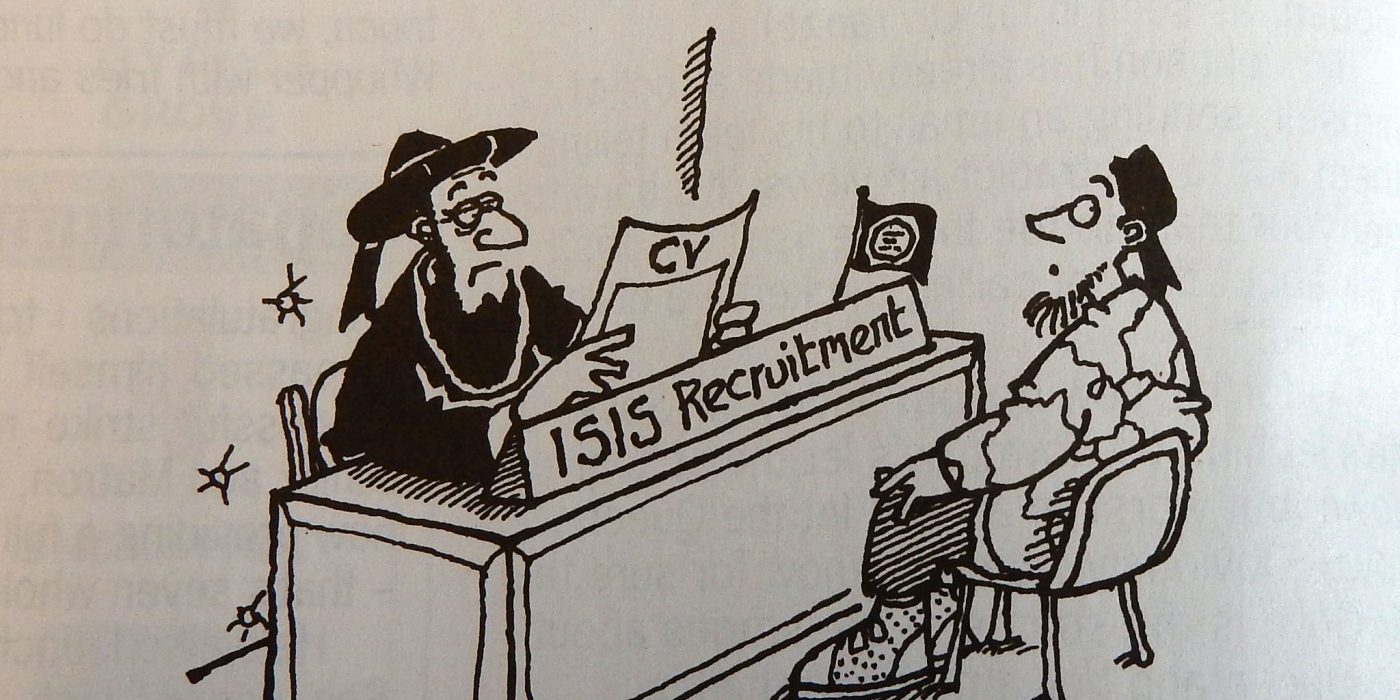 Apparently The Alt-Right Is ISIS Now

During a recent forum on the Alt-Right, “the Rise of Populism and Nationalism,” led by Jeffrey Goldberg of the Atlantic, there was an eyebrow-raising comparison made between the Alt-Right and ISIS.  It was just a tad on the paranoid and neurotic side—I wonder where these stereotypes come from? So what exactly are the similarities, besides of course the beheadings and taking over large swathes of territory in the Middle East?  Supercilious Asian Graeme Wood, also of the Atlantic, explains:

ISIS is very similar in their ideas and how those ideas penetrate.  With ISIS they don’t believe that most Muslims agree with them. But they believe that there are a few things that they might be able get people on board with. You ask innocently, ‘Do you think the best way to rule the world would be under a caliphate—with a really good caliph?’  And they you get ordinary people to say, ‘Theoretically, yes.’ Similarly with the Alt-Right you ask, ‘Well, do you think just anyone can be an American with any views at all?’  And they say, ‘You know what, no. There’s some limits, of course.’  And then you ask, ‘Are some of those limits racial? Are some of them religious?’  So what there is in both cases is this sense of a kind of lumpen-electorate, or base, that can be bought along with just a few thought leaders, getting those ideas penetrated in.

Goldberg asks, with just a hint of fevered fantasy, “Do you expect a radicalization process to continue in certain aspects of the White American community?  Do you think this is going to lead to systematic violence […]?” To this point, Rosie Gray, surprisingly, does not sign on to the ISIS/Alt-Right comparison:

I think if we were going to see full scale organized violence on [the Alt-Right’s] part, I suspect we would have sort of seen it already? They’re very disorganized, as a group of people?…You can’t really rule anything out, but the idea that there are sort of hordes of young guys in Make America Great Again Masks and Pepe the Frog signs carrying out violent raids…I hesitate before….[ question marks added to simulate modern American career- girl up-talk]

At this point, Goldberg interrupts her and asks hopefully if the Alt-Right might engage in terrorism. Good question, Mr. Goldberg, and rightly asked.  Like the Trump/ Russia collusion theory, let’s not let any lack of evidence deter us from what we just feel in our gut to be true.

This is a common misperception, and I’m glad to have an opportunity to address it:  There’s a difference between making ironic allusions to the Third Reich and being a bona fide, ‘90s style “Neo-Nazi.”  Some may quibble, but I’m not even sure what a “Neo-Nazi” is, seeing as that Hitler himself envisioned National Socialism as particular to a time (his time) and place (Deutschland). In Germany, they use the phrase “Nazi Club” to refer to the leftist tactic of stifling right-wing resistance by tying it to Nazism.  So it’s a tried and true tactic of the Cultural Marxists, which I dare say is becoming less effective as we proceed into the 21st century.

As Rosie Gray points out, the Alt-Right hasn’t committed any violence—and yet we’re treated like criminals. In my last essay, I talked about how the left labels anything non narrative-approved as a “lie,” and then simply moves on.  Here we see a similar lack of good-faith dialogue.  Why not invite Richard Spencer to the synagogue to speak to the man directly instead of speculating what his views might be or how he might have formed them?  If you are sensing any antisemitism in the Alt-Right, you could have discussed what actions from the organized Jewish community might be provoking these sentiments and moved forward from there.

Their premise is that the Alt-Right is out-of-bounds and self-evidently dangerous, rather than a group of fun-loving, free-thinking individuals.  Once they frame us in that light, they can quickly start addressing the vexing problem of how to get rid of us.