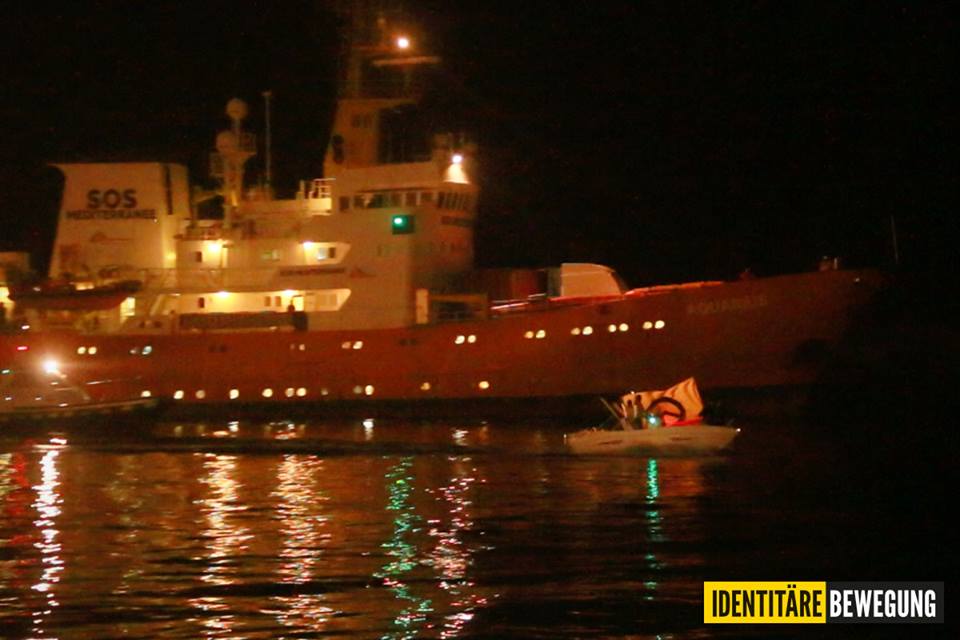 The Battle For The Mediterranean Rages On In Europe

As the Invasion of Europe continues, brave Identitarians are hitting the high seas to combat the migrant wave before it reaches their shores.

After a successful interception of an invasion vessel (aka a “Migrant craft” according to the lying press) last month, the Identitarian movements of Europe are gaining funds to continue their operations in the Mediterranean. Considering that the Elites would prefer to dump funds into continuing the Kalergi Plan, and obviously not the preservation of European peoples and cultures, it stands to reason that Nationalists would need to start self-funding their own defense.

In less than a month, the Identitarian movements in Europe have raised over 63,000 Euro to fund their sea campaign. The aim is to hinder or stop (((aid groups))) from shipping African “Migrants” to European shores. The NGO’s work directly with human traffickers to ship migrants from Africa to Europe. The NGO’s and the mafia get their cut while traitor politicians get new voters.

A win win for everyone involved.

Meanwhile, the Identitarian’s goal of 50,000 Euro’s was reached by the first Saturday of June. And they are still accepting donations which will go towards travel expenses along with renting boating and film equipment.

Just last month, the heroic French group, Génération Identitaire, was able to halt a “search and rescue” vessel from departing the Sicilian port of Catania. They were able to hold off the ship long enough for the Italian Coast Guard to arrive and stop the invasion process. Filming support videos from the coast of Sicily, they are currently working to the best of their abilities to continue to halt the flood of invaders to European shores.

Regardless of the dangers to Europe that migrants bring, traitor politicians are quick to denounce those seeking to defend their homeland. They try to morally shame the people of Europe with their crocodile tears and claims that these people would drown without European help. “It’s our duty to help them,” they say.

It’s simply absurd to think that anyone would continue to buy into such rhetoric. But all the while, more and more of these invaders make the crossing, and even the Leftist Press is having difficulties skewing the numbers to make it look like women, children, and refugees. Nearly 7,000 “migrants” have already been rescued this year alone off the coast of Libya, with nearly 1,700 confirmed as drowned. Obviously, these numbers do not represent the vast majority of those making the journey to Europe, not to mention the rate that they are breeding at once they are within European borders.

That is probably the worst aspect of it all- the blatant soft genocide of the European peoples. The Kalergi Plan is in full effect, and Globalist politicians are to blame, along with the (((people))) pulling the strings. The coordinated efforts of these evil doers are, however, being thwarted whenever possible by an increasing number of, what the Media calls, the “Far Right”. These Identitarian movements, Identitäre Bewegung in Germany, Génération Identitaire in France and others, are trying to wake up their illusioned brothers and sisters to the looming menace and the planned replacement of the European peoples.

By utilizing Direct Action Tactics, in the fashion of Green Peace, Génération Identitaire has set up a ‘Defend Europe’ website. The mission statement reads as follows:

“Ships packed with illegal immigrants are flooding the European borders. An invasion is taking place. This massive immigration is changing the face of our continent. We are losing our safety, our way of life, and there is a danger we Europeans will become a minority in our own European homelands.”

The goal of this organization is to “Get a crew, set sail for the Mediterranean, and chase down the enemies of Europe”. Pretty heroic, I’d say. Especially considering how quickly the world we live in is becoming increasingly hostile to the European peoples.

The “Migrant Crisis” of Europe is the bread and butter to this invasion. We see different, but increasingly similar issues here in the U.S. Nevertheless, it is becoming increasingly difficult to keep up with the flood of immigrants and their extremely high birthrates. Europeans are already a world minority, sitting at just under 10% of the global population. With our numbers decreasing every year and pressure mounting on every frontier, the great civilization we have carved out for ourselves is under threat.

It is up to us to take a stand for our people and future.

Luckily for those defending Europe, common boat merchants have even offered to work with and donate to, Italian Identitarian groups seeking to fend off the invasion. A small boat with the capabilities to travel about 20 knots can sell for as little as $10,000. This small vessel, as light and maneuverable as it is, can easily hang up a ship attempting to leave port long enough for the authorities to arrive. This type of operation puts a serious damper on the financial capabilities of these NGO’s that seek to further the destruction of Europe.

The more that they become hindered, the more that they have to give out funds to continue what they are doing. Not that it’s an issue for Soros funded groups like SOS Mediterranee, but ensuring that our enemies must divert funds to fight an ever-growing front, pretty much means that they will have to pay a steeper price for waging war on us.

With the rise of the American Identitarian movements like Identity Evropa, there are more young people than ever before stepping up to defend what’s theirs. The vast majority of these movements, in Europe or in the Colonies, consist of twenty-somethings that have grown tired of the Leftist Hate-Rhetoric that has been shoved down their throats since they were but children. The number of volunteers to defend the homelands of Europeans is growing daily and, hopefully, it will become a powerful subculture trend to go out in defense of ones’ people and homeland.

The Identitarians’ numbers are growing and the funds keep pouring in. It’s not just Identitarian groups in Germany and France though, even smaller nations are beginning to get into the fight. Identitäre Bewegung Österreich, the component in Austria, has already started boasting numbers around 40,000, with France estimating roughly 120,000. With the recent march in Berlin, Germany is fast becoming a battleground for the rights of Europeans as well, despite Angela Merkel’s attempts to flood the entire continent.

This is encouraging news. Young Whites are waking up to their disenfranchisement all across the White World. The future belongs to us.

You can help Identitäre Bewegung (Generation Identity) by going here. Or their WeSearchr fundraiser.