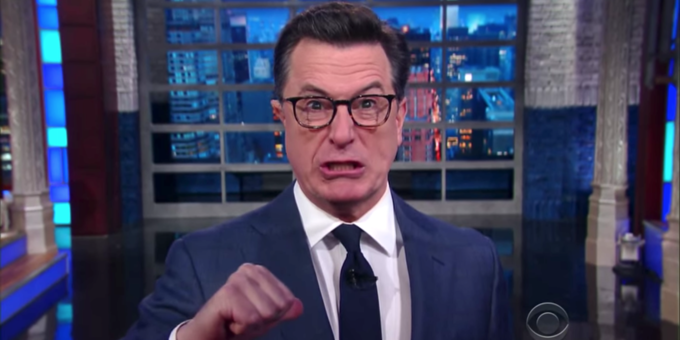 The Left feels that it can label anything that it disagrees with as being a lie. Because its all relative, right?

The forces of American shitlibery have decided that they are now the arbiters of “truth.”  They are astounded by the many “lies” of President Trump, the “lies” of his “propaganda outlets,” or even more nefarious foreign “propaganda” such as RT.  Is there anyone on social media who deviates from the liberal/neocon narrative? Twitterbots!  Putin shills! This goes double for the Alt-Right, which is completely beyond the pale. At least according to the Shitlib who with complete seriousness is constantly asking the question:

Should that even be allowed?

Apparently departing from the Cultural Marxist narrative is now to step outside of the zone of “Truth,” a concept which our elites are free to redefine depending on the exact cultural context of time, place and whatever their agenda happens to be at that very moment.  One must be very diligent in researching elite opinion in the New York Times, Washington Post, etc., to be sure that one’s perception of reality is in fact “Truth.”  Be sure you’re consulting the right journalists, lest you fall prey to “fake news.”

The Washington Post and other narrative enforcers have an army of “fact-checkers” ready to deploy Talmudic arguments to confine any narrative-deviant utterance to “lie” status.  Hillary Clinton herself during a debate with Trump implored these “fact-checkers” to analyze all of Trump’s statements.  She kept calling him a liar and relying on these mythical arbiters of “Truth” to back her up instead of actually engaging and debating him.

It’s all a bit presumptuous, no? I like to think that in our corner of the political universe, we at least allow for the possibility of good faith on the part of our opponents.  We allow for pathological altruism—which is to say that some liberal White people are actually too nice. It’s kind of a compliment!  I certainly wouldn’t assign good motives to everyone on the Left, but I’m not about to label any argument I don’t like as a “lie” and ask my “fact-checkers” to sort it out.

What perhaps these journalists and politicians are really saying when they point to Trump and scream about “lies” is just an expression of hatred.  Perhaps it’s a hatred of nationalism, which is an implicit threat to their political/ethnic interests.  For example, here’s Roger Cohen from the New York Times this morning:

Trumpism is a collective gaslighting at Twitter speed.  It is founded on the principle that velocity trumps veracity—perfect for the President’s manic personality […] It seeks to achieve dominance through a series of meaningless but cumulatively manipulative statements.

Mr. Cohen and his compatriots’ real resentment is the threat to their traditional hold on the media that Trump’s Twitter missives represent, and which the internet (with all of its real-talk) more broadly represents. But of course he’s not going to say that; so instead, in so many elegant words, he is just screeching “Liar!”  And if you read on, he transitions to another nuanced argument:

Admittedly, Trump’s unconventional stratagems are puzzling until one sees that each Tweet is part of a larger puzzle.  In that sense, Mr. Cohen gets it right.  But that hardly means that Trump’s larger designs are somehow a “lie”.   Again, what hubris our critics have!

“Truthiness” is a neologism coined by Stephen Colbert, then a decent and sometimes funny satirist at Comedy Central meant to mock the self-assuredness of Fox News style Bush-era conservatism.  Wikipedia explains:

The concept of truthiness has emerged as a major subject of discussion surrounding U.S. politics during the 1990s and 2000s because of the perception among some observers of a rise in propaganda and a growing hostility toward factual reporting and fact-based discussion.

In other words, Colbert mocked the GOPe for their laissez-faire attitude with facts.

Nowadays, its the Left that has a loose interpretation of “Truth”. They tell us:

My arguments are “fact-based” and yours are “propaganda.”

Now that Colbert has come out as a rabidly partisan anti-Trumper, is it fair to say that we need to ponder the truthiness of this whole concept of “Truthiness”?  Because we are now saturated in a media environment which operates under its arrogant precepts.