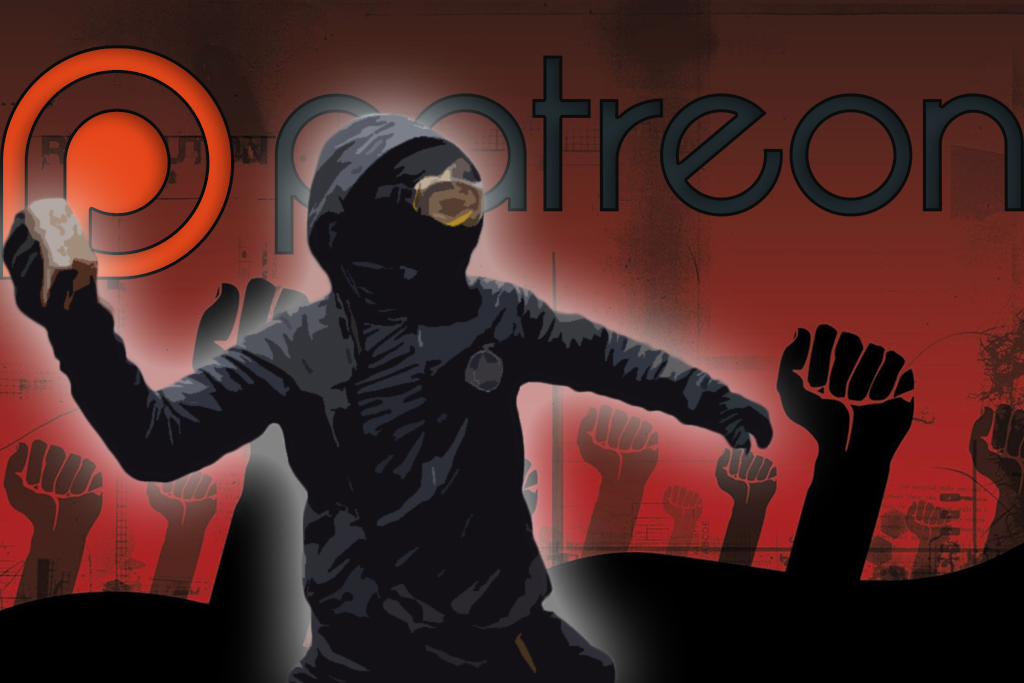 Patreon Is Supporting An Anarcho-Terrorist Organization

Corporations in the West work hand in hand with left-wing terrorists.

Patreon has been allowing It’s Going Down (IGD), a violent anarchist and so-called “anti-fascist” organization, to fund their terrorism using its service. The crowdfunding service was founded in 2013 by two men named Jack Conte and Sam Yam after Jack was looking for a way to fund his living so he could dedicate his life to making Youtube videos. Patronage of artists is nothing new, and the concept of a service that brought together artists, musicians, and political activists with those who enjoyed their work and were willing to contribute to it, seems to have been wildly popular with investors.

“A person who uses unlawful violence and intimidation, especially against civilians, in the pursuit of political aims.”

The company has done well for itself with many entrepreneurs looking to use the platform, but unfortunately, like most companies in the current year, Patreon has an anti-White & anti-nationalist bias when interpreting and enforcing its policies. All Patreon users are required to agree to Terms of Service and Community Guidelines that include distributing personal information, encouraging others to break the law, and promoting violence or “hatred” towards others. 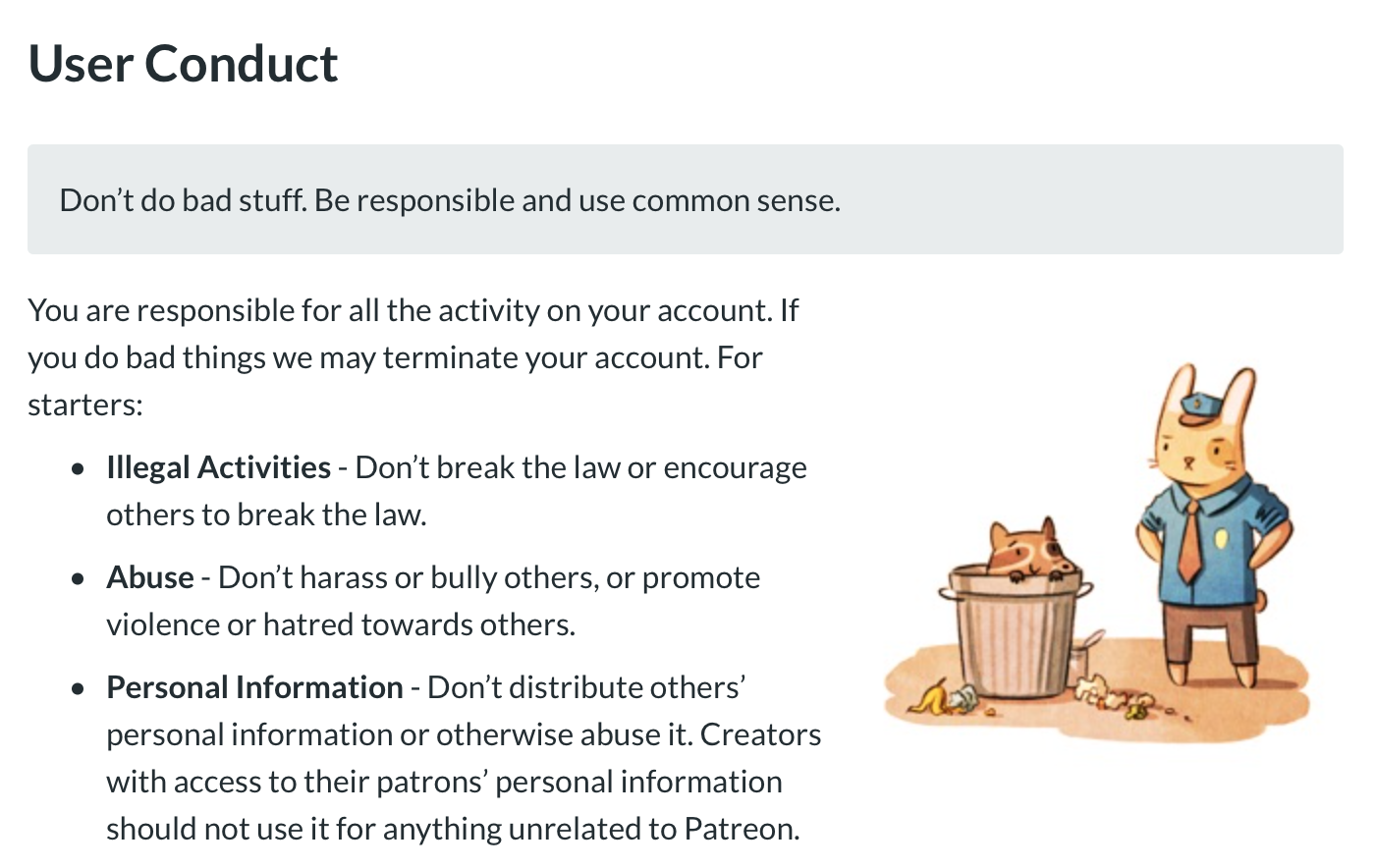 For the most part, promotion of or participation in violence is typically not ambiguous, while “hate” on the other hand is broadly interpreted by many people to mean different things. Those working at Patreon as well as at most other crowdfunding websites have interpreted “hate” to mean, among other things, those who advocate for the interests of European people. Many libertarians and conservatives would claim it is Patreon’s “right” as a company to discriminate in this manner and that we should simply create our own crowdfunding business if we do not like their policy.

The issue, however, seems to not only be with companies such as Patreon, but also with the payment processors that these companies rely on and the Payment Card Associations or PCA’s that have monopolized accreditation for payment processing companies. I will touch on this more in the near future since this is an injustice that must be revealed to the general public, but for now, it is important to understand that it is simply not possible to create an alternative that will not be denied access to the tools required for operating.

So far, there have been a few successful, but highly limited attempts to subvert the monopoly. One company, Wesearcher, has managed in some extraordinary cases to help those who have been denied access by other platforms to raise funding for lawsuits and medical bills. However, Wesearcher began and remains primarily a means of crowdsourcing research, not a platform for those who are seeking to solicit capital from patrons for non-research related issues. This means that the average individual whose political views border on modern crimethink still do not have access to a digital platform that will put them in touch with donors.

Why this matters is because political dissidents seeking change through peaceful means are denied access to resources while their very opponents who are actively engaging in political violence (a.k.a. terrorism) towards them have open access to crowdfunding platforms like Patreon that they use to promote anti-White hatred. Just last week, the popular Alt-Right blogger and mother of 6, Wife With A Purpose,  had her Patreon account shut down for violating their “hate speech” rules. Advocating for having more children is now considered unacceptable…go figure.

While Patreon is busy protecting the general public from the traditionalism of White housewives, violent anarcho-terrorist organizations like It’s Going Down (IGD) have open access to their platform to raise funds for violent activities. At this time, there is not another organization that this author could find that is actively violating Patreon’s TOS to a greater degree than IGD. Just several weeks ago, IGD was bragging about their affiliates tracking down and assaulting a Proud Boy member as he left a bar in Madison, Wisconsin. IGD also has a long history of malicious doxing, that includes members of my own family (and this was long before the legacy media lied about my altercation with Moldylocks). They are also directly involved with disrupting free speech events to not allow civilized exchange of ideas and reveled in their members violently attacking people protesting the removal of a statue in New Orleans. And if all this wasn’t damning enough, they have openly bragged about sabotaging railroad tracks by pouring concrete on the train tracks, a stunt that could have killed countless people and caused tens of millions in damage.

One look at the promo for IGD should give any normal person pause. Their promotional video displays anarcho-terrorists affiliated with IGD rioting clad in all black attire with masks covering their faces to conceal themselves from being identified for the crimes they are committing. The narrator claims “they are proud of the work they have done” while video of anarcho-terrorists graffitiing a car and smashing out windows of storefronts at the riots that occurred in DC earlier this year during the presidential inauguration.

If Patreon is attempting to market itself as a socially conscious corporation, they aren’t fooling anyone. The hypocrisy has been an ongoing trend for years amongst tech companies whose corporate culture shuns thought diversity and creates hostility towards those who disagree with their Cultural Marxist groupthink. This vacuum is undoubtedly responsible for the double standard in the interpretation of Patreon’s TOS.

I’m over watching this blatant hypocrisy and simply complaining about it. Institutions such as Patreon will only change when we hold their feet to the fire. Perhaps it’s time we do just that.

the authorNathan Damigo
Nathan Damigo is a combat veteran of the Iraq war currently studying for an undergraduate degree in social science at California State University, Stanislaus. In March 2016 he created Identity Evropa, a North American based Identitarian organization dedicated to creating a better future for People of European Heritage. His activities as an activist have been covered by national and international media agencies such as CNN, BBC, Time Magazine, Rolling stone, The Young Turks, The New York Times, and many more. He currently writes as a contributor for altright.com.
All posts byNathan Damigo