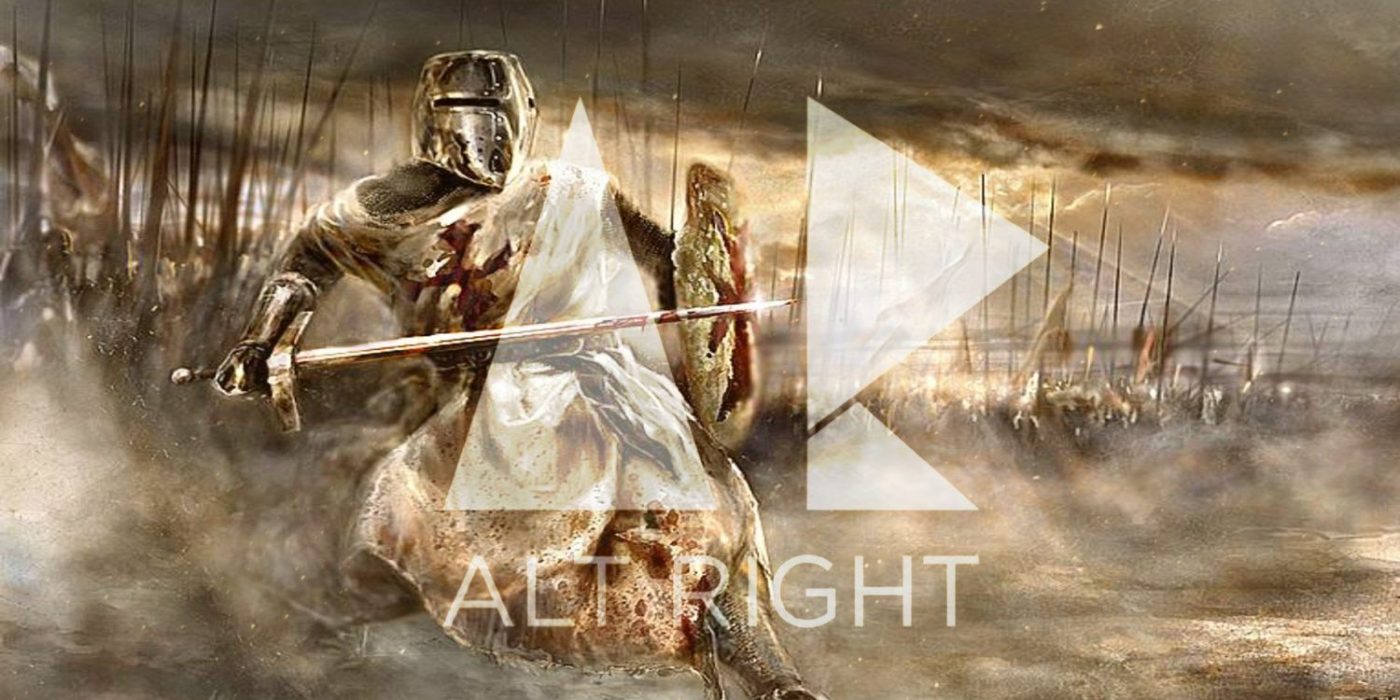 In Defense of A Masculine Movement

A weak leader can only recruit weak men.

In the event any of you have noticed the ongoing crusade against me from Greg Johnson and his crew over at Counter-Currents, here is my brief response.

At The Right Stuff’s forums, Greg called me a “sociopath,” “mentally ill,” “alcoholic,” a “womanizer,” and accused me of collaborating with antifa, then confidently declared that the “movement could not become one big happy family again” until Arktos and I were expelled. Never mind the small detail that he had no evidence to back up these accusations: just take his word for it!

He’s since followed up his histrionics by browbeating some of the cucks in his stable into penning follow-up 5000-word essays about what a horrible man I am (four in a row, without any response from me in between, to be exact — two of which have headlines containing the word “truth”, which ought to make anyone suspicious). Latest out is John Morgan’s fairy tale about what a poor oppressed idealist he is and what a mean boss I was to him, actually having him run errands while being employed by me, while I supposedly spent my time partying in my luxurious apartment — that is, when I was not busy translating O’Meara’s New Culture, New Right into Swedish, writing my own book The Real Right Returns, editing other Swedish books, organizing conferences and giving speeches and interviews more times than I can count. Such is the level of Greg’s insecurity that he needs to pressure people around him to publicly take his side against me.

I could have easily done the same. I could have asked Richard Spencer to write a long article praising my twenty years of contributions to the movement and expressing his support for me. I could have also asked my Swedish colleague, Nordic Alt-Right President Christoffer Dulny, to write something in my defense about how the supposed “sabotage” and “doxing” against the Scandza Forum is a fantasy unsupported by any evidence and that, on the contrary, we helped Scandza guests with lodging and congratulated them on a successful conference afterwards. I could have asked any of the other real men in our circles to come forth in my defense.

But I don’t need to do any of that. I am perfectly able to defend myself.

And since most of the contents in Greg’s and John’s articles consist of petty slander I will just focus on the main accusations and ignore the rest.

Not true and completely unsubstantiated. This has already been briefly refuted above, and I also received this statement from one of the Scandza recruiters who happens to be a friend of mine, Omar Filmersson, which he told me I could publish. After what I can only assume is severe pressure from Greg he 24 hours later asked me not to publish it. I will however publish it anyway, and I assume this will settle this particular matter once and for all:

“Since my statement on Counter-Currents, June 22, where I made the uneasy decision to support my observations with excerpts from a private text conversation, I have been asked to clarify whether I saw actual proof of adverse actions taken against the conference in Stockholm.

As I want to be as accurate and fair as possible: The indication I saw that would suggest that the initial talk of boycott (originally brought up in the mentioned text conversation) was later turned into action was a statement (not by Daniel Friberg) encouraging others to demand their money back from the Forum organizer if they did not change the decision to not invite Daniel Friberg. That statement was published about an hour after the 22.00 deadline, May 16, in the Facebook group for the Nordic AltRight.

From my position as a recruiter I had no other first-hand experience of any actions taken that were hostile to the event.

In this context it may be helpful to quote from a comment I made to my original statement: “[…] [T]he degree to which I support or legitimize statements or perceptions is strictly limited to what I have disclosed in this account (the title is editorial). My purpose for writing the text was to end ongoing speculations (which were damaging people) where only I had first-hand information. […]”

2) “Collaboration with the antifa”

This malicious rumor is also unsubstantiated with evidence. The only “proof” of this claim is two photos of me and former antifa leader Mathias Wåg that I took when infiltrating and doxing the leftists at a nationalist rally in Stockholm on January 30, 2016. At great personal risk, I might add — as I almost got into a fist fight with a close associate of Wåg who was filming nationalists for doxing purposes, before the police intervened. Afterwards I posted photos of several leading leftists on Twitter, including Wåg. Greg knows this, since it has been pointed out whenever he has brought it up in the TRS forum as well as various Facebook groups. That does not prevent him from maintaining this lie and illustrating every article at CC about me with said photos, pushing the narrative that I am some sort of friend of antifa.

John and Greg have both accused me of embezzling money from what is effectively my own company, Arktos Media Ltd., of which I’m also the CEO. This has been refuted by me and my colleagues, and considering John Morgan had access to not only our accountant (who obviously had access to our full accounts) and lawyer, who is a close friend of his, and the fact that the initial blackmail-styled letter threatened with both reporting me to the police authorities and filing a lawsuit, no such thing has happened. Where is the evidence of such a grave accusation? And if they didn’t want to spend money on a lawsuit, why have they not reported me to the police — a very simple and straightforward matter that would not cost them anything — considering embezzlement is a criminal offense? I urge them to either present the evidence and report me to the police — or stop pushing this unsubstantiated lie.

When we founded and registered Arktos Media Ltd. in November 2009, it was meant to serve as a distribution company rather than a publishing company, maintaining our two separate entities (my own “Nordic Publishing” and the two other co-founders’ “Integral Tradition Publishing”). It was only a while later that I pushed for the idea of total integration, effectively resulting in Arktos purchasing the stock and some book rights from Nordic Publishing as well as the stock and book rights from ITP, all paid for with Arktos shares.

The two owners of ITP added the condition that we transfer John’s employment contract to Arktos as part of this transaction — something my Swedish colleague and I agreed to. It is true that he was one of our first employees, and effectively with us from the start, but he was neither a co-founder nor a shareholder (until a year later, when he received a small share bonus on top of his salary). It is also true that John did a terrible job in terms of productivity for as long as he worked for us, and consistently missed deadlines throughout his entire employment, and he was threatened with termination twice before I finally had enough and let him go. In order to get him to tie up loose ends and finish the long overdue manuscript he was working on, as well as facilitate a seamless transition to our new Editor-in-Chief, Jason Reza Jorjani, I later rehired him as a project-based editor (just like our over ten other project-based editors).

But it needs to be repeated that John Morgan 1) was never a “co-founder”, 2) was indeed fired for not doing his job sufficiently (which could be substantiated with screen shots of our conversations if he persists in denying this, although I am hesitant to stoop to the level of publishing private correspondence), and 3) immediately went working for Counter-Currents afterwards, where he is currently a shareholder and Greg’s second in command. And since most of Greg’s accusations against me are derived from hearsay told to him by John Morgan, it is obvious that I am dealing with a disgruntled former employee wanting to “stick it to the man” by defaming my character with the help from Greg.

5) Greg’s role in the attempted coup against Arktos

In our article, “The Attacks On Arktos”, we never accused Greg of trying to take over or sabotage Arktos. We simply point to the things we know. For example, shortly after it became clear that the rest of the management and I had regained complete control of our company and that there was no way forward to remove me, Greg sent me a buy-out offer. I find that a bit too convenient to be a coincidence, but what do I know. The bottom-line is that we leave it up to the reader to decide instead of making claims we can’t fully back up with evidence.

As Omar Filmersson’s piece over at Counter-Currents (archive) states, it was Greg Johnson all along who initiated this conflict by attempting to get me disinvited from the Scandza Forum (though he denied it). Since then we have stated our side of the story and were hoping to leave it at that. However, some people wish to keep the flame war going.

Greg may have started all of this drama but I intend to put an end to this once and for all. Greg has done many great things at Counter-Currents over the years. However, our movement does not have the time to waste reading 5000 word screeds full of baseless allegations and petty name-calling. I will not indulge them further than this brief comment, and will henceforth disregard all slander from them and focus on more constructive work, with Arktos, my upcoming book and to keep building the international Alt-Right infrastructure together with my friends and colleagues in the Nordic Alt-Right and AltRight Corporation.

We need tough men to deal with the conflicts ahead that await our people. For us to become a movement capable of defending our civilization, we need masculine leadership, and we need to get rid of the passive-aggressive castrati trying to pose as our leaders. If we can’t do this, we are truly doomed. The choice is yours.