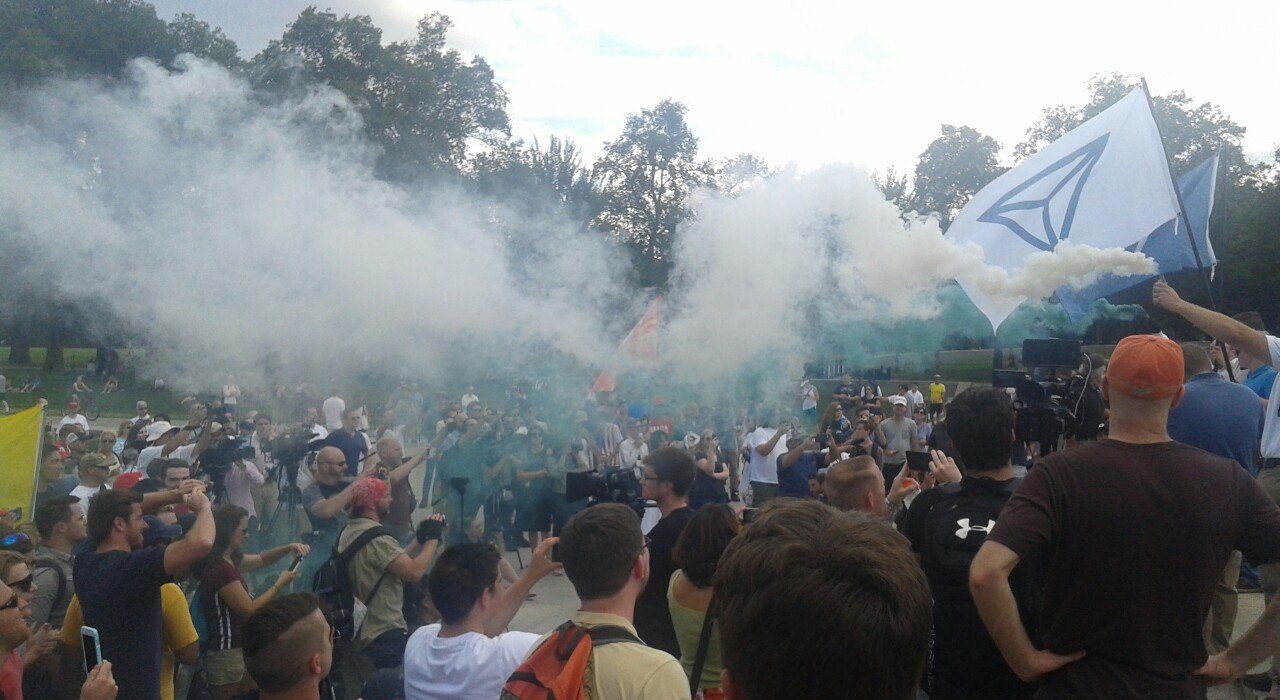 The Alt-Right smoked them out.

Last Sunday, June 25 around 200 people converged on the lower steps of the Lincoln Memorial in Washington D.C. to attend the Rally for Free Speech. Its organizer announced his intent to, “aggressively defend [free speech] this most sacred and inalienable right” that has “been under attack for too long.” The rally, planned many weeks in advance, was a defiant statement against the growing threat of anti-free speech sentiment on campuses and left-wing terrorism in the U.S. from groups such as antifa, By Any Means Necessary (BAMN), and radicalized Bernie Bros.

Once broadly praised by many on the right, the rally became the center of controversy when Richard Spencer was invited to speak. This prompted several speakers and guests to drop out including Lucian Wintrich, Jack Posobiec, Cassandra Fairbanks, and Laura Loomer. The dropouts objected to sharing a stage with explicitly pro-White speakers and attempted to hold their own “Rally Against Political Violence”. Although this author did not attend the competing event, it’s clear from photos posted to social media that the Civic Nationalists of the “New Right” were out in full force.

This group included Jews, mixed-race couples with their offspring, cultural libertarians, minorities who voted for Trump, boomers, and generally anyone uncomfortable with the realities of race.

The Rally for Free Speech kicked off in a dramatic fashion. Tourists, many foreign, watched in excited confusion as members of Identity Evropa, marching in the White bloc, descended the steps shortly after noon. To the backdrop of many flags including that of the U.S.A, the Gadsden flag, the flag of the Army of Northern Virginia, and the Dragon’s Eye of Identity Evropa.

First up was YouTuber and America-first advocate James Allsup, who thanked everyone for attending. Allsup did not hesitate to call out the “fake right” for holding their own rally at the same time in an attempt to delegitimize the Rally for Free Speech. Another speaker, Augustus Invictus urged the right to unite as he recounted the infighting that led to the destruction of the Libertarian Party of Florida. Christopher Cantwell remarked heatedly on the irony of holding a free speech rally at the feet of Lincoln, the great divider, and suspender of freedom of the press. Mike Enoch of The Right Stuff, used his platform and delivered a warranted tirade against Jewish influence in American politics and culture. Latina for Trump Irma Hinojosa, ignoring calls from the New Right to drop, spoke about her obligation to help Hispanic immigrants assimilate. Her reception was understandably lukewarm.

Identity Evropa founder Nathan Damigo urged Europeans to band together to protect their culture, heritage, and homelands and later lead the crowd with a “Moldylocks!” chant. Finally, Richard Spencer rounded out the rally with a lesson about the “real meaning” of free speech and the “black cloud” that hangs over White people.

Many attendees were from Identity Evropa or Vanguard America. Others were locals and a few were sympathetic tourists. There were far fewer females than males in the crowd. One very attractive young lady in a pink dress was sporting a sign that read “Deport Islam” and featured a rendition of Mohammed with a lit fuse protruding from his head alluding to the rather explosive tendency for his worshipers to commit violence.

A group Midwestern tourists were extremely receptive to her sign. One Asian cyclist, after nearly knocking her over exclaimed, “So sorry! So sorry! Make America great again!” Another Chinese tourist told her he hated Muslims and hoped Trump would contract Chinese laborers to build the wall like they did the intercontinental railroad. At one point a someone wandered over to the speakers and held up signs in both English and Hebrew that read “Jews for Trump!” This author suspects lunacy but it’s not confirmed if this was an attempt to troll.

Detractors were few. One (presumably ham) sandwich was thrown, and only two visible scuffles broke out but were quickly ended by police. At one point, an enraged and hygienically-challenged protester descended the steps screaming obscenities. Its cries were soon drowned out by the crowd’s chants of “take a shower!” The rally was protested by about forty low-energy, run of the mill liberals at the top of the steps. The two groups were separated by multiple rows of metal barriers and they did not interact. Protestors had drums and smelled of patchouli. Notably absent was Antifa whose Facebook presence suggested it would turn out en masse. The only Antifa protesters seen Sunday were Muslim-rape survivor Lacy MacAuley and a handful of her merry henchmen outside the DCPD police station. Sad!

All in all, it’s safe to say the White man marches on. Thanks to everyone who came!