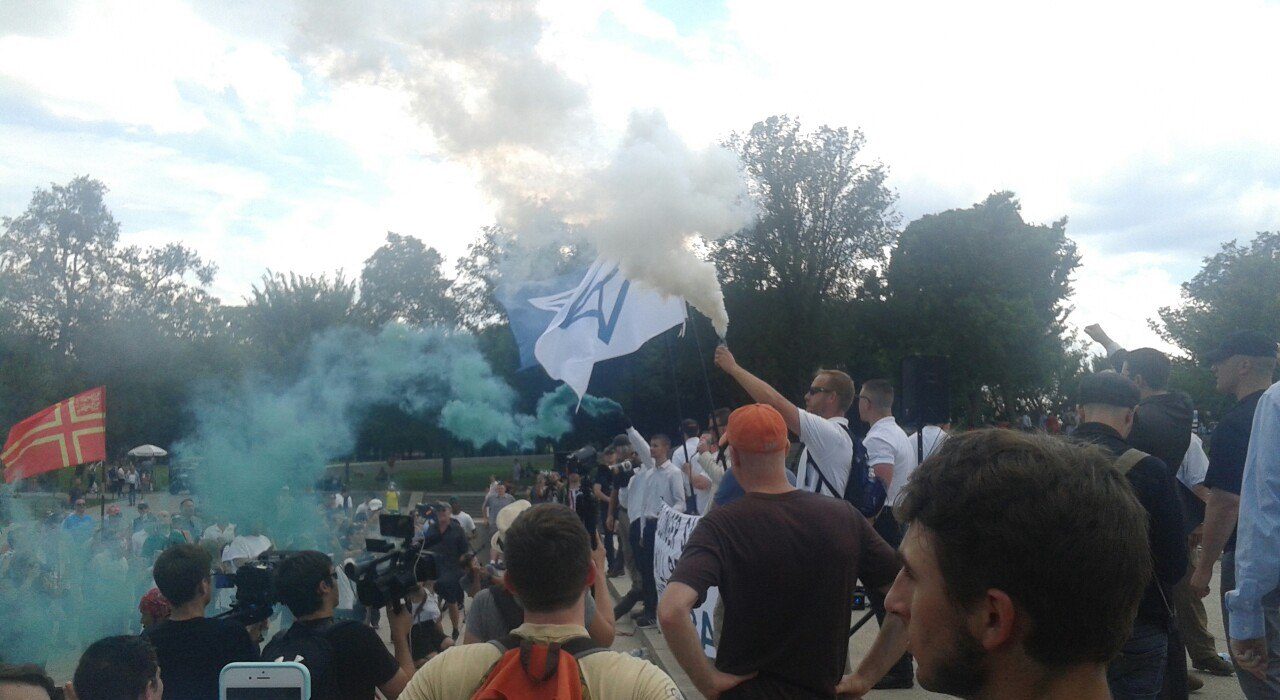 We're not tired of winning yet.

The Alt-Right came out in force on the steps of the Lincoln Memorial.

Mike had a very powerful speech. He spoke about what Diversity really means for White people. Nathan spoke about the importance of responsibility and using one’s freedom, not just ceaselessly advocating for more and more freedom. Richard spoke about the dynamic growth of the movement and ended the rally on a rousing note:

Baked Alaska also gave a speech from the perspective of a recent convert. He made the point that for some reason faux-nationalists felt that they should have their rights to criticize Muslims respected by the US Constitution, but that they believed that any criticism of the Jews should not be allowed. He held them to task for this ridiculous double-standard. All in all, for his first major speech, it was an impressive show.

There were other speakers as well, and you can listen to them all here.

Meanwhile, I took the opportunity to snoop around. There were other groups in attendance.

The Alt-Lite was NOT in attendence. They decided to branch off and hold their own “free speech rally”. It was a complete flop. Our side came out in greater numbers, and with a powerful message, they did not. More on the “controversy” here.

Antifa and the Counter-Protestors

Antifa was a no-show. Some left-wingers showed up to counter-protest. They were mostly college-aged Whites with nu-male physiques and/or not straight. There were some shrill White women with dyke hair and tats as well. And there were the token minorities that were dating these crazy bitches.

I had a chat with one of the guys who seemed like the most normal guy there. I asked if he was with BAMN or Antifa or part of some other similar organization. He said he wasn’t and that he was with some No Borders movement. He also said he was a socialist. 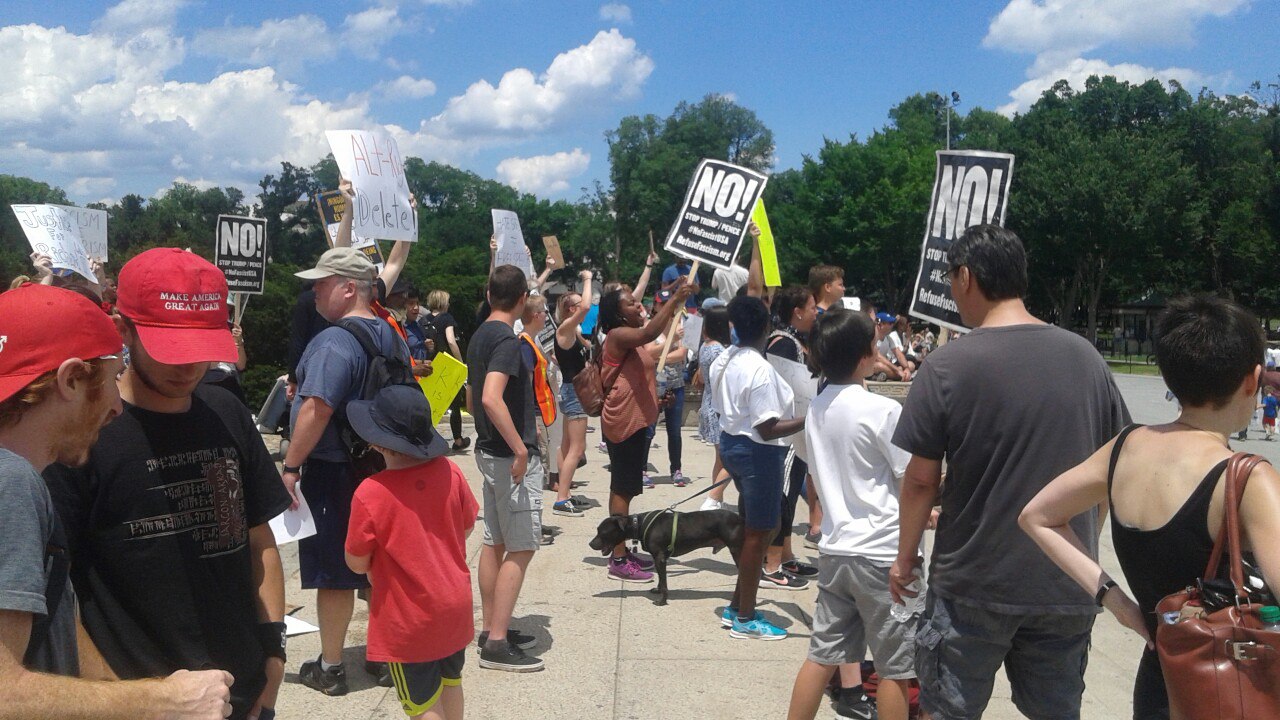 He was very polite and was able to hold a conversation with me about his take on current affairs. To my surprise, I found out that he was WOKE about many issues. He was aware of the JQ, even though he preferred to refer to them as Zionists. 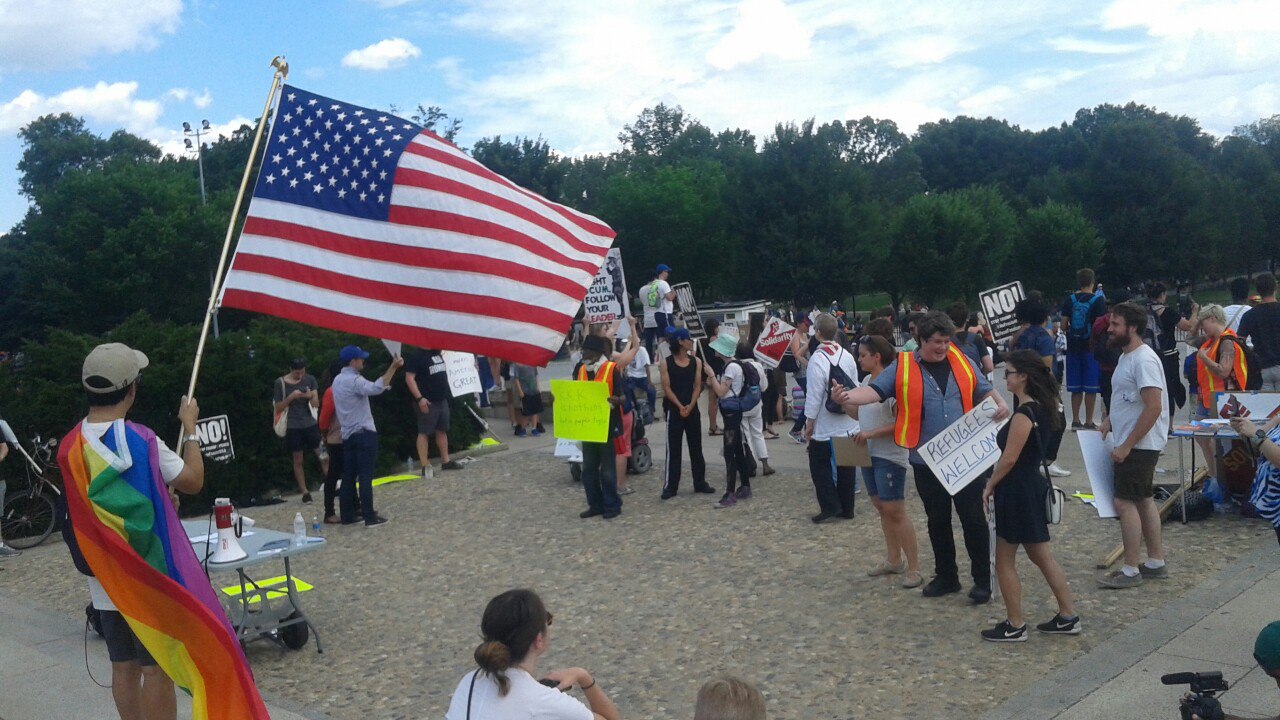 It turns out that we both had attended Occupy back in the day. I told him that I had become red-pilled when I realized that the 1% I was protesting was predominantly Jewish. He didn’t have a rebuttal and seemed to accept that point. He even added on that he believed powerful Jewish families had disproportionate control over the West. He leaned in conspiratorily:

Let me tell you about the Rothschilds…

I wanted to break out laughing. I was pleasantly surprised to find that some of these veteran lefties were aware of these issues. The only problem was when he started to talk about how this was all part and parcel of White Supremacy. He seemed to be under the impression that Jews were White. I emphatically informed him that they were not, and that they seemed to have it in for White society, but he didn’t seem convinced.

I came away from that encounter with new ideas about key propaganda points that the Alt-Right will have to push. We found common ground on anti-Globalism, anti-Zionism, anti-Big Business. But the racial self-hatred remained. He saw the immigrants pouring into White countries as his brothers in the struggle against Capitalism.

It is hard to argue with such reckless cuckery.

I wandered over to the Kekistanis next. They had shown up to the rally but kept their distance on the periphery. They welcomed me politely though.

I told them about my amusing encounter with the Socialist and I crowed about how we were able to find common ground on several issues. They stiffened when I started talking about the whole Jewish thing.

We’re not about that…

In fact, they weren’t about anything really. They had no beliefs about anything other than free speech and “freedom”. Yes, they were for freedom and weren’t really able to articulate more than that. I asked if they were from /pol/. They shook their heads emphatically. No, they didn’t like /pol/.

They were all Redditors.

In fact, they didn’t seem to understand that the flag they were flying was a Kriegsmarine variation cooked up by /pol/ as a not so subtle trolling effort. 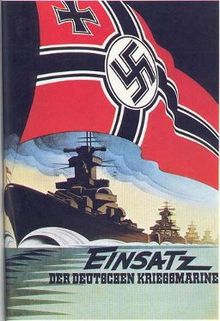 They were all dressed eccentrically and came off as very strange. They also had 2 non-Whites with them. One of them looked like a Filipino and he had massive gauges in his ears. Another one of them had a Sargon of Akkad shirt on.

I also walked around and asked tourists what they thought of the rally. Most had absolutely no clue what was going on and kept their distance. Others were more confrontational.

A Mexican man ran up to the rally and yelled out that he wasn’t going to leave the United States no matter what Nathan Damigo had to say.

Another older man recognized the Kekistani flag- that is he recognized the Kriegsmarine flag- and he thought that they were neo-Nazis. He said that the organizers of the rally should distance themselves from those green-flag wavers.

Two black/hispanic mixed looking men wearing rasta-themed clothing threw a pepsi can into the rally as it ended and then sauntered off. 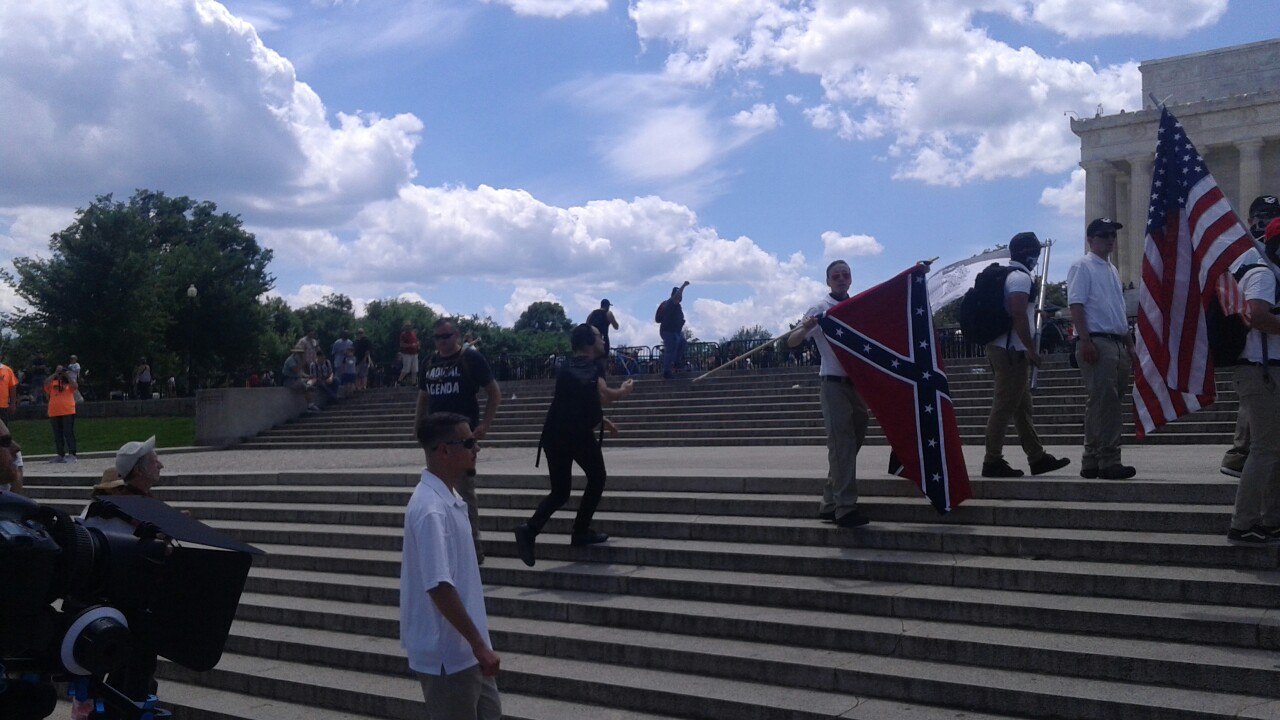 Some crazy white women showed up with their black boyfriends to taunt the rally. They looked like complete trash and they were mostly boomer women.

An obese white family with a white daughter and a coal-black son showed up as well. They were just tourists, but they made a point of clucking their disapproval of the rally as they shlubbed on by.

A Jew even showed up, and tried to sell “Jews for Trump” signs. 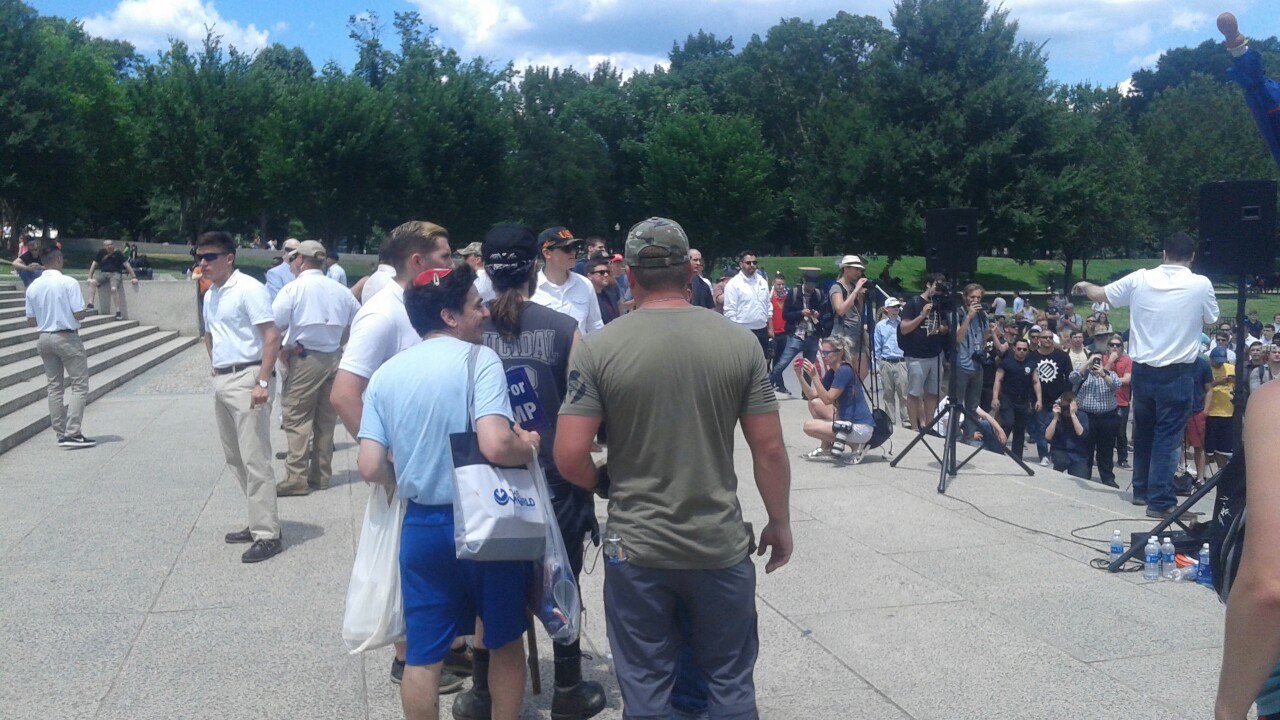 I spent a lot of time talking to IE guys who were the bulk of the rally. Other groups like American Vanguard and Traditional Workers Party showed up as well, but IE was really out in force. They had their White Bloc polo uniform on and they looked impressive. I had a word with one of their main organizers, Ajax.

He explained that the organization was doing its best to reach out to college men who feel alienated by the hostile climate on campus. Identity Evropa makes it their mission to support these young men and to foster camaraderie among the ranks. Ajax bragged about the phenomenal success that IE had had in recent months.

The organization has really taken off. 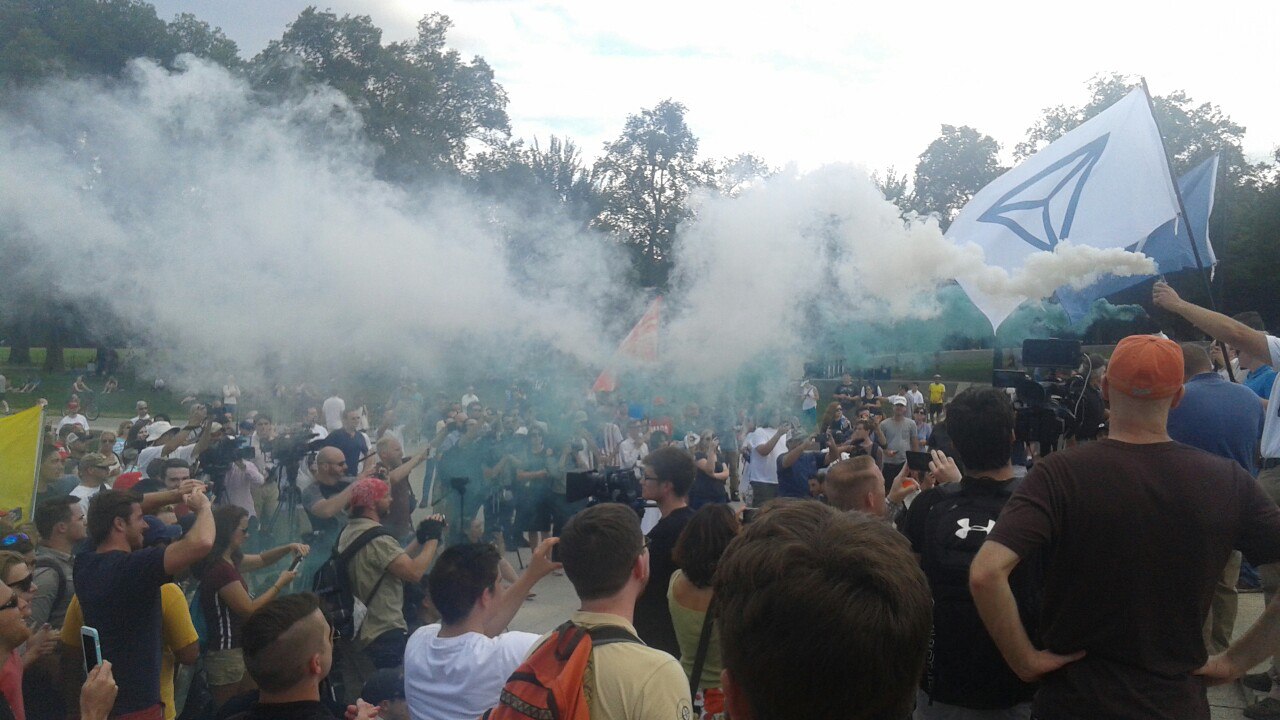 I asked why they recruited from places like Berkeley or on college campuses in general. It seems counter-productive after all. Why go into the den of the enemy and try to recruit there?

Ajax explained that it was exactly in these hostile environments where they had the most success. The Left lets the mask drop on campus and bares its teeth against all White men in ways that it doesn’t off campus. Furthermore, in conservative red states in the heartland, people are somewhat insulated from the craziness going on in big coastal cities and college campuses. The older conservadads who form the red state electorate don’t feel the need to engage in identity politics because they don’t experience the POZ as badly as younger generations or Whites working and living in cities. 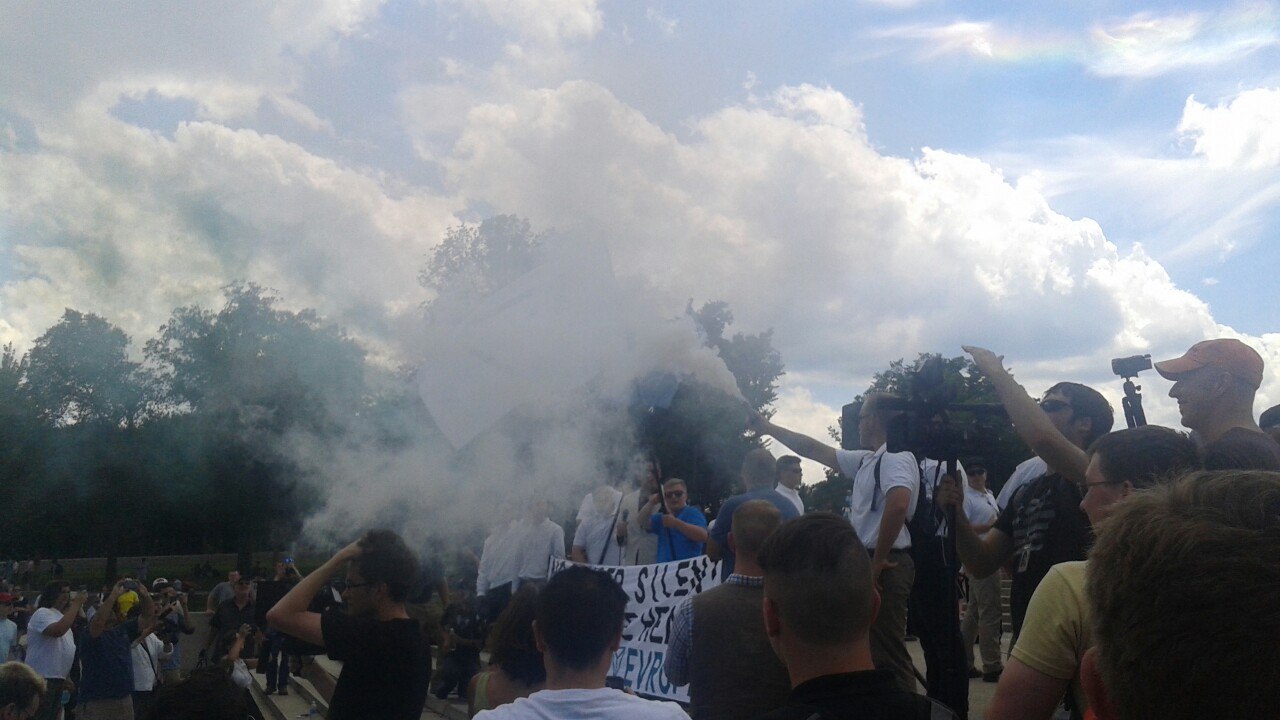 In short, IE has found an incredible niche where they grow stronger as the Left gets crazier. Good on them.

We continue to grow as a movement in both size and professionality. It is amazing what the Alt-Right has been able to accomplish on a shoe-string budget. Meanwhile, we have outstripped and out-performed the Alt-Lite, which really should be called the Fake Right seeing as it is led by hustlers and charlatans.

Antifa is cowed. They don’t even show up anymore because we are no longer soft targets. I hesitate to proclaim victory just yet, but they have all slunk away into the college dorms, for now, making organization on the East Coast much easier and allowing us to step up all of our activities and our events.

We have a lot more planned for this summer, so stay tuned. This year and every year onwards belongs to us.