GamerGate is often tied to the Alt-Right but that tie is tenuous at best- still SJWism in gaming is a cancer that must be removed.

In case you are one of those people that have a life, a family, goes to the gym regularly, reads books or pretty much anything else that isn’t playing video games and following gaming news, let me inform you that GamerGate1.5.0 just dropped.

I’ve been toying with writing a kind of fun article discussing whether Europa Universalis IV or Hearts of Iron IV (which has a Taylor Swift Aryan Goddess mod) is the official game of the Alt-Right, but it seemed a little out of place on AltRight.com. I’ve also been thinking about writing a piece explaining the relationship (or lack thereof) between the Alt-Right and GamerGate. But there always seemed to be something more important. However, there do seem to be a lot of Altrighters who are also gamers so maybe an article about diversity and multiculturalism in gaming will find an audience. Oh and by the way, I hear there was recently a social justice oriented panel dedicated to moving beyond cis het white straight ablest males as the default. No joke. (Photo stolen from /pol/). 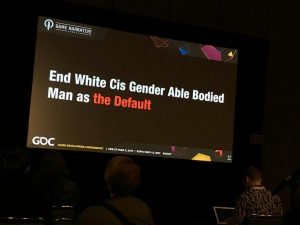 But what happened to spark my attention? There is a game developer named Tim Soret who works at Raw Fury Games and is developing a post-cyberpunk dystopia called The Last Night which was just announced at E3.

A woman you may have heard of named Zoe Quinn, decided to get her name in the press again, and stirred the pot. That led to the SJW brigade going back and looking up everything Soret had ever said. The thought police went through his Twitter from three years ago to find out if he had ever committed WrongThink. And as it turns out, yes he has. They discovered old tweets where he made regarding GamerGate, feminism, and equality.

Soret didn’t say anything particularly nasty. He wasn’t issuing death threats to women or vowing to portray blacks in games as banana eating rapists. So what was his thought crime?

And on top of that, he has committed the crime of portraying The Last Night as a socialist utopia where place where people struggle to find meaning in their lives. According to the game’s Steam page,

“…people struggle to find their calling or identity, and define themselves by what they consume, rather than what they create.”

Yea, the horrible crime of pointing out that a socialist utopia isn’t what their Marxist professors told them it would be. People might still have problems even with a Zuckerbergian minimum basic income, universal healthcare, and other free shit without talking about how you provide it. The game doesn’t seem to have a specific comment on politics at all, and I can’t tell beyond a reasonable doubt where Soret’s political loyalties rest. But that doesn’t matter to the SJWs. Soret is a heretic who once said something nice about GamerGate and thus he must be harassed until he quits the industry or until he is ostracized.

That’s just how it works in the current year. The left hated corporations until the advent of corporate social responsibility, a business school code word for bowing to left-wing political agendas.

Soret and Raw Fury did what companies always do when the Social Justice brigade demands a new sacrifice, they cucked. And Soret himself actually apologized onstage for the tweets. 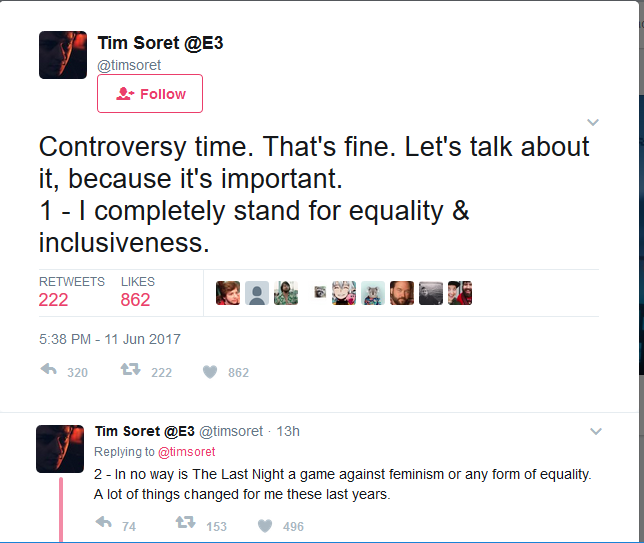 He completely stands for inclusiveness and equality you guys!

That’s not going to get the SJWs to back off. It never works. The only way to deal with those people is to challenge them to develop a game, I mean besides something like Depression Quest. You could also challenge them to do something besides beg for money on Patreon as well, but good luck with that.

Though on the bright side actual gamers and some uncucked developers seem to be having a good laugh at the expense of the left.

Oh and don’t forget guys, the retards at Mic and Motherboard are telling us to be pumped about Wolfenstein 2 a game that literally no gamer I know, left, right or libertarian, has been anticipating. But you know, we’re supposed to be raving about it because it has a strong black woman and you get to kill Nazis.

When will the gaming industry realize that “Nazis” – ie White men and boys are their biggest consumer demographic and stop doing everything in their power to spite them?