Our Vision For AltRight.com

Help AltRight.com become a Breitbart for the age to come, not the one that has passed.

For AltRight.com to fulfill its potential, we need your support.

Help us become an essential organ in the international Alt-Right—a Breitbart for the age to come, not the one that has passed.

Our goal for the summer is to raise $50,000, which would be a tremendous start in professionalizing our operation: hiring more salaried news writers, producing more writing, podcasts, and videos, and securing a dedicated server.

Now More Than Ever

So . . . Trump has cucked: The Wall is stalled . . . the strikes on Syria were stupid . . . more refugees flood into America than ever before . . . illegals are not even being deported . . . Trump’s political agenda is incoherent and “conservative” in the worst sense of the word.

Of course, it’s not all his fault, and, of course, he is under intense pressure from the existing power structure. But the reality is that Trump’s presidency seems more like what we would have gotten from Mitt Romney, or even Jeb Bush, than anything expected from a “God Emperor.”

In other news, Breitbart—the publication that embodied the Trump Revolution—fired an employee for tweeting something obviously true about Muslims. Apparently, the default setting of “Conservatism”—purge any and all authentically nationalist voices—has been reactivated.

I don’t say any of this as a Black Pill, for despite my 2016 exuberance, I always viewed Trump as a means, not an end . . . as the first step towards something greater, never as a last chance to piece together a multiracial America and save the system from itself.

And the real story is the rise of the Alt-Right.

The Alt-Right doesn’t start with “freedom and tax cuts,” and it is anything but a Trump cheerleading squad and or a “young and hip” version of the same old bullshit.

The Alt-Right starts with identity—the racial, historical, and ideal core of what it means to be European. This, in itself, is a revolutionary act. And despite the fact that we don’t get Soros money—or even Rebel Media money—we have a tremendous impact on the public.

And the disappointment of Trump—and the increasing irrelevance of Breitbart—only reenforces why a real Alt-Right must exist.

So let’s step back and look at what’s happened, and how far we’ve come.

I can remember giving a speech at Providence College in 2010 . It was attended by a couple dozen people, and a handful of squealing antifa. It was fun and worthwhile, but the event hardly made news.

Today, when we go to places like Texas A&M, Auburn, or the University of Virginia, the campus shakes. Hundreds, then thousands, come out . . . protests mounts . . . we trend on Twitter . . . the world is triggered . . . our ideas reach more people than ever before. 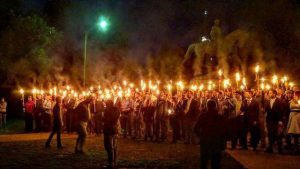 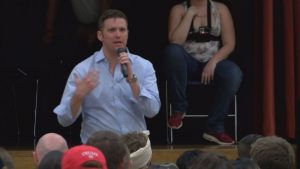 The fact is, even the seemingly “bad” things, like the “Hail Trump!” controversy last November and my being assaulted by antifa in Washington (“the punch heard ‘round the world”), have ultimately been good. Through meme magic, each media storm brought Alt-Right ideas to millions. (I’ve actually talked to a number of people who once shared images of me getting punched . . . then became “Alt-curious” . . . and now are Alt-Right!) Moreover, the way we responded to these wild events was what really counted: We stood our ground. We did not cuck. We weren’t afraid of who we are. Crises reveal character.

Put simply, if you’re not being attacked by the Establishment, you’re not doing anything that matters. And a rise in influence and popularity will invariably be accompanied by controversies, assaults, and petty sniping. Put simply, if they’re not fighting you, you’re doing it wrong.

As Rolling Stone reported last fall, we are being “radically mainstream”—breaking into public consciousness without losing ourselves or compromising what we believe.

Conscious European identity—and a real identity politics—must materialize around leaders. And these leaders will be hated. If we can bear the burden of being villains, we will become heroes.

Moreover, the Alt-Right name has become a symbol for something bigger than our movement, maybe even bigger than White identity itself. It stands for a radical alternative to the system—the insistence that another world is possible.

Long before Trump, the Alt-Right (even if our movement didn’t yet have that name) was alive and kicking. It functioned, effectively, as a collection of one-man, niche operations . . . lone dissident voices outside the mainstream.

The work done by these men over the past 25 years has been remarkable and, indeed, indispensable for where we are today.

AltRight.com was dreamed up in a New York City bistro, where a friend (the writer “Hannibal Bateman”) and I were treated to a Persian meal by Jason Jorjani. There, we expressed our frustrations regarding institution-building and the difficulty of collaboration. Our solution was to form a new body, which brought together the essential people in the Alt-Right, and those who wanted more.

The AltRight.com Board of Directors is the team of intellectual entrepreneurs who will be setting the tone for the movement for the next quarter century, at least.

Every Board Member is open, full-time, and totally dedicated. In other words, we’ve taken on the burden of leadership, and all the slings and arrows that entails. We are building the institutions that our movement needs. We are ready to win.

Our vision for AltRight.com is not as a niche or single-issue site. It is as the Bretibart of the future. A site that is “radically mainstream”— that will feature news writing and breaking opinion that’s fun and timely, as well as the bigger, deeper “think pieces” that define our ideology.

The Alt-Right seeks influence, and Breitbart proved how a news site could influence an election. We, of course, aren’t interested in electing just another Republican; we seek a more profound, generational change—a change that’s cultural, not merely political. “Alt-Right” has become a global brand, one that’s bigger than any one writer or activist. AltRight.com will be the centerpiece of our movement.

The creation of Nordic.AltRight.com, a sister site sharing our URL—which, we hope, will be followed by similar sites for other European languages and regions—demonstrates the extent of our ambitions.

The following are the components, as we see them, our what our media project needs to change the world.

We are working with a full-time news writer and editor, Vincent Law, who keeps the site lively and up-to-date. He is being compensated, but not at a level commensurate with writers at sites like Breitbart or The Daily Caller. We want him operating at full capacity, and we want to hire additional news writers, as well. We’ve already selected these writers, who are prepared to go full-time if we can approximate their current “wage-cucking” salaries. People like Gregory Hood—who write the powerful, think pieces—need to be professionalized, as weekly columnists, who are compensated as such.

We were recently “no-platformed” by Soundcloud, the largest social network for music and podcasts. We also had our YouTube monetization removed (which means that our videos and podcasts can go up on the site, but generate no ad revenue.) We are in the process of rebuilding the AltRight Radio feed, which will include the 150 podcasts I did with RADIX and all of my classic conversations with Jonathan Bowden.

Our goal is a weekly count of 2-5 new podcasts, many of which will feature me: Alt-Right Politics, Counter-Signal With Richard Spencer, Eurocentric with Daniel Friberg, and my new pop culture podcast with Mark Brahmin, Unconscious Cinema.

Public appearances make international news. Our Charlottesville event (a collaboration with Identity Evropa and other activists) was reported on by media, not just in the U.S., but as far afield as Europe and South America.

This April, when I took my college tour to Auburn University, we faced serious opposition from the university itself, which cancelled our event due to “safety concerns.” I stood firm—as did the whole Alt-Right, who came out in force! With the help of noted attorney Sam Dickson, we took the university to federal Court and won, earning a restraining order against the university and setting a major legal precedent for events in the future.

In other words, we were challenged . . .

AltRight.com has co-sponsored all my events. We need to do even more of these in the future.

Unquestionably, YouTube is the most important medium of our age. And we are making a splash, with both my timely commentaries as well more inspirational videos created by Mark Brahmin.

This month, we’ll be launching a new section at AltRight.com, Red Pills, which will be the basis of a book published by RADIX in the fall/winter. These are articles on the basics of Alt-Right thinking: race, identitarianism, the Jewish question, sex and gender, and more. It is designed as the “first word” on the Alt-Right, but not the last. While thousands might buy the book, millions could watch video presentations, particularly when done in Brahmin’s compelling and inspiring style.

Many of you have been receiving messages like when visiting AltRight.com. 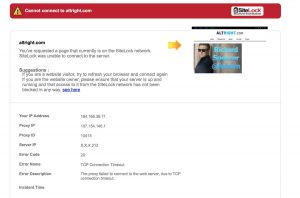 These are actually not a result of hackers, but simply due to the fact that our server getting overwhelmed with traffic. In other words, it’s a good thing!

To accomplish all these things—to hire more news writers and columnists, to produce more podcast, to take our videos to the next level, and get a dedicated server—we need your help.

I understand how some balk at fundraising appeals, which often get derided as “eBegging.” And for good reason! The fact is, the “conservative movement” has raised billions, with very little to show for it besides tax cuts for billionaires and make-work jobs for doofuses.

Think of how much has changed in the past two years . . . how much of an impact our movement has had . . . how “Alt-Right” and even “Richard Spencer” have become household names . . . All of this was done on a shoestring budget!

Imagine what we can do when the battle station is at full capacity, when we have an institution that does not compromise . . . that is fearless . . . that is radically mainstream!

TopicsAltRight.comfundraising
Share on FacebookShare on TwitterShare on RedditShare on VKontakte