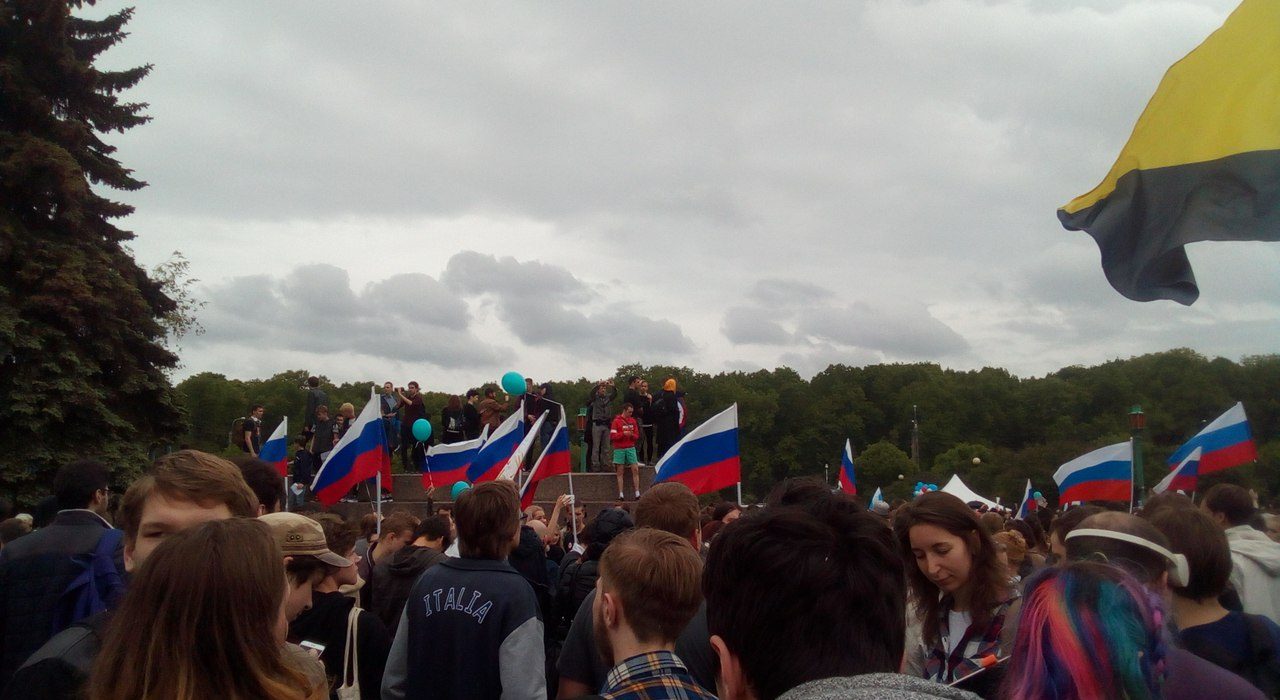 More Protests In Russia From Navalny And The Liberal Nationalists

Your humble contributor nearly gets thrown in jail by Ivan Ivanovitch.

Today is “Russia Day”. Its a new holiday that was born in the 90’s in the aftermath of the Soviet collapse.

I’ve said it before, and I hope to say it less going forward, but Russia is a strange place. Some historians think that Moscow is the inheritor of the Eastern Roman tradition. If that is true, then the main legacy Russia inherited was Byzantine politics. Which brings me to the topic of Navalny and Russia’s Liberal Nationalists.

Navalny’s opposition movement held yet another day of protests. I went to the one in St. Petersburg to snap some photos and see what it was all about. Almost immediately after I got there, the police started cracking down and I narrowly avoided being arrested. It all started innocently enough though.

I had just begun a friendly conversation with some really young (possibly underage) kids waving a Gadsden flag and an AnCap flag right in the center of the square.

I had just started to hear about how Russia needed more free market reforms and how private property was great- typical Libertarian stuff- when four riot gear sporting police barrelled into us. They snatched the budding captains of industry and started to goosestep them towards the minibuses that were going to drive them away to the station. The rest of the crowd and I started scattering.

I ran for it because I was afraid that they were going to arrest me as well. The meeting was technically illegal, seeing as they didn’t get permits beforehand. Most importantly for me, I don’t think I could ever live down the shame of being arrested at a Liberal rally or for being mistaken as a free market advocate. Going to jail for my race is one thing, but going to jail for Capitalism is quite another.

There were probably about 200 protestors by the time I got there, and they were all in this partially walled-off square in the center of the Field of Mars that surrounds the Eternal Flame commemorating World War II.

Once inside the walls, you’re kind of trapped and a sitting duck for police to pick you off and haul you to the station. After I bailed out of the cauldron, I collected myself and snapped a few pics of the guys who just got arrested being driven out of the protest. If they are underage, they get fined and their parents pick them up a few hours later. If they are older, they get fined more seriously, but they also get let out usually by the end of the day.

But who is Navalny? There hasn’t been a definitive expose of the guy written up yet. This could mean he’s still considered small fries by the regime or that they are still doing their homework. For now, here’s a quick rundown.

A handful of Nationalists seem to like him. But he is definitely not the Nationalist choice in the 2018 elections, that’s for sure. While Navalny has had a bit of a shitlord past where he would throw out ethnic slurs from time to time and talk about Russia for Russians, it’s really not as controversial as all that. Lots of Russians used to say similar things, especially in the 90s. And lots of Russians say these things in the company of their friends or colleagues. It’s not really a massive declaration of one’s true loyalties. In fact, latent nationalism is a powerful force in Russia, and every opposition candidate tries to dip into it.

Navalny’s core base are young liberal arts students who want to live in the West. They’re nice enough, even if they’re a bit cucked and naive about the nature of the modern West.

Overall, it was a poor showing. And the main event in Moscow was a bust as well. Navalny was arrested at his apartment before he could even make it to the main square. Anatoly Karlin lives in Moscow and wrote a detailed take on the whole drama unfolding there.

The Western media is making it out to be a huge day of unrest in Russia. It really wasn’t from what I saw in St. Petersburg (the most liberal city in Russia). There were way more people nearby just enjoying the festivities of Russia Day than there were protesting on the Field of Mars.

As for the crackdown, well it sent a message. And the message is simple, Putin is the only game in town.