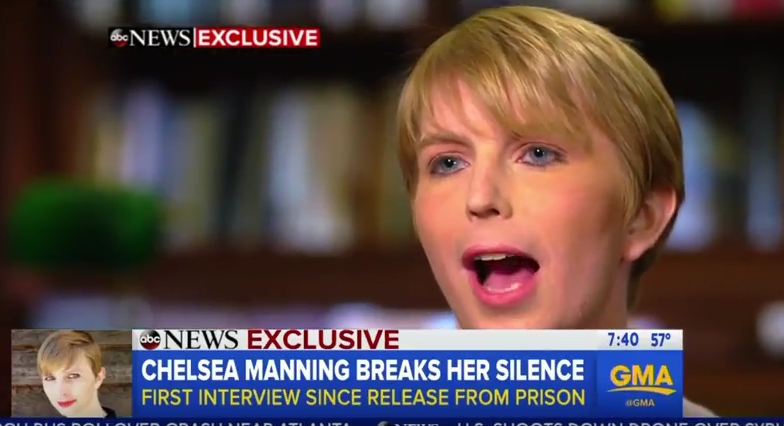 It doesn't get weirder than this story

Bradley Manning has gotten very far into his transitioning process. I mean, just look at him/her.

Some call Chelsea a hero. Some call her a traitor. All I know for sure is that she is definitely a he.

Manning gave his first interview since being released. You may want to strap in for this one:

Released from prison on May 17, the upcoming interview with “Nightline” is Manning’s first public interview as a free citizen, but maintains that despite her experience, she has “nothing but utmost respect for the military.”

Manning’s story is frankly bizarre. It seems that he got out of prison by conveniently becoming trans just as transgenders and gays in the military suddenly became a hot button topic.

During her trial, Manning was acquitted of aiding the enemy and explained that she didn’t leak the information to sabotage the United States or to compromise national security, but to spark conversation in the public domain.

Manning announced that she was transgender just days after her 2013 sentencing, and the U.S. military initially denied hormone therapy while she was incarcerated.

Manning’s ACLU lawyer, Chase Strangio, filed a lawsuit in September 2014 to fight for her right to hormone therapy.

Strangio noted that Manning was “the first military prisoner to receive health care related to gender transition and was part of a shift in practice that lead to the elimination of the ban on open trans service in the military.”

The story is so bizarre that it is hard to pick a side. But as it stands now, Manning hasn’t achieved Jenner status in terms of media accolade. No one is sure what to make of Manning just yet. I’m not sure whether thats a good thing or a bad thing.