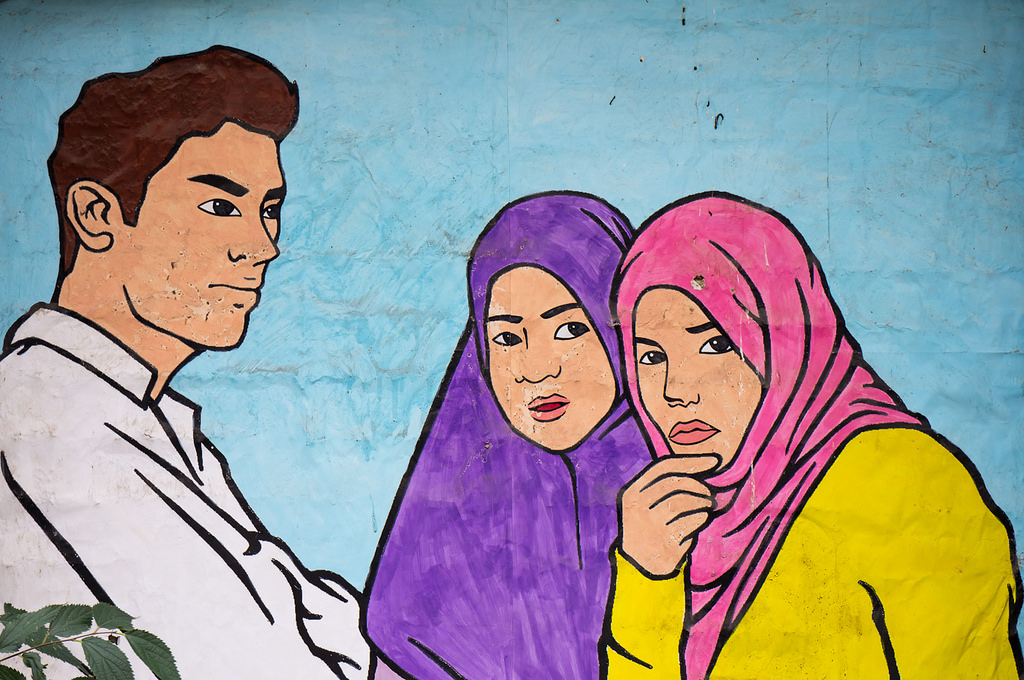 The Religion of Peace Declares Jihad on Trump

Will New York be next?

“This is the recompense of those who fight against Allah and His Messenger, and hasten about the earth, to do corruption there: they shall be slaughtered, or crucified, or their hands and feet shall alternately be struck off; or they shall be banished from the land. That is a degradation for them in this world; and in the world to come awaits them a mighty chastisement.”-The Quran

If you think Europe is the only place where open jihad has been declared, think again. In fact, this religion of death, murder, rape, pedophilia, and mayhem, which is billed as the Religion of Peace (more like the religion of resting in pieces), has been at war with White people from its inception over 1400 years ago.  It is a religion that always attempts, and usually accomplishes, complete dominance over all those who have the misfortune of falling under its sword.

After the most recent attacks in London, where dozens of White people had their throats and various body parts filleted and splayed wide open in the most vile manners imaginable because they had the audacity to be walking down the street and breathing, it is abundantly clear that Islam must go. It is a cult of insanity that has no place in the modern world nor should it ever be allowed in our White homelands. Nevertheless, it is about to become the largest religion in the world and is growing at an astonishing pace that does not seem to be slowing any time soon. In the U.S.A., it is currently the 3rd largest religion, and will probably overtake 2nd in the next few decades. This cannot be allowed to continue.

President Trump reacted to the horrors in London via some angry and impassioned tweets.

At least 7 dead and 48 wounded in terror attack and Mayor of London says there is "no reason to be alarmed!"

Right away, several people counter-signaled President Trump about his reaction because it’s never the heinous Muslim terrorist acts themselves that deserve the criticism or repudiation, no. To be sure, it’s someone’s angry Twitter reaction to the genocidal crimes that deserves all the vitriol one can muster.

A CNN host named Reza Aslan, a man of Iranian decent and someone who ate human brains for “good TV“, even called Trump a “piece of shit” due to Trump’s call for a new travel ban.

Hours before the London attack in NYC, a group of Muslims decided to protest Trump’s Freedom of Speech and blocked off the very heavily fortified street in front of Trump Tower to protest Trump’s racism against Islam, even though Islam is not really a race.

The Hamas-linked nut job, Linda Sarsour, who is a strong advocate for Sharia law, organized this protest in Manhattan’s Midtown. She has been the most recent face of Islam propped up by the leftist media in the U.S.A. lately. Here is an example of her demented affinity for her interpretation of the wonders of Islam:

We have seen this Islamic show of force many times over that the Muslims display around the world to let everyone know they have planted the flag of jihad, and it is coming for us all. It is part of their call to arms and a direct assault on its host-country’s people and culture. Islam does not seek to live and let live; it only seeks to conquer. 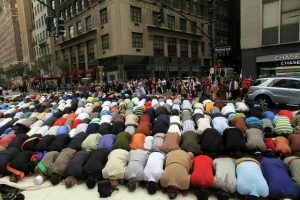 Muslims will not stop until we have all been killed or converted. Take the Middle East for example. It is where Christianity began, and currently almost every Christian has been systematically removed by flight from fear of violence or outright murder, along with destroying virtually every non-Muslim culture, and nearly every former Christian city or church is under the rule and control of the moon flag of Islam.

I just cannot understand why we are importing this brand of insanity to our homelands. Where is the moral imperative for more Vibrant Diversity? What is truly in it for us? Why must it happen in White countries, and only White countries? No one is pushing for more White people or Christians in Saudi Arabia. They will not even allow a Christian church to be built there, let alone encourage anything resembling Diversity. However, we all know what it means for us and all other White European nations: more death, more destruction, more rapes, more hatred of our people, more police state, never feeling safe, never trusting anyone (especially not your PC peers), and living in constant anxiety.

In 1970, there were fewer than 100 mosques in the entirety of the United States. Now, there are well over 2,000 and growing, along with its skyrocketing millions-strong Muslim population.

“In this climate of fear, the calculating but apparently non-violent Islamist compares favorably with the uncompromising, blood-soaked Islamist terrorist. He is thus regarded as cause of hope – indeed, as a moderate – by government and opinion elites. This, despite the fact that his agenda is essentially the same as the terrorist’s: Only their methods differ, and even those differences are shades of gray.”-Andrew C. McCarthy is the former federal prosecutor who convicted the notorious “blind sheikh” and other jihadists for waging a terror war against America, including the 1993 World Trade Center bombing.