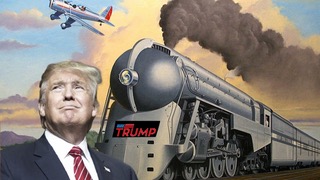 The Trump Train Starts Its Farewell Tour in the Orient

Or how I learned to start loving Israel and the House of Saud.

President Trump could not have picked a better time to leave the U.S. this last weekend, as his administration has been mired in scandal after scandal since January. Calls for impeachment due to both the firing of James Comey and claims of “Muh Russia” still plagued Trump, despite his trip. Many political experts believe that Trump could possibly be impeached as early as this summer if Mueller’s reign of terror bears any fruit on the Russian front and Trumps favorability ratings do not improve. Trump smartly decided to take his 4-D chess game that was looking more like a Zugzwang catastrophe on the road and went Kerouac on us all. However, what Trump’s critics did not expect was that the president was going to pull off what many consider a Herculean feat above all feats called: The Boomer Trifecta.

The stars aligned perfectly during his trip and we saw the Boomer Trifecta shining forth in all its dazzling radiance.  Trump managed to commit to even more Sunni-backed terrorism and an increase in funding for the Military Industrial Complex, and all while simultaneously shilling for Israel the entire time. Many people in the political classes have attempted this achievement in the past, but no one has done so with such fervor and speed as Donald J. Trump because the difficulty rating is off the charts.

Israel wants an unstable Middle East; they believe they are safer that way because they become less of a target with all the infighting. Terrorism helps achieve this end. Trump ensured unending future terror by selling $110 billion dollars’ worth of weaponry to a nation known for its intolerant Islamic theocracy, human rights violations, Wahhabism, and ability to turn out terrorists, like Detroit used to turn out GM cars. The Saudi government is supposed to use these weapons to “fight ISIS”…

The deal will provide the Saudis with fighter jets, tanks, combat ships and anti-missile defense systems. Does anyone else remember 15 out of 19 9/11 terrorists were from Saudi Arabia?

Donald Trump had this to say regarding the jobs created by the deal: “Hundreds of billions of dollars of investments into the United States and jobs, jobs, jobs.”

One cannot properly attack every country on Israel’s hit list without having a proper war apparatus in place to coordinate all these attacks and fighting overseas. The U.S. takes private war contracting to the highest level, and that is exactly where this money is supposed to end up. Lockheed Martin, Boeing, and Raytheon will all probably be getting rich off this deal. This is how Israel has us do their bidding: banking, coercion, and bribery. Eventually, Judas Iscariot rears his ugly head and takes his 30 pieces of silver.

Yet, another instance of Trump’s impassioned and undying support for the (((chosen))) people was when he gave his farewell speech on Sunday before heading to the promised land itself. Donald Trump has shilled for Israel for decades now. I’ll have to admit he is getting much better. In Saudi Arabia, he really came into his own. His biggest shill moment for the tribe during his trip before heading to Israel was this moment when he boldly stated, “All nations of conscience must work together to isolate Iran”.

Holy shit there's a larger context and it looks even more evil. pic.twitter.com/5DHGkWbInj

Men of conscience, all of them.

We often forget how much Boomer’s, like Trump, love war, defense spending, having enemies, and supporting Israel-it’s in their DNA. This may account for Trump’s dramatic rise in poll numbers recently.  Like many men before him, he has learned that Boomer Nationalism is as strong as it has ever been. As a result, Trump’s recent meteoric rise in the polls to almost personal record numbers are largely because he has his finger directly on the pulse of said Boomers; those brave men and women who will take time out of their busy lives of fighting for Social Security COLA adjustments and lowering Part D Medicare prices at the cost of future generations, and answer the tough questions of a pollster about what they think about those lazy Millennials. For now, at least, it seems that Trump has channeled his true Neocon spirit. But hey at least he didn’t bow like Obama did, right fellow Patriots?

Unfortunately, for Trump, when his trip is over and he has returned home, the Sword of Damocles will again be placed back directly over his head, but until then, he can revel in the warm glow of Boomer praise.