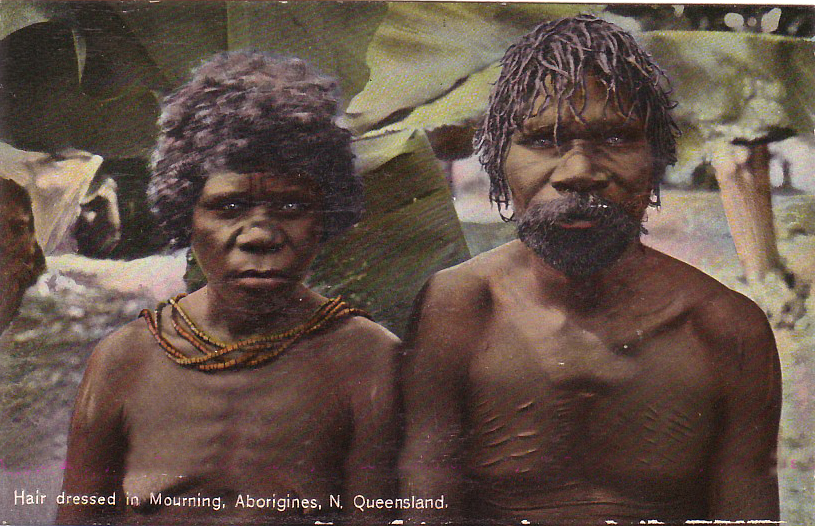 Abos get lathered up at the prospect of yet more Gibs

In Australia, it’s nearly Reconciliation Week (27 May-3 June). This, as you can probably imagine, is an annual festival of shame when White Australians get to feel bad about living in the country our ancestors claimed from the wilderness and made our home.

Reconciliation means gibs, pure and simple, for a race of people so victimized by us that we pay all 500,000 of them 30 billion a year just for existing.

There is a story taught in schools that Aboriginal welfare workers used to go around for decades abducting half-caste Aboriginal children from safe, loving homes in and putting them in orphanages and training schools purely out of the wickedness of their hearts, because being wicked skin-colour haters, they had an insane compulsion to breed out the melanin. (In fact, Aboriginals traditionally had their own ways of dealing with half-castes, and they weren’t pretty…)

As can well be imagined, this Shoah-esque state of affairs has resulted in both first and subsequent generations of “survivors” feeling that they are owed something in the form of hard cash from the Government.

Here is the media gearing up for another round:

Michael Welsh has a few names he goes by, and one of them is Number 36.

It is the number he was given instead of a name, at the notorious Kinchela Aboriginal Boys Training Home on the New South Wales mid-north coast.

Removed from his mother by welfare officers in 1960, Mr Welsh and one of his brothers were separated from their family.

Well, as a New South Welsh member of the “Stolen Generations,” Walsh has already had a personal compensation payment of $75,000, awarded him just last year, so understandably he‘s hungry for more.

In addition to that largesse, his former school (which in fact gave fewer canings than the average school in its day, and was in any case largely run by Aboriginals themselves) has now been turned into a “healing centre” with 5 million extra dollars of taxpayer money. Before that, it had already been repurposed once as a drug and alcohol rehabilitation centre…

Yes, you guessed it.

I mean, children were given NUMBERS! Oh, the humanity! And we know this to be absolute fact, because of “survivor” testimony. None of whom have a direct material interest in spinning a tall yarn:

Now survivors are renewing their call for a national compensation fund, and better support for an ageing population of people with deep scars.

A report will be handed to Prime Minister Malcolm Turnbull today by the Healing Foundation, an Indigenous support organisation.

It recommends the Commonwealth share the cost of compensation with states and territories, and the institutions where children were sent.

Ian Hamm, who was removed from his mother in 1964 in northern Victoria, believes there is much more to do.

“We need to talk about reparation and redress. It is unfinished business for the country,” he said.

He said the removal of children was a “societal practice”.

Yeah, weasel words there. The thing is, there was never any federal or state law mandating or even alluding to the removal of Aboriginal or half-caste children from their families. Not that the average Australian knows this. There is no real evidence that this behind-the-scenes policy of half-caste removal existed. In fact, it would be a pretty extraordinary conspiracy if it had, because during most of the time it was supposedly going on, concurrently, in all seven States and Territories, different agencies operating under different legislation and different leadership. It’s all based solely on the testimony of “survivors.”

This propaganda circus marked the beginning of a massive public brainwashing campaign centered around the idea of Australia having perpetrated a Holocaust against its indigenous people. The comparison was made explicit in the Senate report:

The Aboriginal and Torres Strait Islander Commission (ATSIC) recommended to the Inquiry that, ‘Support be provided for the collection and culturally appropriate presentation of the stories with the approval of those who experienced separation policies’ (submission 684 page 18). Link-Up (NSW) called for the establishment of an Aboriginal Oral History Archive. This Archive would be ‘modelled on the Shoah Foundation set up to record the oral histories of Jewish victims of the Nazi holocaust’ and would ‘fund and facilitate the collection of oral histories of Aboriginal survivors of our holocaust’ (submission 186).

Cynthia Sariago is a Stolen Generations descendant whose mother was stolen — and she herself was fostered as a child.

She views the lack of compensation delivered to thousands of Stolen Generations members as an “insult”.

“Many families have been unable to build a legacy for their children and grandchildren, unlike many Australians with regular family histories.”

She said a national scheme would make a huge difference to the “inherited poverty many families with Stolen Generations heritage now face through no fault of their own”. 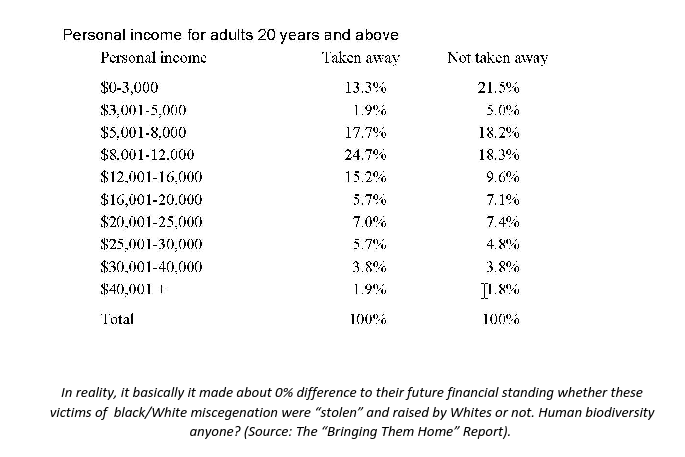 In reality, it basically it made about 0% difference to their future financial standing whether these victims of  black/White miscegenation were “stolen” and raised by Whites or not. Human biodiversity anyone?

Bringing Them Home said what governments did to Aboriginal children to assimilate them into white society amounted to gross human rights violations.

Yes, this would be the report that contains such unintentionally hilarious statements as the following:

It is not possible to state with any precision how many children were forcibly removed, even if that enquiry is confined to those removed officially. Many records have not survived. Others fail to record the children’s Aboriginality.

So they were removed for no reason other than just for being Aboriginal—and yet this wasn’t recorded on any paperwork? Of course, as with another popular campfire story, the absence of any written records, orders from those in authority, or relevant legislation doesn’t mean it didn’t happen!

Another layer of the ridiculous about this sob-narrative is that prior to the era of paying single women to pop out babies, which began in the ‘70s, it was normal for any child born to an unwed mother to be placed in an institution. How many half-castes were the product of legitimate unions, I wonder, given the rampancy of prostitution in Aboriginal settlements?

Anyway, there has so far only been one successful suit by an Aboriginal man, Bruce Trevorrow, whom a court found ten years ago to have been wrongfully removed from his family, though not for any reason having to do with his race. Activists represent this case as proving the reality of the Stolen Generations, but courts disagree. In the absence of proof for their claims, money-grubbing activists want blanket compensation for any Aboriginal who was ever removed from an abusive or neglectful home.

The graph below shows how much more often Aboriginal children are abused to this day compared with the rest of the population: 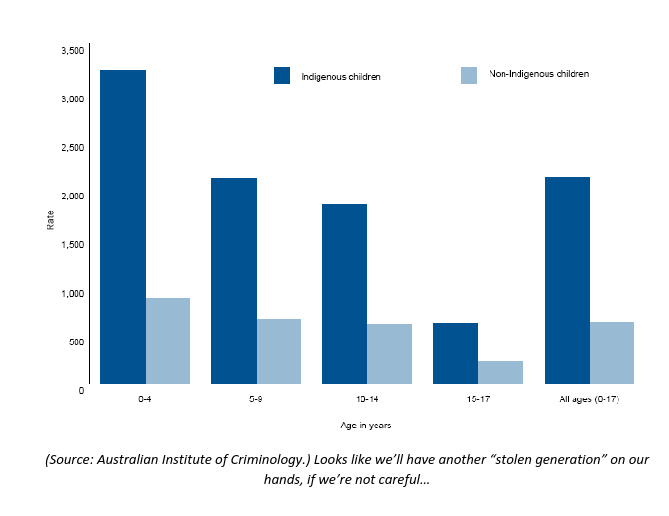 (Source: Australian Institute of Criminology.) Looks like we’ll have another “stolen generation” on our hands, if we’re not careful…

Another little quirk about the Report is that it consists exclusively of 535 “survivor” statements (some of which actually break into song at various points). And just like at Nuremberg, the accused were not allowed to cross-examine their accusers. The commission didn’t even bother to get the other side of the story at all, interviewing none of the surviving bureaucrats, social workers, and missionaries who could have presented a balanced view of what happened.

The inquiry made 54 recommendations, but 20 years on, many have been implemented poorly or not at all.The national apology was a key recommendation of the Bringing Them Home inquiry, and it came a decade after the report was delivered.

Families who believe they are becoming part of a second Stolen Generation in the Northern Territory are fighting to have children cared for by relatives or Indigenous carers.

Just like in America where any time a White (or Hispanic, or black…) police officer does his job and puts down a violent thug, in Australia we have a similarly invidious situation where it’s impossible to help this violent racial underclass without being accused of institutional racism, the sole proof of which is that blacks get in trouble more and need more intervention in their communities to keep them from reverting 100% to savagery.