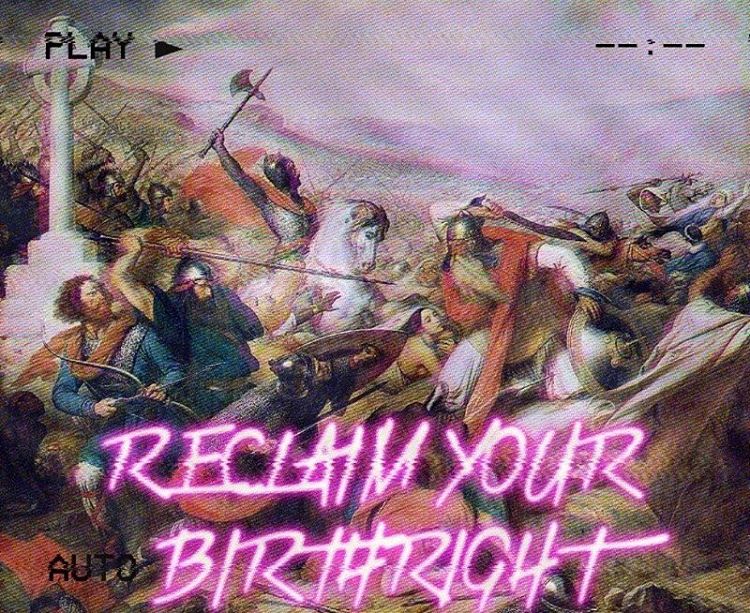 The Doctrine of Sola Ratio is Cultural Poison.

“There is a fundamental error in separating the parts from the whole, the mistake of atomizing what should not be atomized. Unity and complementarity constitute reality.” – Werner Heisenberg

Inherent in, and unique to, the White Race as a whole is a courageous pioneering spirit and a ravenous curiosity which drives a will-to-transcendence unparalleled by any other race on earth. As a race, fear of the unknown has acted less as a barrier to our exploratory nature and far more as a motivation. This intense desire to know the unknowable, to discover the undiscoverable is the impetus of our unmatched artistic, philosophical, and scientific progress. Our willingness to challenge ideas once believed to be set in stone comes from our innate capacity to reason beyond the boundaries of credence and dogma. Mindful application of rational arguments of a social, philosophical, or scientific nature tempered by the dialectic method, acted to restrain our reason from crossing over into the irrational aether of emotion. Yet despite the wisdom of great thinkers and forewarnings from historical precedent, we abandoned this model. We surrendered our emotions to Rationalism, which now forms the basis of the majority, if not all, of the culturally lethal ideologies plaguing Europeans today.

The misapplication of Rationalism from the emotional sphere causes it to come into conflict with, as opposed to complementing, Empiricism. Empiricism is the philosophy of demonstrating the veracity of rational arguments with observable data. In contrast, taken to sensualist extremes, Rationalism abandons logic and empirically derived data, embracing a solely conceptual worldview of eternal reduction. Rationalism becomes irrational. Counterarguments fall upon willingly deaf ears. Not a single antithesis is accepted, nor permitted, precluding any synthesis of ideas. “The science is settled”, they say out of fear that the reduction will be halted and their intellectually barren worldview destroyed.

Sola Ratio describes the Liberal mindset in the most succinct of terms. It means, in essence, that feelings take precedence over facts. One’s emotions become facts. After eschewing Empiricism, one can rationalize literally any thought or action so long as he does not falter in his efforts to normalize what would otherwise be regarded as insanity. Through such efforts, Rationalism’s devotees have, in a way, fashioned a sort of pseudo-science, its core tenet being that everything is equal to the sum of its parts, and as such, these parts can be broken down, identified, and maintain utility without relation to anything else. In reality, Rationalism is deception. It is a method of persuasion the libertine uses to make ostensibly intellectual arguments for normalizing degeneracy and glorifying relativism based purely on amoral subjectivity.

Tolerating Rationalist sophistries is why we have suffered the normalization of such ideas as radical feminism, transgenderism, pedophilia, after-birth abortion, promiscuity, multiculturalism, social and academic mediocrity, egalitarianism, and of course, White Privilege. The irrationality of Rationalism is why such nonsensical assertions like “It’s impossible to be racist against White people”, “Gender exists on a spectrum”, and “White women cannot be raped” are now being taught as curriculum in academia.

A recent example you may be familiar with involves Bill Nye. Most of us born in the 80s and 90s are familiar with Bill Nye’s show Bill Nye the Science Guy. In a 1996 episode entitled Probability, actress Amy Broder briefly describes chromosomes, using them to explain the probability that a fetus will become a boy or a girl. Twenty-one years later, on Bill Nye’s new show Bill Nye Saves the World, actress Rachel Bloom awkwardly performed a segment now colloquially known as the “Sex Junk” song. Without going into the vulgar details of this so-called song, we are supposed to learn from it that it is okay to cast aside empirical data for rationalistic sensualism. The Theory of Evolution is made a mockery of by the claim that transgenderism is somehow a part of human evolution, gender-fluidity is normal, and that sexual preferences somehow lie on a spectrum.

Again, the foregoing is only a recent example. For a quarter of a millennium, everything from politics, economics, education, law, the arts, and cultural mores has in some way been tainted by Rationalism.

The French Revolution of 1789 marked the dawn of Rationalism in politics when age old customs and traditions were uprooted, discarded, and replaced by Republicanism. French radicals sought to enshrine individualism and social and economic liberalism as the highest, noblest achievements of man. While the minutiae of the French Revolution are beyond the scope of this article, not all effects borne of it were negative. However, the long-term consequences of its driving ideology far outweigh any positive outcomes it produced.

The “Ideas of 1789” – Liberty, Equality, and Fraternity – are characteristically commercial ideals which have no other purpose but to secure certain advantages to individuals. – Werner Sombart

The exaltation of the individual, more precisely the economic individual, became the norm. ‘Liberty’ became a war slogan, a negative in that it was an opposing force to the authority of the culture-bearers. In practice, it no longer meant ‘freedom to’, but ‘freedom from.’ The underlying intent was to do away with national (i.e. racial) identity by first abolishing authority, which of course rested with the monarch. Yet the incautious attempt at annulling the crown resulted in its proliferation, the redistribution of its powers and riches amongst “the people.”

The people, once subjects under a single ruler, had unwittingly created slaves of themselves, subordinate to a multitude of economic masters whose loyalties lay not in the national interest, but in solely economic interests. The individual was held up as the highest good, the supreme authority, resulting in the deposition of the culture-bearing stratum. Man was now God, having no need for the spiritual and cultural nourishment once provided by the Culture-Organism. Hence its purpose was rationalized away and its remains cast into Ceadas.

Now unconstrained, Rationalism spread like a toxin in the veins of an already anemic White Culture, not on account of any outward appeal of its own, but by way of the ever opportunistic Culture-distorter. He had finally found a way to systematically dismantle the High Cultures which had, until then, stifled his insatiable lust for riches.

Rationalism thus gave rise to the two most deadly economic and social systems devised, Finance Capitalism and Communism. These two ostensibly opposing, yet demonstrably symbiotic worldviews ushered in an age of rage and ruin. Power and authority were maligned. Societal structure was inverted. Morals and values gave way to debauchery leading countless millions to their deaths as thousands of years of European Imperium were vanquished within a mere two centuries.

“Liberalism can only be defined negatively. It is a mere critique, not a living idea. Its great word “freedom” is a negative. It means, in fact, freedom from authority, i.e., disintegration of the organism. In its last stages it produces social atomism, in which not only the authority of the State is combatted, but even the authority of society and the family.” – Francis Parker Yockey, Imperium

As history demonstrates, Rationalism cannot be defined as a positive force in the world, only a negative one in that it is an endless cycle of derivative theses. It is the outright denial of the reality of a spiritually organic Culture, the rejection of destiny. Once introduced into the host, it begins tearing away the layers of the Culture-organism until there is nothing left but rot. No cultural institutions are left untouched.

Reason is a product of life, and the attempt to turn the tables and make life into a creature of Reason was doomed in practice. In theory, however, it lasts two centuries in all High Cultures. The sole effect is to destroy.

It destroys culture, in the narrower sense of art forms and literature, it destroys traditions of service, dignity, loyalty, honor. It destroys the State-idea as embodied in its last refined form, the Absolute State. It lays the Civilization waste from within, politically speaking. Having leveled all the political and social powers, Rationalism can now look upon the monster of its own creation, the absolute power of Money. – Francis Parker Yockey, Imperium

The only redeeming quality of Rationalism is that it provides its own cure in the form of reactionary movements against it. It’s constant assaults against the natural inclinations of man have served to inform the successive generations condemned to suffer its effects, and thus the reactionary movements evolve into proactive immunities. Yockey’s prophecy is fulfilled as the two-century reign of Rationalism enters its twilight years and our heroic spirit is experiencing a reawakening. The revitalization of the European Culture-organism manifests in the emergence of the Alt-Right. Man is no longer a creature of reason alone, signaling the rejection of the rationalistic culture-pathogen, the death of individualism, and the passing away of the Dynasty of Mammon. The collective history and destiny of the European people is coming into focus in our ascent toward the new Age of Action.