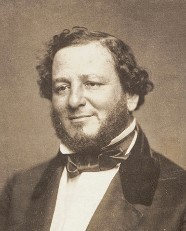 Why Has Judah Benjamin’s Monument Not Been Removed?

In all the hysteria surrounding the removal and desecration of Confederate monuments in New Orleans, Louisiana, one is hard pressed to find any mention of Judah P. Benjamin. Although lauded as the “Brains behind the Confederacy”, and with his visage (dis)gracing the face of the Confederate $2 bill, many Southerners do not know who he was. Yet despite his prominent role in New Orleanian society and the Confederacy, a monument to him still stands just 10 miles Southeast of New Orleans outside the public library in Belle Chasse, Plaquemines Parish, Louisiana.

Born in 1811 to Sephardic parents in St. Croix, Benjamin immigrated to Charleston, South Carolina which was then the epicenter of merchant activity in the United States. After attending both Fayetteville Academy and Yale, Benjamin abruptly left the latter for New Orleans where he began working at a law firm. Because French was practically a requirement for working in law in the area, Benjamin hired himself out to teach English to French speakers on the condition that they teach him French. During this time he developed a love affair with one of his students, Natalie Bauché de St. Martin, a daughter from a prominent, local, Catholic family whom he soon wed.

“Benjamin was virtually suborned to marry [Natalie], and did so without hesitation in order to further his ambitions”. – Winston De Ville, The Marriage Contract of Judah P. Benjamin and Natalie St. Martin, 1833.

Eventually, Benjamin’s success in law earned him considerable wealth which he used to purchase Bellechasse Plantation, as well as at least 140 slaves to work it. He went on to become a member of the Louisiana State House of Representatives and then a United States Senator, being appointed by the Whig Party both times. During this time he was sent as a New Orleans delegate to a legislative convention where he successfully argued against counting slaves as three-fifths of a person for the purpose of representation in state elections.

On December 31, 1860, as secession drew near, Benjamin gave a farewell speech to the United States Senate and swiftly left Washington for New Orleans. Two months later, he was appointed as Attorney General of the Confederate States of America by Jefferson Davis. Benjamin was later to be appointed as War Secretary that same year and as Secretary of State in 1862.

As defeat loomed over the Confederacy in 1865, President Davis, Judah Benjamin, and other cabinet members boarded a train bound for Texas. Confederate forces remained active there and Davis was determined to fight on. But Benjamin was busy making plans for an escape. While in Abbeville, South Carolina, Benjamin told Davis that he would like to travel to the Bahamas in order to be better able to communicate with foreign agents and that he would eventually rejoin Davis in Texas. Even historians admit that this was a lie.

“The pragmatic Secretary of State almost certainly never had any intention of returning to the South once gone.” – William C. Davis

Benjamin, being the  coward that he was, rode straight into Florida, evading Union capture by pretending to be either a Frenchman who spoke no English or a farmer from South Carolina. From Florida, he boarded a ship due for the Bahamas. During inspections by American soldiers, he feigned to be the ship’s cook, with inspectors remarking that it was the first time they had seen a Jew doing menial labor.

He caught a ship in the Bahamas bound for Havana, and from there made it to Southampton, England where he reunited with his family and lived out the rest of his life writing and practicing law.

Despite Benjamin’s history of owning slaves, arguing successfully against their humanity, and serving the Confederacy in three different positions, historians and tribesmen seem to have mostly kind words for dear Judah.

“He was the architect of the government of gentlemen…He just sort of exemplified the kind of brains and ambition that poured into the city in those glamour days before the Civil War…before the war, he was really almost running the state.” – Lawrence Powell, Professor of History, Tulane University

“Benjamin’s political ventures in the U.S. Senate and in the Confederacy of Southern States were bracketed by two discrete but equally remarkable legal careers, the first here in New Orleans and the second in Britain,”  – SCJ Ruth Bader Ginsburg

“He really was an extraordinary figure because he was so brilliant, because he was so competent, and because he chose as much as he could to remain in the background because it was safer there, to remain somewhat aloof — that constant smile he wore, which I think was a way to set himself apart and not engage” – Eli Evans, Judah P. Benjamin: The Jewish Confederate.

“But whether or not Benjamin practiced Judaism overtly or contributed to Jewish causes, to the Jews of the South, he was a symbol of a coreligionist who was a man among men” – Myron Berman, Richmond’s Jewry, 1769-1976

“We can easily prove that Benjamin was the only genius in the Confederate cabinet. We can demonstrate that his career, with its American and English phases, was more glamorous than that of any other prominent Confederate.” – Robert D. Meade,The Relations Between Judah P. Benjamin and Jefferson Davis: Some New Light on the Working of the Confederate Machine

Rather than the typical slurs such as “racist,” “bigot,” and “supremacist,” used to describe his Confederate counterparts, Benjamin is instead remembered as an extraordinary figure, brilliant, competent, remarkable, the only genius in Davis’ cabinet, and a man among men. Here we have a man with all the same qualifications anti-Whites use to condemn Whites Southerners, save for one apparently redeeming fact; he was Jewish.

Given this single attribute, is it a coincidence that Judah Benjamin’s memorial still stands? Is it sheer luck that his name and reputation as a slave-owning Confederate cabinet member hasn’t crossed the lips of the vocal, anti-White left? Is it by fluke that his monument remains unmolested by vandals while the names of our Southern forefathers are slandered, and the monuments dedicated to their memory have been dismantled?

Or could it be that a certain globalist coterie, with a vested interest in dismantling White Identity via erasure and denigration of their history, would rather Benjamin’s reputation not be brought to light for fear that they, too, might suffer the same fate reserved for White people?