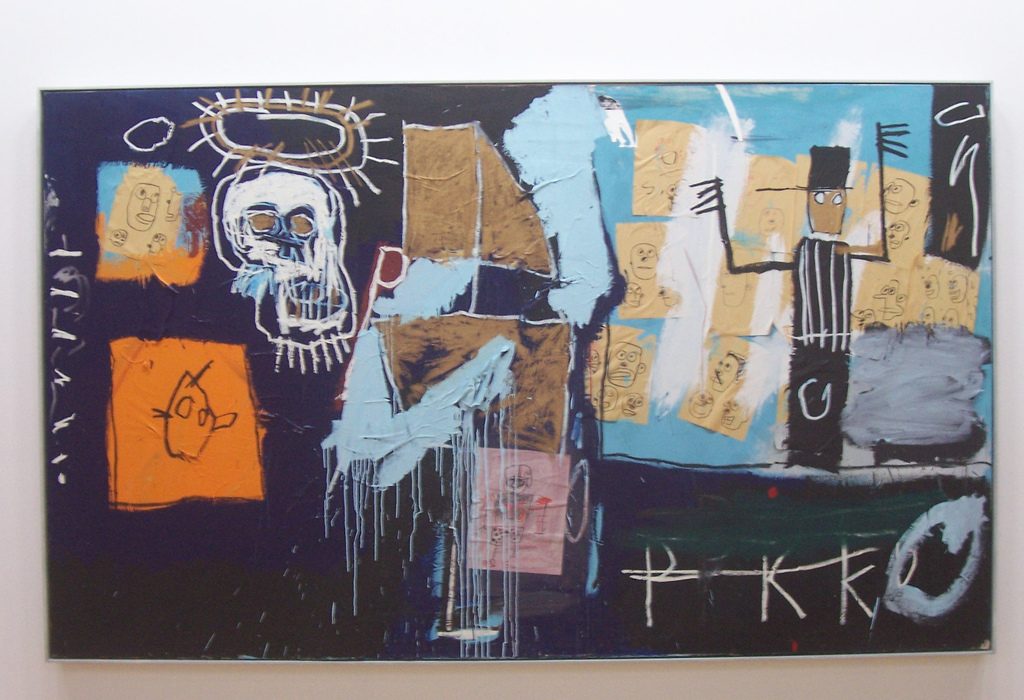 Does it get any worse than Basquiat?

A drug addled, rumored and likely bisexual, multiracial, third world, graffiti vandal from Brooklyn just had painting sell for over 100 million dollars that a three-year-old could have made in art class.

Who is Basquiat and why should I care, you ask? He has been credited by many as reviving American art in the late 20th century; however, nothing could be further from the truth.

Basquiat was mentored and legitimized by Andy Warhol, another degenerate who is famous for painting a Campbell’s soup can. Basquiat, along with a friend, originally became famous by spray painting (tagging) random nonsense all over NYC buildings that the leftists went orgasmic over.

The two men called themselves SAMO. Franklin Sirmans wrote of them,

“SAMO (for “same old”) marked the witty sayings of a precocious and worldly teenage mind that, even at that early juncture, saw the world in shades of gray, fearlessly juxtaposing corporate commodity structures with the social milieu he wished to enter: the predominantly white art world.  ”

An example of one of their tags was, “”BIG-MAC” CERTIFICATE”

You. Cannot. Get. Any. Deeper! Or maybe we all just smell the bullshit radiating from the absurdity.

Basquiat died of a heroin overdose in 1988, and many rich and famous people attended his funeral and mourned the death of this avant-garde titan of art.

Back to Basquiat’s painting in question. One could easily determine from that amount of money spent on this painting that it must certainly be something so awe-inspiring and revolutionary from someone beyond the pale that it is difficult to find the adjectives to describe them. The short answer is no. Look at it. The very supposition is as fraudulent as a Nigerian investment deal.

While in college, I took a mandatory Art History course. In all honesty, I loved the class, that is, until we reached the Modern Art section. There, I was supposed to pretend that a hack like Jackson Pollack, who threw paint at a canvas, was just another great artist that could easily be described with the exact same accolades as Donatello, Rembrandt, or Joseph Turner. I absolutely refused then, and refuse now, to even entertain that brand of insanity.

Let’s be honest. Modern Art is total garbage. It is completely based in degeneracy and is very Semitic. It is meant to be ugly and meaningless to illicit a visceral reaction or indoctrinate rather than be an expression of beauty and accomplishment. Modern art does not strive towards greatness like White art historically has. White art has always been an expression of our conquering spirit, hatred of hypocrisy, bravery, and complexity. Now, a turd with an embedded birthday candle encased in glass is touted as the most daring and provocative conception ever created. If you compare art like that to Michelangelo’s, who often took years and used several apprentices toiling day and night to create truly inspirational masterpieces, it is laughable and ridiculous. Those ancient men made sure every detail was extraordinarily precise to the point of near perfection.

In fact, Modern art is not really art at all. It is just another commodity that can be bought and sold like a stock. It is easily created and transported, much like Bitcoin. Oligarchs take their ill-gotten gains, and use them to buy these hideous creations. The perception of their value is their only real value. The oligarchs’ rationale on buying this art is summed up well by the following:

“There are…ways, and means to avoid this “maximum uncertainty on the issue of value. Dealers especially are extremely inventive when it comes to rendering this price plausible. One popular method is to refer to the production costs, making the price appear justified in objective terms. For modern painting, a ‘coefficient’ has been invented for this purpose, taking age, size, artist’s reputation and other factors into account in order to calculate the price in such a way as to avoid the question of value” Graw, I.  (2009). High Price: Art Between the Market and Celebrity Culture. Berlin: Sternberg Press, 2009.

The recent destruction of various Confederate statues around the U.S. is just another extension of this Modern art culture that has been dropped on us like an anvil from a skyscraper. This Modern art form is in large part due to the direct import of foreign peoples and ideas to our homelands. They are destroying the symbols of us, and eventually, they will be literally coming for us. We are being marginalized and subjugated at an astonishing pace, so we must act quickly.

It is undeniable that those of us in the AltRight movement need to slay the dragon called Modern art. Modern art is one of the most vital tools of the invaders. These outsiders wish nothing more than to destroy us and our future. Therefore, we must create our own art for our own people- an expression of us. No longer can we allow non-Whites to define our spirit, music, cinema, literature, or who we are.

Here is our future if we do not act:

We MUST control the present, and that begins with the destruction of Modern art!