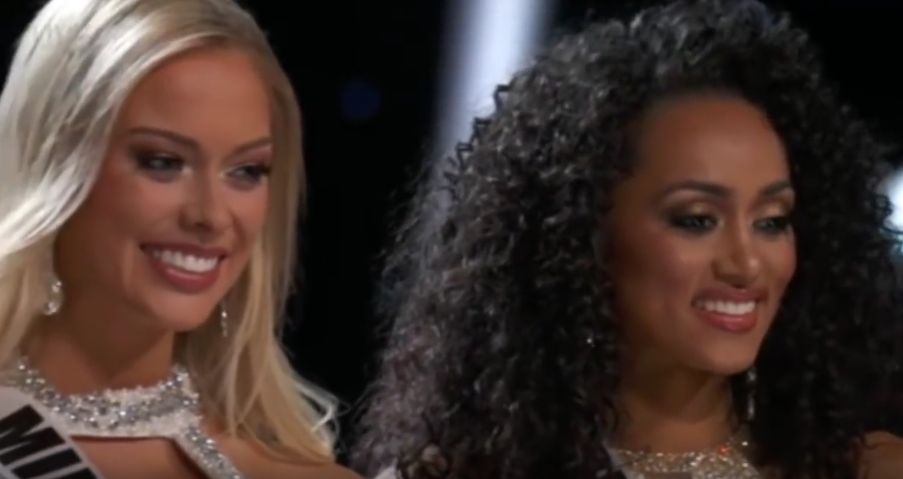 Goal To Replace Whites Made Obvious In Miss USA 2017 Pageant

Replacement is now fashionable and fun.

The Miss USA 2017 pageant recently concluded, and it was one that the progressives who follow such events will recall fondly as the best pageant ever for its overwhelmingly brown color. I didn’t watch the show, nor did I know it was even occurring until the winner, a black woman, was announced, and social media went nuts for this victory for “women of color.”

The pageant opened with the song “Black or White,” by the black and white Michael Jackson. “It doesn’t matter if you’re black or white,” goes the song, but the obvious theme of the pageant, diversity, seemed to contradict that sentiment. The racial makeup of the top ten finalists was such an extreme statistical improbability that it could only have been the result of the judges’ belief that it matters very much indeed whether you’re black or white.

Not one woman in the top five was white, which, in itself, is not the issue. (One might feel compelled to consider Meredith Gould, the third-place contestant, to be white, but I’m fairly certain she’s Jewish—Gould—and since neither DNA nor Jews themselves classify Jews as white, I’d like to stop you from making that mistake. Besides, if we were to consider Miss Gould white, that would mean the top ten still only had four whites in it, and my forthcoming point stands.) To understand the issue, we must first consider the facts:

I’m being generous by counting one of these women as white, by the way—one of the actual white ones, not Gould. Alyssa London likes to consider herself a Native American, but because she appears to have as much Injun in her as Elizabeth Warren, and because I don’t want to be accused of setting too high a bar for white racial purity, I’m calling her white.

It used to be considered a silly notion that beauty pageants were about more than just outer beauty. Everyone knew that although the contestants had to pretend to be smart, ambitious, moral, talented, and to have hobbies, such demonstrations were just filler for the pageant; it really was all about physical perfection, as the name “beauty pageant” implies. But the judges for the 2017 Miss USA Pageant have, it seems, truly considered at least one value other than beauty, placing perhaps even more importance on it than on anything else.

As People Magazine put it, and as the judges made absolutely clear, the contestants were there to represent diversity. Entertainment Weekly characterized the top ten as “beautifully diverse.” Not long ago, white women dominated these pageants, but gradually the white women have been replaced by non-whites. No longer do we have to suffer seeing whites make up the majority of American beauty-pageant contestants. It’s “beautifully diverse” now. Bustle.com praised the night by saying that putting “seven women of color” into the top ten—i.e., replacing whites in formerly and traditionally white positions—was “a huge achievement.”

Let’s look at the core point being made by such accolades. Diversity is good, I’m hearing, and it can be achieved by adding more and more “color.” Now let’s imagine a top ten made up entirely of whites. Is that a diverse lineup? No. And diversity is good? Yes. So this lack of diversity in the finalists is bad? Yes. However, it can become more diverse, and therefore it can become more good, by replacing one white person with a colored person. Now you have a situation where nine of the top ten are white, and one is, let’s say, Hispanic. We’ve headed in the right direction, obviously, because we’ve added more “color” to the finalists. We’re approaching diversity, but we’re not there yet. How can we add more color? How can we make them more diverse? Swap out another white person for another colored person. In other words, every white person you replace with a non-white brings it closer to being more diverse. Remember,

In other words, every white person you replace with a non-white brings it closer to being more diverse. Remember, diversity is good; therefore, the fewer white people, the better. Replacing whites is “a huge achievement.” If you think I’m  being dramatic, let me illustrate it another way.

Imagine the judges are considering putting only non-whites into the top ten. They haven’t officially decided on it yet, but they’re about to, and somehow this fact gets leaked to the public. The leak reveals no names, only that they’re considering exclusively women “of color.” Naturally, this leak causes some hubbub, particularly among blacks and the self-loathing whites, so the judges announce they are going to replace three of the colored women with three white women. Would such a change make the top ten more diverse? Yes, obviously, of course. Instead of ten coloreds, you’d have seven coloreds and three whites. That is definitely more diverse than the top ten being all brown. Now ask yourself, and answer honestly: Would the worshipers of diversity like this idea?

Having ten white contestants, as in beauty pageants of old, reducing them down to only three, and replacing the rest with non-whites is beautiful because brings us diversity (seven dark, three light); but having ten non-white contestants and replacing three of them with whites (still, seven dark, three light) would not be celebrated, even though the racial demographics would be the same. Doesn’t this demonstrate that it is not actually the diversity that is being praised, but that it is simply the lack of whites? (And by the way, don’t for a second believe that this applies only to beauty pageants. Diversity always means adding brown to white populations, never adding white to brown populations.) This is why we say, correctly, that “diversity” is just a codeword for “anti-white.” A diverse world is the progressives’

A diverse world is the progressives’ ideal; fewer whites means a more diverse world; therefore, a world with fewer whites is their ideal. We whites would do a great existential service to ourselves and our people to simply listen to what the non-whites and progressives are telling us and demonstrating for us, not just in beauty pageants, but in all areas of society: they want us replaced.