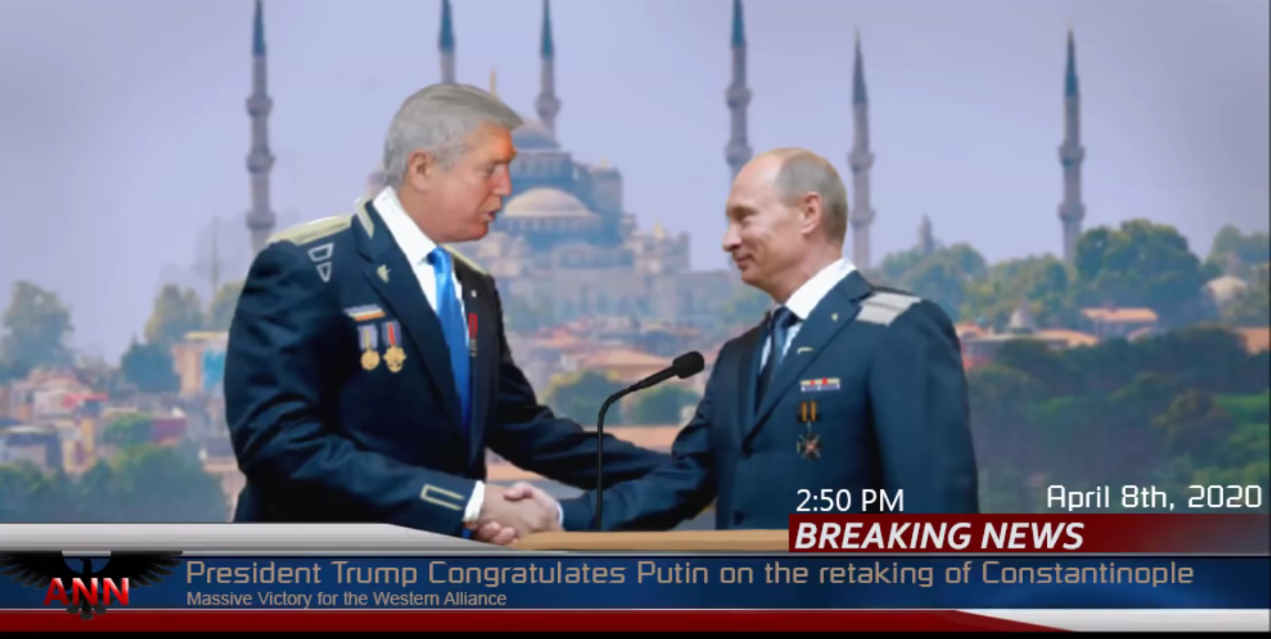 Is the Alt-Right in league with Putin?

Hardly a day goes by without some media outlet pushing the narrative that Trump was aided in his presidential victory by means of Russian intervention, an accusation that as of yet has NO basis in reality. And yet the meme continues. Still sore over their loss, lefties everywhere continue to insist that the big, bad Russian boogeyman is in cahoots with Trump and the ring-wing in America, orchestrating some grand scheme to overthrow the system.  Now it seems that the Alt-Right is secretly friends with Putin as well.

President Donald Trump isn’t the only American leader with a puzzling fondness for Russian president Vladimir Putin’s regime. Consider, for example, the chant that was caught on local television footage as it was shouted by several dozen torch-carrying protesters who rallied against removal of a Confederate monument in a Charlottesville, Va., park last Saturday. “Russia is our friend!” they shouted. “Russia is our friend!”

Yeah, maybe these people just don’t want a nuclear war with a country that has done nothing to provoke us. Did you ever imagine living in a world where alleged “Neo-Nazi White Supremacists” were the ones calling for peace instead of war? What a time to be alive!

Yet Spencer also shows a curiously deep admiration for Russia, which he has called “the sole white power in the world.” His former wife is the Russian writer and self-described “Kremlin troll leader” Nina Kouprianova. Writing and blogging under the pen name Nina Byzantina, she regularly follows Kremlin talking points.

Former Ku Klux Klan grand wizard David Duke, who has eagerly embraced the alt-right movement, has traveled to Russia several times to promote his book “The Ultimate Supremacism: My Awakening on the Jewish Question,” according to the Anti-Defamation League.

Rising self-described white nationalist Matthew Heimbach also has praised Putin’s Russia as “the axis for nationalists,” according to an interview by Business Insider. “I really believe that Russia is the leader of the free world right now,” he told the news website. “Putin is supporting nationalists around the world and building an anti-globalist alliance, while promoting traditional values and self-determination.”

Again, this is only natural. Russia is one of the few countries left that supports and upholds Pro-European values such as strength, unity, racial awareness, etc. Putin even addressed the ongoing ethnic displacement of European peoples in one of his press conferences.

There is no underhanded scheme going on here, simply a natural admiration fostered by our movement for a figure that supports policies and acknowledges facts which promote our interests.

It may be only coincidental that white nationalists cheer Russia as “our friend” two days before President Trump was reported to have revealed “highly classified” secrets to two high-ranking Russians in the Oval Office. But both episodes raise questions about how much Putin may be actively engaged in sowing divisions in this country.

THERE IT IS! The implication is brought forth again and again: Trump and the Alt-Right are engaged in some sort of secret kabal with Putin to take over America. What a laugh!

These whackjobs are promoting a kook-tier conspiracy theory to explain a very natural phenomenon in an effort to fear monger against anyone who would dare commit the heinous thought crime of advocating for White interests. What’s hilarious is that these same people have the gumption to call us “conspiracy theorists” for pointing out the over-representation of certain groups in the media.

Muh Russian Conspiracy is a forced meme with absolutely no credit to its name that was born out of the need for an excuse as to why Trump won. It’s the classic case of the sore loser. Until actual evidence is brought forth to support this ludicrous theory, it should be taken exactly for what it is: a joke.

If nothing else, we know that Putin is delighted to see us Americans divide ourselves against one another. That’s how he gained almost unquestioned control in Russia. Dividing Americans against one another is something that the alt-right also is delighted to do. The rest of us need to show them, in the words of the late Rodney King, that we still know how to get along.

No, America was divided the moment it became a multi-ethnic society. What has happened in recent years was simply an occurrence of the inevitable. White people have a right to exist. Multiple factors such as increased immigration, forced integration, etc. are contributing to our decreasing influence within our own countries, and possibly to our eventual demise. Pushing away from ethnic and cultural suicide is a natural response. It is those who embrace their doom and wish to remain “unified” with the very means of their destruction who are truly misguided.