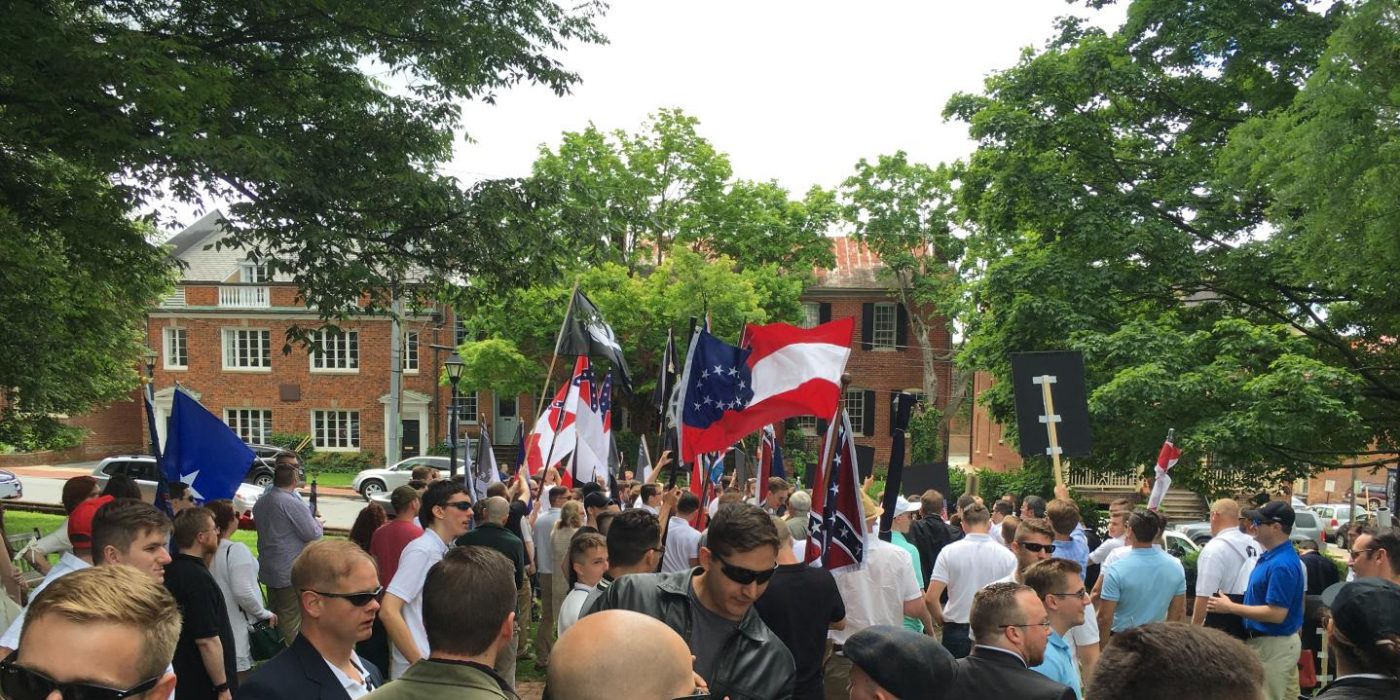 Charlottesville Is A Turning Point For The Alt-Right

An insider account of what went down in Charlottesville.

An enormous show of strength and power was revealed this past weekend in Charlottesville, VA as members of the Alt-Right led by Richard Spencer, Evan Thomas, Sam Dickson and Nathan Damigo overwhelmed the small southern town in historic Virginia that is currently infested with some of the most disgusting and odious leftists in the country.

Our forces numbered around 200 and they came from all around the country. We marched down the streets of the completely unexpecting town and surrounded the Stonewall Jackson monument.

We took the park and claimed it as Alt Right territory. Our many flags were waving high and proud in the wind as we took our positions for our flash mob demonstration. Richard Spencer spoke first saying, “We are here to say no; no more attacks on our heritage, on our identity; no more attacks on us as a people. Nathan Damigo, the leader of Identity Evropa, went on to say, “This fight is essentially a demographic struggle for the future of western civilization.” Without western people, western civilization doesn’t exist.

Simultaneously and ironically the citizens of Charlottesville were hosting a multicultural festival the same day as our demonstration (which we had no idea was going to take place).

We learned the festival would not include any European food, music or art. How “multicultural” indeed. This distasteful act by the local government and citizens is just one of many actions taken to erase the history and memory of the white southern people in Charlottesville.

People began to drift over from the multicultural festival to start picking a fight with us. They were like hyenas, coming in at us to sneer and spew their bile. “Rayyyycist!xD!” – they screamed at us. None of them had anything else to say. Just hysterical verbal diarrhea. No valid or finished points. Just braindead sheep programmed with three action phrases and roaming abilities. As we finished the event

As we finished up our demonstration, these same people began following us from the park, screaming and harassing us. Attendees of the festival were flashing multicultural flair at us while standing on park benches. There were even women in hijabs that were recording and yelling at us. These people were on the roads causing traffic to slow and stop while the cops were yelling at them. As we left, we could see that these triggered multi-cultists thought that they had chased us off for good. Little did they know that we would be back for more.

As night approached we gathered in a nearby park and then marched on Robert E. Lee’s statue. We held a flame lit vigil to pay respect to our heritage, our ancestors and to those that took a rebel stand against an anti-Southern government more than a hundred years ago. We stood 6 rows deep in a visually striking demonstration of power and control with our torches ablaze. We stood in solidarity as one. Evan Thomas guided us throughout the ceremony with encouraging and beautiful words. Sam Dickson and Richard Spencer both gave heartfelt remarks that will be with all of us forever. We let out rebel yells and chants into the night. We felt our voices carry and echo throughout downtown Charlottesville. “Blood and soil!” “Russia is our friend!” “No more brothers wars” and “You will not replace us!” Rang throughout the town.

We stood strong as opposition started to mount. We were peaceful and respectful and held our event for a half an hour. No police got involved in our demonstrations until the end of the night when a crazed lone Antifa scumbag snuck around behind our group and pounced on one of our unsuspecting members who had his guard down. He struck him in the head, nearly knocking him out and leaving an instant knot the size of a goose egg behind. The ignorant Antifa clearly didn’t understand who he was dealing with. He quickly got…re-educated by the White Bloc. 30 tiki torches lashes across his head gave him some much-needed clarity. Poor guy, he must have confused us with the Tea Party or something.  It was only after the Antifa tried to attack us that the white female protesters called the police and they busted onto the scene only to physically remove the Antifa scum bag… and leave us in peace.

After the event and a long day of winning, we went back and threw an Alt-Right house party and celebrated our victory. We sang songs, laughed and most of all just enjoyed the mental high you feel after an incredible win.

As for Antifa, they’re openly assaulting people in the streets now, and they actually seem to think they can get away with it. It seems that they’ve gotten used to kiddie glove treatment in recent years. They hide behind the banner of Black Lives Matter but incredibly, these are the same people who assaulted a black teenager the next night at a counter-protest that was organized by vice mayor Wes Bellamy. The black teen (who actually wuz a gud boi who dindu nuffin wrong) happened to show up at their event with a differing opinion and was assaulted. He wasn’t the only one, Daily Caller journalist and fearless hero Jason Kessler tore down the banner hauled up on the statue of Robert E. Lee. He was assaulted and eventually arrested as well for his efforts. It is amazing that he got out of that crowd intact, without any stab wounds to show for it…

Our Identitarian rally didn’t have any of the lawlessness that the vice mayor’s rally did. And the protesters that showed up to our rally weren’t assaulted, in stark contrast to what happened at Wes’ rally. Hell, we even had a BASED black kid. He wasn’t called one name or so much as even looked at with a glare at our event. In fact, he was taking pictures with our members and wasn’t once made to feel unsafe. Contrast that with the treatment he received at Bellamy’s rally.

Many of the anti-White efforts and actions being carried out in Charlottesville are organized and encouraged by Mayor Michael Signer and his pet, vice-mayor Wes Bellamy. Bellamy, who is an anti-White, published several tweets between 2009 and 2014 using gay slurs, threatening comments against white people, lewd remarks about rape, slang for female genitalia and other profanities. I guess he was keepin’ it real, keepin’ it gangsta. Many of the old tweets show a stark contrast between his more recent posts lauding women’s and LGBTQ rights.

The man is a joke and obviously jealous of white men and our accomplishments. I suppose Bellamy will be happier when he has re-established Charlottesville with Martin Luther King Jr Boulevards and Malcolm X high schools. It wouldn’t be a proper black city until all white supremacy is removed and replaced with liquor stores, pawn shops and black criminal violence like every other city in America with black government officials and a diverse population that needs mo’ money’ fo’ dem programs.

I came out of the event realizing that our struggle really does affect all white people in America now. There is nowhere left to turn and nowhere to hide. Our enemies are just about ready to spill blood and they won’t stop until they get it.

So what will you do?

Will you let them replace you? Will you just roll over and let them run roughshod over White culture and White people? Or will you join us?

We hope to see you at the next rally.