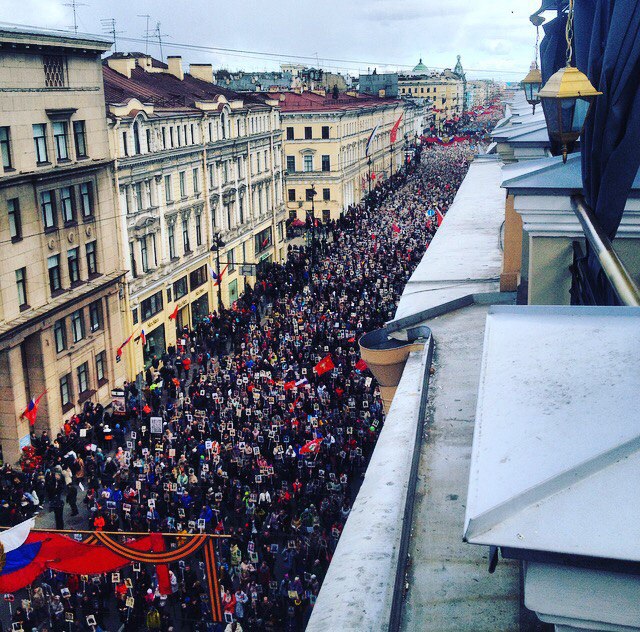 May 9th is the biggest civic holiday in Russia.

These marches all have a volunteer portion to them now as well. They call it the Immortal Brigade. Literally millions of Russians show up with photos of their grandparents and great-grandparents that fought in the war and march down the main street. It is a huge part of the Russian government’s program to revive civic nationalism in Russia. The great victory against all odds in World War 2, the Orthodox faith and the sports program are 3 of the main columns of the program to revive civic pride that the Kremlin is pursuing. Naturally, this march is a big deal. It became an even bigger deal after the events in Crimea as the lackluster parade suddenly became a massive civic phenomenon. Overnight, the parade became absolutely huge, reaching crowd sizes even larger than those in 1945.

The liberals were quick to downplay this natural outpouring of patriotic sentiment, but the truth is that they were completely floored by what they saw, and no amount of nit-picking about numbers and accusations of paid attendees could mask the truth that literally millions of people almost spontaneously were marching all around the country.

Now that I’ve stuck my usual shiv into the Liberals, I can move on with my personal observations.

I could not help but notice some of the messier details of the march. For the most part, these were not locals participating. People that marched in the Immortal Brigade drove, metroed or trained in from the suburbs or even neighboring cities. St. Petersburg’s center is filled with hipster SWPLs. None of them were present, not even as bystanders along the routes. After living in a city for enough time, you can tell who belongs and who is visiting, who lives in the bohemian center, and who had to come in from the suburbs.

Also, the crowd was middle-aged or older.

There were virtually no young couples in the crowd, and hardly any students. This was despite the fact that May 9th is a holiday and they almost certainly had the day off. There were young kids in the crowd, but they came with their families. After the marchers made the trek along the entire length of Nevskiy Prospekt, they settled into the parks and started relaxing, eating sandwitches and of course, drinking.

I peeled off from the march near the end to go into a cafe that I knew had a balcony on the top floor with a breathtaking view. Naturally, its one of those SWPLy hipster haunts. The place is usually filled with the most bohemian fashionable types that have nothing better to do with their time. Today was no different. Despite having a balcony with a view of millions of people marching with flags and banners and music, the hipsters could not be bothered. They remained where they always do- lounging on the divans, bathed in hookah smoke.

Right after I rejoined the march, a fight broke out right in front of me. Two Vibrant groups were beating each other with the sticks that are used to hold up the photos of relatives. One man fell to the ground, his head covered in blood. The other group started kicking him until the police stepped in. It all happened very quickly. Everything was calm and then suddenly- CHIMPOUT.

The two groups were Armenians and Azerbaijanis. The Armenians took offense to the Azerbaijani flag being flown among the group of Azerbaijanis and so they attacked them. I almost immediately began to start worrying about whether the civic nationalist program could possibly hold up in Russia- especially among the Bashkirs who hate the Tatars or the Chechens that hate the Dagestanis and the X who hate Y groups. The answer is that there will be peace as long as there is strong centralized Russian power making sure to break up every single fight before it gets too out of hand.

Meanwhile, the future should worry the Kremlin. The youth are drifting away from the program and increasingly becoming Nationalists or Navalny-type Liberal Nationalists.

A couple of days before the march, I met up with the Russian nationalist group, the Black Hundreds. I was very impressed by their organization. Although I hate to admit it, it was far more organized than our organization in the United States. They have their own bars, their own printing house and an extensive network of peers. I suppose it is easier in Russia, where there is no White Guilt to speak of and a good deal of racial friction anyway.

They were all aged about 25-35 and all clearly middle-class to upper-middle class. These are the Bobo Nationalists of Russia. In that sense, they are just like the Alt-Right in the United States, Nordic Youth over in Sweden, Generation Identitaire in France and Austria. They didn’t really participate in the marches either.

It was surreal to hear Alt-Right talking points repeated to me in Russian. Many had read Kevin MacDonald and knew about Richard Spencer. Some sported a fashy haircut. It got me wondering if maybe Globalization wasn’t such a bad thing after all.