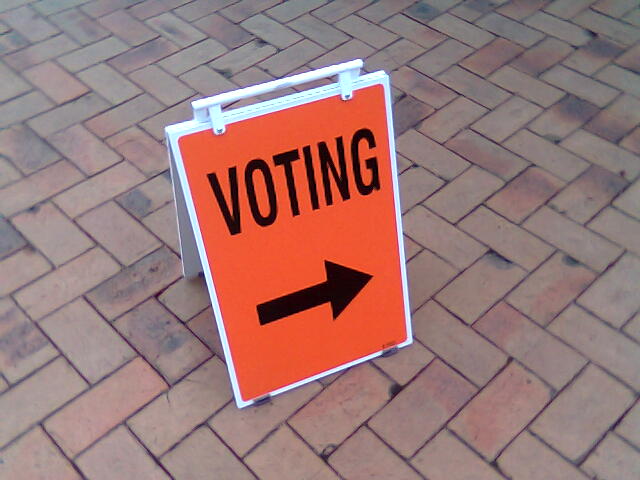 Renouncing The Electoral Process Is A Path To Nowhere

Disdain for elections and democracy is simply a self-congratulatory mask for incompetence, laziness and inability to rally the masses at the polls.

**
The recent defeat of Marine Le Pen in the French presidential election has predictably triggered yet another tidal wave of haughty pronouncements by Alt Right adherents scornfully rejecting elections as a means of achieving our goals.  “We’ll never vote our way out of this!”  “Elections are a waste of time!”  “Democracy doesn’t work!”  The same chorus of noisy negativity broke out into mournful song the instant Trump began to cuck for the establishment last month.

This is a perennial phenomenon among the Alt Right, or I should say within the so-called white nationalist movement.  We try to win through elections, we get our hopes up, we work our asses off, we get defeated – and we immediately begin wailing, gnashing our teeth and shaking our fists at the heavens as we swear off elections forever.  This life cycle memorably played out in Britain during the late 90s and early 2000s, with the rise and fall of Nick Griffin’s BNP.  But the cycle is much older than that.  Here in America, the failure of the Wallace campaign many years ago led to the formation of a number of “educational” organizations which completely renounced political electioneering in favor of simply selling books and spreading propaganda.

Always with such efforts, the unspoken hope is that eventually, enough people will become “educated” to somehow lift us up to power without having to run in elections at all.  Fantasies of seizing power in an armed struggle at some distant date are preferred as a warm and comforting tonic to frustrated activists freshly reminded of their real-world political impotence.  The greater the feeling of powerlessness, the more lurid the fantasies of taking power.  The greater the political irrelevance, the more comically arrogant and imperious the boasting of absolute disdain for voting, democracy and the electoral process.

I have a thesis:  this attitude is nothing but defeatist faggotry.  It is extreme weakness masquerading as strength.  It’s the equivalent of a child not winning a school contest later claiming they never wanted to win anyway.  It’s someone who can’t dance and terrified of getting humiliated on the dance floor saying dancing is stupid and they never wanted to dance in the first place.  If I may offer some gentle criticism:  our movement is filled with pretentious eggheads who simply have no connection with the people.  For borderline-autistic ideologues lost in abstract theories to congratulate themselves for not engaging in elections is no different from the sheep congratulating itself for not tearing out the throat of its rival.

All those who consider themselves part of the Alt Right should immediately watch Alec Baldwin’s famous sales speech from the 1992 film “Glengarry Glen Ross.”  This is the best advice I can give to the Alt Right when it comes to complaining about lost elections.  “Always be closing!”  The film was written by homosexual Hebrew playwright David Mamet, a man who knows a thing or two about persuasion, from a race which knows a thing or two about persuasion.  No matter how one may feel about the JQ, one must admit they picked up a few things during all that wandering among the nations.  The scene is famous for explaining the AIDA process of sales, from the moment a consumer becomes aware of a product to the final purchase decision.  This model is critical to understanding the gigantic propaganda task of the Alt Right, but this is a process which many of our sneering would-be monocled aristocrats believe they can circumvent altogether.

Elections are difficult.  It takes an enormous amount of time, effort, resources and almost infinite patience to go door-to-door, house to house through neighborhoods trying to persuade people to vote for your candidate.  In the United States, we have to contend with ballot access petitioning which makes the task of even appearing on the ballot into a Herculean effort.  The masses are lazy, stupid and distracted.  When you engage with them directly, you come face to face with a nearly impenetrable wall of ignorance.  Robert’s Rules of Order, conventions, delegates, executive committee meetings, canvassing, Get-Out-The-Vote efforts are all horrifically tedious, unsatisfying, draining and demoralizing.

But guess what?  That is exactly what we must do.  It’s not the only thing we must do.  There are plenty of other areas where we need to train, organize and struggle.  Shitposting and physical defense training are both vitally important.  There are many other areas where we can change attitudes and fight the system.  But we must have a presence in our elections, and it must be sustained and growing.

The process of contending elections is more important than the end result.  We always need to have a direct line of communication with the masses of the people.  And by that I mean an immediate neighborhood, IRL connection.  We need to be able to talk to the poorly educated and the elderly, the wealthy Gen X suburbanites and the rural people.  There are millions of depoliticized white people out there with whom we must connect.  It’s almost more for our benefit than it is for theirs.  It gets us out of the world of flickering screens and smartphones, social media and complex, difficult-to-decipher memes and into the real world day-to-day life problems and concerns of the people.  From that continual feedback we can hone and sharpen our message.  We can let those people teach us how to communicate with them, how to understand them, and ultimately how to forge their communities into fortresses of resistance against the system.

Elections have definite results.  They are brutally unambiguous in their merciless finality.  At the end of an election campaign, you have a result, a number, a percentage, and it’s either victory or defeat.  By that result, you can measure the effectiveness of your outreach and propaganda.  It’s a reality check on too much online theorizing and fantasy.  It grounds you and keeps you focused on political reality.  It forces you out of your comfort zone.  It forces you to build new skills, to adapt and learn new methods of communication and persuasion.  It separates out the talkers from the men and women of action.  Because it takes such dedication and hard work, it automatically selects the individuals most worthy of leadership and responsibility.

Political parties are also covered by legal protections which exceed those of every other type of political organization in the United States.  Civil rights legislation designed to protect voting rights also extends to political parties and candidates advocating for the interests of white people.  Advertising space must be charged at an equitable low rate.  It’s a fantastic way to get out the message.  It gives us a powerful excuse to go out and knock on doors, get our signs up, our leaflets out, our radio and TV spots airing.  All this builds momentum and increases presence and awareness.

AIDA stands for “Attention-Interest-Decision-Action” (or Desire-Action).  As the Alt Right, we don’t even have the attention of most people.  If you think we do, go knocking door to door in your local town and see how many people have heard of the Alt Right.  We’re not even past the first step.  We need to get their attention, and then once we have it, we need to convert that to interest, and so on.  Each step in the sales process is a trial, a difficult period of effort and feedback and self-critique and experimentation and refinement.  Trump understood this intuitively, because Trump is a born salesman from a world of salesmen.  His betrayal of our interests has nothing to do with his sales ability.  We should learn from Trump.  We could use the same methods to win people over to our cause, without cucking out like Trump did.

Will we simply vote our way into power?  Of course not.  Only a naïve fool would ever think that.  But no matter what means or combination of means we use to take power, we must build strong and popular support among the people.  We must have that direct, IRL neigborhood connection, and there can be no excuse for not building it.

Elections are the best opportunity to build that connection.  But this isn’t going to be comfortable or easy.  We must increase our tolerance for discomfort and get used to rejection.  We need to learn to think and act like professionals.  We can’t threaten to pack up our toys and go home every little time we don’t get our way.  Anyone who has ever read Ernst Junger’s “Storm of Steel” would know the life of a WW1 storm-trooper was mostly digging trenches, sitting in cold wet mud, hunkering down during bombardments and sleeping with rats in the dugouts.  The final charge, the rush of the attack, was the rare moment of excitement in a life that was nine-tenths boredom, drudgery and routine.  This is the life of a soldier, and it’s also the life of a political soldier.

We must be as political soldiers, not hobbyists or thrill-seekers or impotent wagecucks secretly LARPing by cover of night as internet revolutionaries.  If we continue to make excuses and throw temper tantrums as an excuse for incompetence and inability, we will remain a marginal force in real-world politics.  We have to learn the skills to communicate with the people.  We have to master the sales process.  We have to be smart, and work hard, and learn to endure a little disappointment without whining and giving up.  If we do, we will open another massive front against the enemy and we will advance our cause towards final victory.