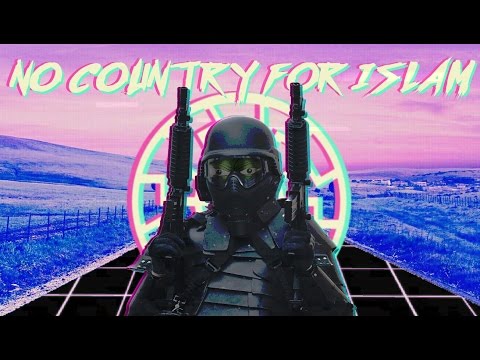 Jossur Surtrson delivers a rallying pep talk about the necessity of learning to hate again.

Ours is, has ever been, and ever shall be, an eternal war against entropy in its many forms. A struggle for survival in a cruel, uncertain, and apathetic world, against social and cultural decadence and malfeasance.

And now, due to our inaction and acquiescence in the face of forewarned eradication, the European race is confronted with complete and utter annihilation at the hands of forces who are no longer satisfied with being indifferent to our plight, but now will, and move toward our destruction.

This is the clarion call that beckons all Europeans the world over to awaken and witness the great replacement. Your future and that of your people rest squarely upon your shoulders.

You must not fail them.

It is time we rekindled the flame of Furor Europeicus. That indignant, hateful frenzy earned from the Romans in battle by our glorious ancestors, whispered of only in hushed tones, which struck fear in the hearts and minds of the enemy and furthered our progeny’s survival.

“Deep is the hatred that fuels vulgar souls against beauty.” – Ernst Jünger

Deeper must your hatred be toward this vulgarity, this aberration that wishes to dispose of you. If we are to survive as a people, as a distinct and most unique race, we must learn again to hate those who hate us.

We have turned our backs to our ancestors, besmirching our sacred duty, and dishonoring their legacy by allowing the dissolution of the identity that they passed down to us.

We have fallen. In the eyes of our detractors, we are now a race more renowned for its weakness and cowardice in the face of opposition rather than courage and strength of conviction that was once unparalleled. European men are satisfied, accustomed to, and in the spirit of cultural ecumenism, even encourage the annihilation and subsumption of their posterity in a pathetic attempt to avoid being deemed ‘racist.’

Slowly but surely does the rootless tree fall.

There are those who are party to a growing apologetic movement that pledges their undying love and devotion to their principles, standards, and traditions, all the while willingly ignoring the culture that gave rise to them. This love, they proclaim, has no room for hate. To them, culture precedes race.

They shall perish by the hand that feeds them.

These aforementioned supplicant cowards who, on bended knee, implore non-Europeans to try and understand just how much they do not hate others but simply love their own are maddeningly incapable of realizing their folly. They either wallow in shameful denial or are mentally ill.

No matter the case, they remain out of touch with their natural instincts. If they were not, they would understand that to know love, that is true love, is to know hate.

Enmity is an absolutely vital component of the human condition. Without it, one is not whole. His soul is diseased. To dispense with it, to ignore it, is to become inhuman, to be artificial.

Those that believe they have a limitless capacity to love everyone and everything unconditionally are severely deluded and focused on a similarly artificial abstraction of an anesthetized infatuation. One cannot simply love everyone as true love assumes hatred. Therefore love and enmity are one, symbiotic in relation and inseparable. They cannot be bifurcated and treated independently as this would imply dualism.

One who truly knows love knows the true meaning and spiritual source of hatred. Love and hate are bound eternal just as truth and falsehood, good and evil. You cannot fully express love without expressing hate.

One must not use the terms hate and enmity loosely. The type of hate one must embrace, however it may manifest, is forged and enlightened by the love one has for that and those which he considers his own, his kith and kin, his friends and loved ones, his home and his way of life, his racial family.

By nurturing one’s love for his own, he subdues and eventually eliminates blind and ignorant hate. From this, an informed, controllable, focused hatred emerges, that Furor Europeicus that complements and further strengthens one’s love and resolve to protect and defend his own.

You must give in to your base instincts, Europe, for you now stare extinction in the face. You must cease and refuse to live in denial a second longer of an enemy that scorns and curses your very existence. Never before in history as a race have we faced such an existential threat, for even millions of our own stand against us.

You must learn to hate again and it must be the deepest, most visceral hatred for those who readily stand united against you to cast you and your posterity into oblivion. You must conjure and nourish an unrivaled enmity toward those who wish your daughters slaves and your sons corpses, for your enemy – and indeed they are your enemy – hates you with every modicum of his being and his increasing number shall stop at nothing to see all you hold dear destroyed. Do not expect them to play by any rules. There can be no longer be any standing upon ceremony, no observance of convention or agreement. You must dispense with such notions as rights and treaties, the assumption of adherence to so-called rules of war, for the enemy will scoff and disregard them. An enemy with no boundaries or restraining moralisms in the heat of battle can only be met with the same disregard.

This is your reality.

But what is reality to the enamored and complacent? What is truth to he whose spirit refuses to be stirred into action by it through willful denial of circumstance?

Lift the rose-colored veil from your eyes, Europe! Tremble and be stirred into rapacious fury at the horrors staring back at you, at the ignorance and welcomed nihilism that has befallen your brothers and sisters, sons and daughters. Your people are poisoned and suffer the notion that they deserve their fate, that they warrant being erased from existence!

It is never too late to war against this downgoing Let your enmity become you. It must become you. It must consume you, permeate down into every corner of your soul. It must drive you daily, every second of every minute, of every hour. This hatred will transform you, forging action from complacency, cultivating and strengthening your courage and determination to fight, leaving a lion where once stood a lamb.

When you emerge from the tempest of renewal, you will finally know what it truly means to hate and love. Your mission will become clear. You must, at all costs, stare down death and deny him his prize. You must protect and defend your people, thereby restoring the nobility and honor of Aryan man earned in blood and bequeathed to us by our ancestors.

“We must secure the existence of our people and a future for white children. Because the beauty of the white Aryan woman must not perish from the earth.”

These words are not mere cliché. They are not some banal catchphrase to be tossed about lightly. They should be your life’s work and adherence to them should find expression in everything you do.

Shame should overwhelm you and repel your sleep each night that you lie to rest without service to your people, without having accomplished something to help further secure their survival.

And when your final hour comes, remorse and dishonor will tarnish your memory should you have failed to toil and strive to guarantee Europe its future.

Be ashamed to die in such a manner, oh Europe, for an honorable death must be earned!

Your hatred, your enmity now lies dormant. Let it become you and it will show you the way forward. Onward we press, onward we fight, for by this we shall survive.

Breathes there the man, with soul so dead,

Who never to himself hath said,

Whose heart hath ne’er within him burn’d,

As home his footsteps he hath turn’d,

From wandering on a foreign strand!

If such there breathe, go, mark him well;

For him no Minstrel raptures swell;

High though his titles, proud his name,

Boundless his wealth as wish can claim;

Despite those titles, power, and pelf,

The wretch, concentred all in self,

And, doubly dying, shall go down

To the vile dust, from whence he sprung,