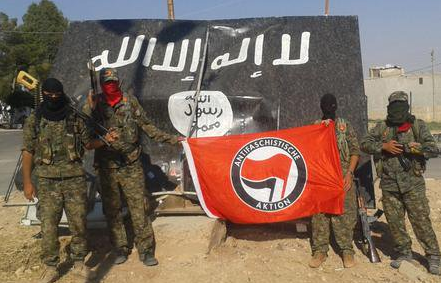 Antifa Is Arming Up And Preparing A “Maidan” In America

Antifa is Live Action Role-Playing in Syria and preparing for something big at home.

I decided to take a look at some Antifa propaganda the other day. It’s pretty professionally done and they have some very interesting footage of /ourguys/ that I hadn’t seen before.

Someone’s putting some money behind the effort, that’s for sure.

The video is a bit long though, and I don’t like being cucksplained to about worker’s rights from upper-middle class White Trustafarians funded by open-borders advocates like Soros, and I assume you probably feel the same way.

So let me summarize the interesting bits of the video for you. Antifa brags about ramping up their training efforts and even training abroad with the Kurds. The United States is training the Kurds in Syria, and the YPG is allowing foreign fighters to come LARP alongside them. The United States’ involvement in the region is very murky, and accounts of Antifa getting training there make it even murkier. But there seems to be little doubt that someone is deliberately destabilizing the region.

It’s almost similar to the whole Spanish War scenario, except I have not heard of any “fascists” volunteering for Assad’s army.

They also explain their origins on the North American continent in the video. Unsurprisingly, they got their start in Canada. But, don’t take their word for it, just ask Gavin.

Gavin likes to brag about his Anarchist days fighting Nazis in Canada. Congrats old man, Whites everywhere are much better off in Canada now, all thanks to you. If anyone knows about the origins of the Antifa scene here in North America, it’s probably Gavin McInnes, who by the way, is considered a literal Nazi by Antifa now. Oh, the irony.

The video talks a lot about the splits within the Alt-Right, especially the Alt-Lite/Alt-Right split. They’re right about that part. The Alt-Lite seems hell-bent on proving to Antifa that they are even more “anti-Nazi” than they are. “We da real libruls!” is the rallying cry of the Alt-Lite.

But if you listen to what Gavin has to say, then its Western Chauvinism that the Alt-Lite is all about (and collecting Jewish paychecks). They are proud of everything to do with the modern West and want to conserve it all. Even the parts that are slowly killing it. Good luck, fellas. You’re just a stepping stone for new Alt-Right members and we greatly appreciate the work you do.

But it seems that the situation with Antifa is not as rosy as all that! Many of their members seem to barely be getting by. Antifa has been in the news and getting doxxed left and right by both the Alt-Right and the Alt-Lite. They’re proud of being street-fighters because they probably spend a lot of their time actually living on the street.

This guy tried to crowdsource money to pay for his rent at some point. Some of the desperados in Antifa’s ranks seem to be living Soros paycheck to Soros paycheck. They’re not even working class. They have been reduced to a permanent violent underclass- just as planned of course.

Oh and depending on whether you want to believe this guy or not, there may now be PMCs operating from within the Antifa crowd as well.

(Skip to the 5 minute mark)

If this is true, then Antifa is transitioning to the Maidan model. Left-wing activists for the cameras in the front, armed muscle in the back to escalate the situation. Think about it. What will happen when the volunteers from Syria return home? Antifa, and all these street activist groups in general seems to be part of an international cadre of consulting color revolutionaries.

Kind of like these guys. And just like Otpor was used in the Arab Spring and in Euromaidan, I suspect a similar role is planned for Antifa at home.

And what is the goal?

(((Someone))) is encouraging the useful idiots to stir up trouble, and create chaos. We see these same tactics already being used abroad, but I suspect that this time it will be a theatre much closer to home.