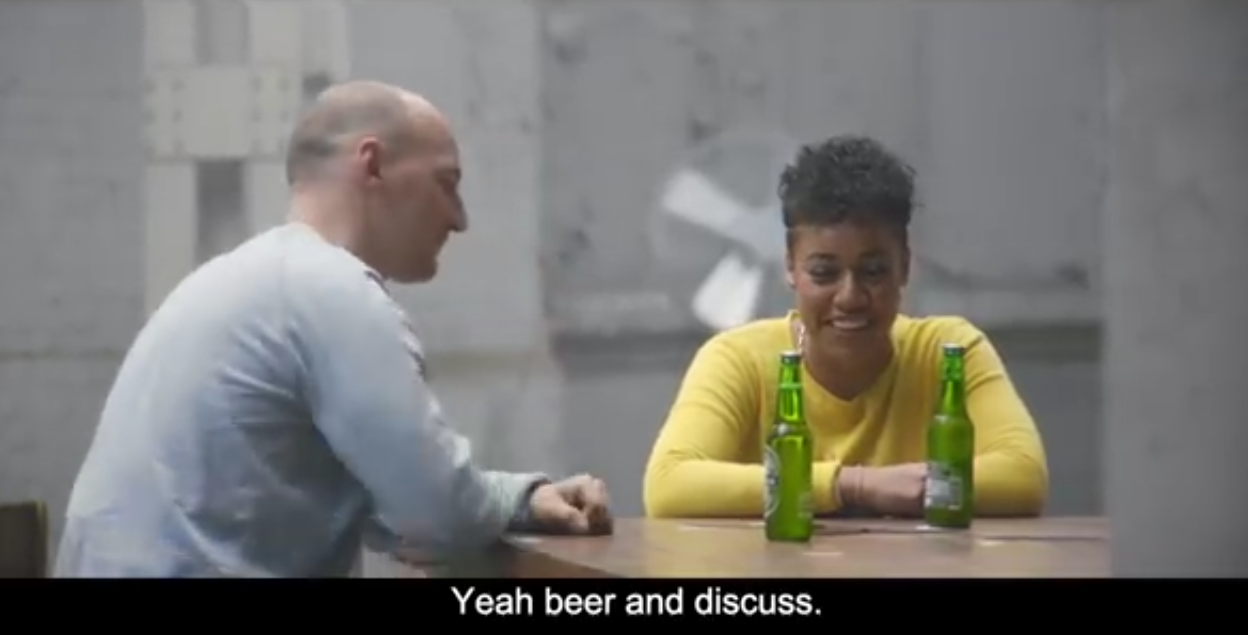 MNCs have a lot at stake in creating a complacent coffee-colored blend of consumers to keep buying their crap.

Heineken recently released a video about different people with different points of view getting along over a bottle of cold Heineken ™ beer.

Funny how the evil white men without Current Year views are the only ones depicted changing their opinion and giving ground… And apparently, this whole trans-gender thing is going mainstream. I remember only hearing about these sorts of people on /pol/ a couple of years ago and thinking it would never ever catch on with the public. How naive I was…

There’s a lot of truth to this video, but you can only see it if you read between the lines. This is a fairly accurate depiction of what Heineken and just about all other MNCs want. They just want us to all get along…and buy their stuff. They want us to be conciliatory…so that we buy their stuff. They want us to meet each other halfway and agree to disagree…except when it comes buying their stuff. That part is non-negotiable. Our natural identity ought to be replaced with brand loyalty, that’s the only real way we can express group solidarity anymore. Team Mac vs Team PC. That’s what really defines us in 21st century Weimerica.

Heineken isn’t the only company that’s been cashing in on volatile political times.

The now infamous Pepsi commercial gives us a glimpse into the world that the MNCs want as well. Hipsters and Vibrants getting along, united in their righteous love against the White man (symbolized as usual by the police). Everyone wears the colors of their new tribe, the blue team, Team Pepsi of course. Surprisingly, the spontaneous uprising of the oppressed POC and the fake poor Hipsters is entirely attended by thin, good-looking, fashionable folks. The Multi-Kulti future, of course looks nothing like that.

Meanwhile, reality looks nothing like what paid actors hired by MNC in-house marketing teams portray it as…

A disturbing hate crime has come to light. From the New York Times:

A man killed one student and wounded three others on Monday at the University of Texas, walking calmly from one to another and stabbing them with a bowie knife, setting off panic and rumors of a larger wave of violence.

The university police identified the suspect as Kendrex J. White, a 21-year-old student who was quickly arrested. Witnesses described the suspect as eerily composed during the episode near Gregory Gymnasium, and said that when he was confronted by police officers, he did not speak or appear to hurry.

Rachel Prichett, 19, a student from Austin, said she was standing at a food truck when she heard screaming, turned and saw a man holding what looked like “a small machete” approaching her, “just walking calmly with the knife to his side.”

The suspect walked behind a man a few feet away from her, then grasped the man’s shoulder with one hand and with the other hand stabbed him in the back, thrusting the knife “all the way in.”

Ms. Prichett said she fled, running past another victim, his head bloody, who was slumped over a table.

In recent weeks, fraternity houses at the university had been vandalized with messages accusing them of promoting racism and rape. Many people on campus speculated Monday that the knife attack was related.

But Chief David Carter, of the University of Texas at Austin Police Department, said the authorities did not know of a motive for the stabbings. Speaking at a news conference, Chief Carter said that he was aware of the rumors but that he did not know if the victims, all men, were fraternity members.

Mr. White is black. Chief Carter said the four who were stabbed, all age 20 or 21, included three white men and one Asian-American man. One died at the scene, and the others were taken to the university medical center. The authorities did not immediately release the victims’ names.

School officials in Graham, Tex., identified the student who died as Harrison Brown, according to The Austin American-Statesman.

It is a strange state of affairs isn’t it? The man who was killed was a White guy who’s last name was “Brown”. He was killed by a Brown Guy whose last name was “White”. Like Ebony and Ivory. Hmm, I wonder, if they had just shared a Heineken ™ or Pepsi ™ together, maybe then they would have been able to get along? Tell the marketing department to start working on the script for that ad.