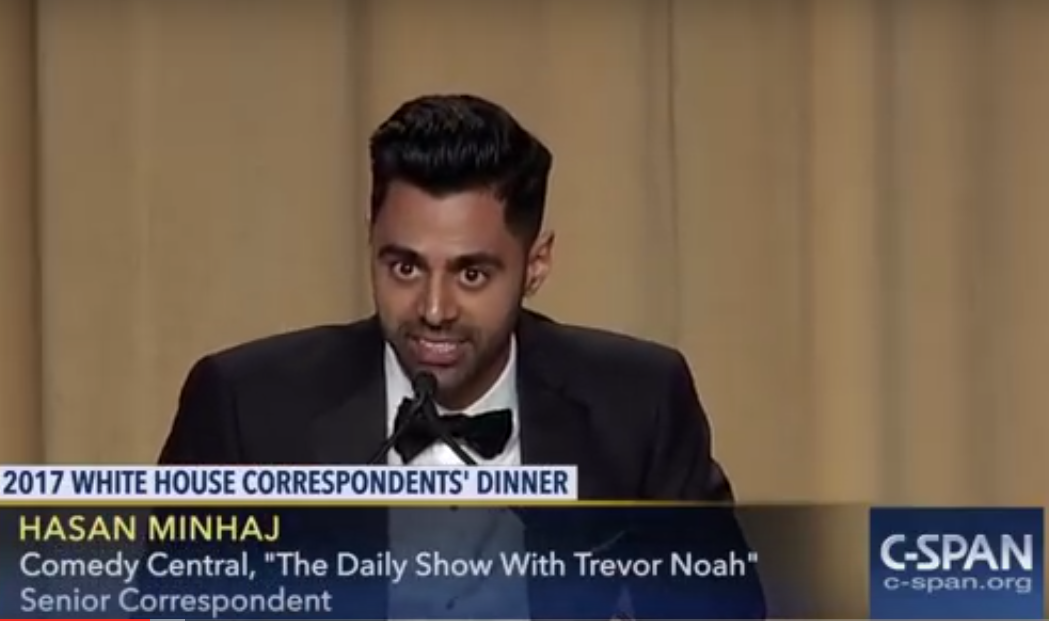 A literally who shows up to the White House Correspondent's Dinner, and cracks jokes about there being too many White people in the room.

I completely missed the whole debacle over the White House Correspondent’s Dinner. And I’ve never heard of Hasan Minhaj before. I also haven’t watched Comedy Central since Barack Obama got elected the first time. To my surprise, the Daily Show is still a thing, just run by another guy named Diversity Hire. And they now have this incredibly unfunny Muslim cracking jokes about Donald Trump that got invited to the White House Correspondents’ Dinner.

The press met up and had their dinner despite Trump and his team not showing up to join them in the festivities. Hasan actually had a few decent moments like at the 13 minute mark where he starts to tear into the MSM for betraying the American public’s trust, but then switches tracks and starts puttering on about O’Reilly and racism against Muslims or something. He comes back to the theme of the media being dishonest several times in his “comedy routine.” Including the whole Russia conspiracy angle that they have been shilling nonstop in the hopes that it somehow sticks. Hasan calls them conspiracy theorists who might end up wearing tin-foil hats and pissing into urine jars at the rate that they are going.

The audience gives him sympathy chuckles throughout the whole performance, but it is obvious that they’re not into it, despite the forced smiles and occasional claps. In general, the atmosphere is like nails being dragged along a chalkboard the whole time.

It reminds me of another speech given to a gathering of Elites that didn’t go over too well.

The only jokes that went over well with the crowd were the jokes about being brown (20:48). The predominantly White and Jewish room let out relieved laughs when Hasan talked about how racist Trump and American was. They seemed to feel that they were back in comfortable territory, on the same page again.

That is until Hasan reminds them that they’re all too damn White (21:32). And then they all have to laugh and applaud to show that they agree with the brown man onstage. And you know what, they really are all too damn White aren’t they? A bit too privileged too…but as long as they mouth off PC platitudes they hope no one will notice. It seems that minorities are starting to notice though, and mouthing off liberal talking points about being one of the Good Whites just isn’t cutting it anymore…

The whole routine is littered with references to popular culture like Harry Potter and the Hunger Games. I wonder if the older crowd in the audience thinks that listening to Hasan makes them hip and jiggy with the youths or something. Overall, it was pretty terrible. 100 miles away from the cringy spectacle however, we saw a bit of the old Trump rise to the surface again. Pat Buchanan had a pretty good write-up about what happened:

Before thousands of those Middle Pennsylvanians Barack Obama dismissed as clinging to their Bibles, bigotries and guns, Donald Trump, to cheers, hoots and happy howls, mocked the media he had stiffed: “A large group of Hollywood actors and Washington media are consoling each other in a hotel ballroom … I could not possibly be more thrilled than to be more than 100 miles away from Washington’s swamp … with a much, much larger crowd and much better people.” Back at the Hilton, all pretense at press neutrality was gone. Said WHCA president Jeff Mason in scripted remarks: “We are not fake news. We are not failing news organizations. We are not the enemy of the American people.”

Trump’s showdown with the media is endlessly entertaining. Trump may not be delivering on the promises that many on the Alt-Right wanted him to make his priority, but he is still locked in a death match struggle against the media. The rapprochement over Syria has proven to be temporary. Trump hasn’t been forgiven, and he clearly isn’t in the mood for having drinks and letting bygones be bygones over dinner. They are still at each other’s throats, and that is a good thing. Trump seems to have taken one lesson from Bannon after all: he understands that the media is the true opposition party and it needs to learn its place.